The blossoming of this time of year brings to my mind a story from that old Welsh cycle of myths, the Mabinogion. It goes a bit like this:

The fair Arianrhod didn’t have much time for her son. He was born, rather inconveniently, just as she was undergoing a very public test of her virginity. Premature, he was scooped up by her brother, Gwydion the magician, who incubated him in a chest until he was fully formed, and raised him till he was old enough to claim his inheritance. But Arianrhod, shamed by his very existence, wanted nothing to do with the lad, and gave him a threefold curse: He was to have no name, no weapons, and no wife, unless she relented and gave them to him.

Gwydion had other ideas for his nephew. He arranged for Arianrhod to witness the boy’s skill in archery, resulting in her accidentally naming him – Lleu Llaw Gyffes, ‘lion with the steady hand’. He conjured up a phantom army to attack Caer Arianrhod, his sister’s fortress, obliging her to arm her son to defend it. But a wife was more difficult. And without a wife, Lleu could inherit no lands.

Undeterred, Gwydion took nine blossoms – primrose and bean, burdock and nettle, hawthorn and chestnut, broom, oak and meadowsweet – and created a woman from them. He brought her to life with his powers, and named her Blodeuwedd, ‘Flower Face’. 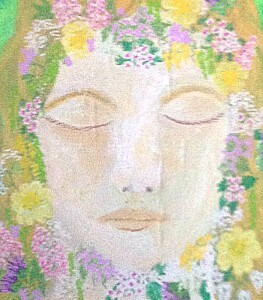 Lleu was delighted with her. What man wouldn’t love the idea of a woman being created purely for him, to be everything he could possibly want? Nobody seems to have thought to ask Blodeuwedd what she wanted. Why would they? She was married to Lleu – what more could she desire?

But one day while Lleu was away on business, Gronw Pebr, the lord of Penllyn, arrived at the door of their stronghold, and she decided that it was him she desired. And the feeling was mutual.

The lovers plotted to kill Lleu, but that wasn’t such an easy task. Gwydion had woven spells around him, protecting him from death by day or night, outdoors or indoors, on foot or on horseback, clothed or naked, with any lawful weapon. As always, there was a loophole, and Blodeuwedd managed to wheedle it out of her unsuspecting husband.

‘If I were to go out at dusk’, he said, ‘clothed in a fishing-net, outside but under a canopy, and put one foot on a goat’s back and the other on a cauldron, and if someone had a spear forged over a year during the hours when folk are at Mass – then I might be killed. But how likely is that?’

And Lleu, like a fool, did. And of course, Gronw was waiting with the fatal spear.

Thanks to Gwydion’s spells, Lleu didn’t die, but turned into an eagle, and the magician tracked him down and restored him to human form. He killed Gronw – but Blodeuwedd, not having been born, could not die. So Gwydion cursed her not to show her face by daylight ever again, and changed her into an owl.

‘And the owl is still called Blodeuwedd’, says the tale. If you look at a barn owl’s face, you’ll see the white, heart-shaped ‘blossom’ that led to the association. (Although, my favourite Welsh name for the owl is gwdihw, pronounced ‘goody-hoo’.)

By a weird coincidence, there’s a somewhat similar story in Jewish lore. Tucked away in the rabbinical commentaries is the tale of Adam’s first wife, Lilith. God created Adam and Lilith from dust, in the first creation story in Genesis 5:2. But when Adam tried to lord it over Lilith, and wouldn’t be swayed by her protests of their elemental equality, she made herself wings by magic and flew away from him. God took Adam’s rib to make him a hopefully more subservient spouse, and you probably know the rest.

A woman created for a particular man, rebelling against that role. And Lilith was also associated with the screech-owl. Sound familiar?

There are stories like this scattered through the world’s mythology. Perhaps the one most depicted in the West is that of Pygmalion. He was a sculptor, a lonely guy, who made himself a life-size ivory figure of a woman, and fell in love with it. When he prayed to Aphrodite, the goddess of love, she took pity on him and brought the statue to life. She loved Pygmalion on sight – and they all lived happily ever after…

Or did they? In modern versions, the statue-lady is called Galatea. But that name wasn’t given to her till the eighteenth century. In Ovid’s Metamorphoses, where he first tells the story, she didn’t have a name.

Pygmalion is also the name of a popular play of 1913 by George Bernard Shaw, about a professor of linguistics who, for a bet, takes in a Cockney flower-seller and tries, by training her in speech and manners, to turn her into a ‘duchess’. He succeeds, to a certain extent – but his arrogance leads to her turning her back on him. (Shaw fought hard to avoid his ending being rewritten to give Eliza Doolittle a ‘happy ending’ with Professor Higgins – which is implied in the later musical adaptation, My Fair Lady.)

This trope, of women being created ‘for’ men – literally, or by some kind of transformation – is worryingly common, even today. Look (or, no, really, don’t, you won’t enjoy it) at the ‘incel’ culture on the web, where men with abhorrent views and personalities blame feminism for their lack of success with women, and long for the future time when every man will be allocated his own ‘sex robot’. Look at the plethora of ‘makeover’ shows on TV, especially the ghastly, thankfully short-lived, The Swan. Yes, women collude with the notion that they need to be totally changed into someone else’s image to be fulfilled, but it’s an image created by and for men.

This isn’t exclusive to women, though. It happens to anyone in an unequal relationship. Children and parents are in perhaps the most unequal relationship of all, and kids find themselves subjected to this all the time. (Coincidentally, the idea of a newborn child as a ‘blank slate’, on which parents could write whatever they wanted in terms of a future personality, was coined by the philosopher Rousseau…who happens to also be the one who gave Pygmalion’s statue-bride the name Galatea.)

But society as a whole does this to all of us. Police states do it by brutality and brainwashing, but nominally more ‘free’ societies do it in other ways. The U.K. government has just announced plans to cut funding to college arts courses by 50% – a clear message of ‘We don’t want you to be creative, we want you to be useful’. Money talks, and its voice is loud on every TV ad, as it was in the notorious movie, They Live!: Consume. Reproduce. Don’t Think.

The old nursery rhyme asked: What are little girls made of? Sugar and spice and all things nice, it replied. And boys, in turn, were made of snips and snails and puppy-dog tails. Yeah, but we’re not. We, all of us – boys, girls, and everyone in between, as the lovely Amy Lamé says – are made of flesh and blood, heart and guts and tears and breath, stories and memories and hopes and dreams.

Me, I’m made of mostly bits and pieces and scraps I picked up – cobbled together, but it works. There’s some carrion in there, and some Shiny Things, and a lot of words, and maybe even some flowers on occasion. There’s darkness and light and rainbow colours.

You might like to ponder what you’re made of – self-made, as are we all, beyond what other people think they can make us into. Complicated. And beautiful. And if they try to make us something we’re not, we have options. To step off the pedestal. To not get Henry Higgins his damn slippers. To fly. And to bloom.