Today is June 13th, which in ancient Greece was the festival of the Muses. Appropriately enough, it’s also the birthday of the poet, WIlliam Butler Yeats. 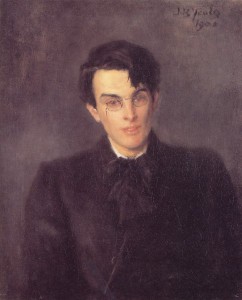 This Magpie has been an aficionado of Yeats since I first found a volume of his collected poems in my school library. He had a fascinating life: born in Ireland, living in England for some years, caught up in the tumultuous events of the birth of the Irish nation (in large part thanks to his long years of unrequited passion for the darling of the revolutionary movement, Maud Gonne), a linchpin of the Celtic Revival movement, and the co-founder of Dublin’s Abbey Theatre. While best known as a poet, he also wrote many plays, some of them combining ancient Irish folklore and his own mysticism with elements of Japanese Noh theatre, which he developed a fascination for; he collected and retold Irish folktales along with his long-time friend and patron, Lady Augusta Gregory. He was also a member of the Golden Dawn ritual magical order, under the title Frater D.E.D.I. – Deus Est Diabolus Inversus, ‘God is the Devil reversed’ – and knew, and was often at loggerheads with, the notorious Aleister Crowley. He wrote a book, A Vision, outlining a unique theory of history and spiritual revelation, based on channeling sessions with his wife, Georgie. Oh, and to top that off, in his later years he was a Senator in the Irish Parliament, and he won a Nobel Prize for literature.

(This is probably a good moment to mention that as a teenager, I had a massive crush on him. Hey, it’s better than my other dead poet crush of the time, Lord Byron…)

Naming my favourite Yeats poem is near impossible; there are just so many. But one that caught my eye back then, is the one I decided to treat appropriately and actually embroider…. 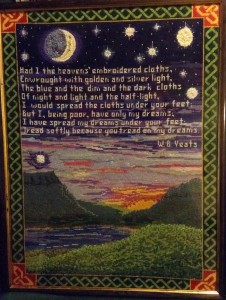 A lot of Yeats’ poems feature imagery of embroidery, something I like to think may be down to his sisters, Lolly and Lily, and their involvement with the Arts and Crafts movement; there was a lot of needlepoint going on in the Yeats household (as well as painting; both his father and brother Jack were celebrated artists). The landscape below the poem here is of Ben Bulben, the mountain in Co. Sligo, Yeats’ mother’s ancestral home, which is the subject of one of his last poems, and under which he’s buried in the churchyard at Drumcliff. I’ve never been there, but it’s on my bucket list.

The dreams of Aedh, the archetypal speaker of the poem (really Yeats himself) are to do with the love of a lady. One gets the feeling that like Yeats himself, he’s going to get hurt, no matter how lightly the lady treads. (Maud rather strung Yeats along for many years, entering into a ‘sacred marriage’ with him which may or may not have involved sex, and finally letting him propose, rather creepily, to her teenage daughter – who also turned him down.) But there are other ways to trample on someone’s dreams, and they may be harsher and more blatant.

Not everyone appreciates embroidery. For part of the time I was stitching this – it took literally years, thanks to the procrastination we know and love – I was at art college. My tutor at the time was an odious little man who took an instant dislike to me. (I later found out, from a friend who’d known him at another college a few years previously, that there, they called him ‘Tripod’ because of his habit of sleeping with students. He wasn’t good-looking and had no other endearing personal qualities, so I can only conclude it was some sort of racket by which only the girls he deemed hot enough to approach could get decent marks from him.)

When, like an idiot, I brought this piece in to show him, at the time when I was putting my portfolio together, his response was a sneering: ‘Oh, yes, very nice. It’ll get you into the Women’s Institute, but it won’t get you onto a degree course.’

Yesterday, there was discussion on the radio of whether or not enough support is given to British university students with mental health issues. Back then, there was no such support – or if there was, I didn’t know about it. I was away from home for the first time, confused about how I was supposed to be deciding which degree to go on to (and not getting any help with that either), and my parents were fighting tooth and nail for me to give up this art nonsense and get a ‘proper’ job. Added to which, I was desperate to be in a relationship and, socially awkward as I was, failing miserably on that front.

I won’t say Tripod’s comment was the straw that broke the camel’s back…but it definitely didn’t do anything to give me any more confidence. Come the interviews I was due for, I couldn’t face getting out of bed. My parents, pretending not to be delighted, came to the college to argue with the head of Foundation that no, I really shouldn’t be ‘forced’ to complete the course.

The creative urge, especially in its first faint sparkings, is a fragile thing. It’s hard to kill completely; but it can too easily be crushed and stunted. I’ve lost count of the people I’ve met who were told as kids that they ‘couldn’t’ draw, paint, sing, dance, write, act…whatever, and who went through life hiding their supposedly mediocre abilities. Often, they’re actually very talented people, whose only crime was being made to sing in a key that didn’t suit their vocal range, being forced to work in paint when their skills were in fabric, dancing with a body that didn’t fit the classical appearance, or presenting their work to someone whose prejudices or jealousies or commercial interests made them oblivious to its value.

This is one reason why I don’t watch that bane of television these days, the talent show. They’re not your mother’s Opportunity Knocks (gosh, is anyone else old enough to remember that?) any more. There’s an awful relish in the way the contestants, especially the ones in the early stages, get picked to pieces.

A fringe director I knew used to tell the actors she yelled at – some of them tiny little children – that ‘This is how the world of theatre works – get used to it!’ It might work that way, but why the hell should it have to? We also tell kids they need to ‘toughen up’ to endure bullying, when what we should really be doing is creating a world in which they don’t have to be ‘tough’ in that way.

Do I think everyone’s brilliant at everything? Not by any means. But people can be taught to improve at whatever they’ve set their mind to do, without beating them down so hard they’ll never be able to drag themselves up again. Good teachers know how to do this. And just plain creating for the love of it shouldn’t be knocked. (Yeats himself used to hold salons where he chanted his poems to the music of a dulcimer, despite being notoriously tone-deaf.)
And while I don’t believe in hell, if such a destination existed, I think there’d be a special place in it for those who sneer at such efforts.

Of course, we can also be our own worst critics. So check if you haven’t been trampling any of your own creative dreams underfoot…and tread carefully.