Today, November 28th, is the birthday of one of England’s greatest poets and artists: William Blake. Most people know him best from the hymn, ‘Jerusalem’, quoted above; those lyrics are from the introduction to his great epic poem, Milton, and were first set to Hubert Parry’s rousing tune (beloved of groups as disparate as the England rugby team and the Women’s Institute) during the First World War.

Yet many people don’t know very much about him beyond that – and would probably be a bit shocked if they did. This is a man who saw angels in trees, spoke over the dinner table with Elijah and Moses, and once, famously, painted the Ghost of a Flea from life – but also a technical genius who came up with an engraving style that has taken modern printers years to imitate. Who wrote sweet little rhymes for children….that protested about subjects like religious and sexual oppression, slavery, child labour, and money-lending scams by the rich benefactors of charity schools. Who died in obscure poverty, but who later became a hero to WB Yeats, Benjamin Britten, Philip Pullman and Kate Tempest. 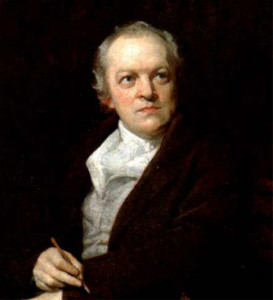 Who was this William Blake, then? He was born in 1757, in what’s still the textile district of Soho, London, to a father who sold stockings for a living. He was an unusual kid, running screaming to his mother at the age of four when he saw God poke his head in at the window, and he carried on seeing visions all his life. Early commenters believed he was actually mad, but it’s been suggested that Blake was gifted with a neurological quirk called ‘eidetic vision’: the ability to ‘see’ the things you imagine, not inside your head as most of us do, but ‘out there’ in the real world, as solid objects.

And to those who would call his visions ‘just imagination’, Blake would have retorted indignantly that you could leave out the ‘just’. Raised in a dissenting Christian family, but also steeped in the mysticism of the followers of the visionary writer Emanuel Swedenborg, Blake believed passionately that the imagination was the spiritual world, that what we call the ‘real’ world was just an extension of it, and that far from being a vague, misty otherworld, it was precisely organised.

Perhaps part of that insistence came from the way he trained his artistic skills: apprenticed to the engraver James Basire, he was sent to sketch the Gothic tombs of Westminster Abbey, where he developed the sinuous, flowing linear style of drawing human figures that makes his work so distinctive. He went on to study at the Royal Academy, but he hated the style it espoused.

Blake didn’t want to paint naturalistic scenes. His favourite subjects were on a mythic scale: the Bible, Milton’s Paradise Lost, and Dante (he was working on illustrations for the Divine Comedy literally up until the day he died). But he also created his own universe of mythology, penning vast epic poems where titanic figures act out cosmic dramas.

One of Blake’s most famous images is the one generally titled The Ancient of Days: 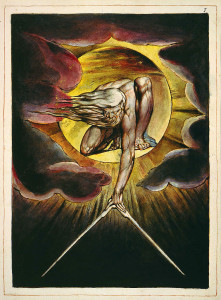 Most people think this shows the Judaeo-Christian God, in his archetypal ‘old man with a beard’ form, creating the universe (there’s a line in Paradise Lost about God using a golden compass, which is where Philip Pullman took the term from). But this isn’t your mama’s Father Almighty. Blake viewed the universe in a Gnostic sense, where creation meant binding Spirit into the confines of the material – and into all the rules and restrictions of human society. In his own myths, the figure who does this is called Urizen – a combination, perhaps, of ‘horizon’ and ‘your reason’. Blake also referred to him as ‘Old Nobodaddy’. He’s the arch-enemy of the fiery spirit, Los, who embodies the creative impulse that won’t be bound by any law.

If Los sounds a wee bit devilish, that’s no accident. Blake admiringly wrote that Milton, who made Satan such an anti-hero, was ‘of the Devil’s party without knowing it’ – and devils, in Blake’s cosmos, aren’t necessarily the bad guys. In his short work, The Marriage of Heaven and Hell, it’s devils who are the creative spirits, and infernal fire the creative energy – identified with the acid Blake used to etch his own poems and illustrations onto copper plates. The angels, by contrast, are rather stuffy and set on following rules.

Blake galled at rules of all kinds. When he was staying in Felpham, Sussex, he nearly came a cropper for cursing the King at a drunken soldier who accosted him in the street. While he was devoted to his wife, Catherine, he was also the first to use the term ‘free love’ in print, and at one stage, following Swedenborgian ideas, suggested that they took in a concubine! He was a friend of the father of the French and American revolutions, Thomas Paine, famously telling him he’d die if he didn’t leave England immediately (Paine was later sentenced to death in his absence, and never returned).

And here are some quotes that give a flavour of his radical viewpoint:

Prisons are built with stones of Law; Brothels with bricks of Religion.

One Law for the Lion and Ox is Oppression.

The tigers of wrath are wiser than the horses of of instruction.

Pity would be no more
If we did not make somebody poor,
And Mercy no more would be
If all were as happy as we.

Paine, in his infamous pamphlet, The Age of Reason, expressed views on the corruption of organised religion that Blake would have agreed with. Yet Blake fought all his life against the impulse of the eighteenth century that the phrase ‘Age of Reason’ has come to embody: the urge to reduce the world to its component parts and processes, devoid of spirit. He used (perhaps unjustly) Sir Isaac Newton as the embodiment of that blind rationality; he depicted him – as a heroic youth, not the bewigged gentleman of our old banknotes – sitting in an oceanic gloom, drawing out his formulae with, again, a compass.

The ‘dark Satanic mills’ of those famous verses may refer to an actual flour mill near Blake’s home in Lambeth, which burned down (possibly by arson, given that a lot of small mill-owners in the district disliked its presence) in 1791. But it may, just as likely, refer to the philosophies that reduced the whole universe to just a complex machine. Or to the universities of Oxford and Cambridge, where those ideas were taught. Or, indeed, to the crushing authority of the orthodox churches.

He had to wait a long time, but the twentieth century finally acknowledged Blake as the genius he was. And were he around today, I don’t doubt he’d have a lot to say about Donald Trump and Richard Dawkins, the rise of fundamentalism, the Me Too movement, Amazon warehouses, food banks and Universal Credit.  Oh, wait… 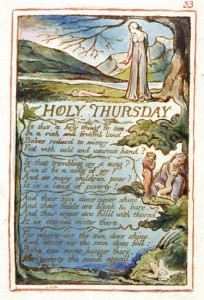 But the most important thing he has to teach us, still, perhaps, is about the vital power of the human imagination to go beyond the boundaries drawn by Old Nobodaddy and all his followers.

There is so, so much more to Blake. Find his poems and read them. Check out his art online – or go to Tate Britain; his exquisite little ‘illuminated books’ have to be seen to be appreciated. Visit his grave in Bunhill Fields in London, which since last August has finally had a proper tombstone.

And as for ‘Jerusalem’…it doesn’t really work when it’s bellowed out by the audience at the Last Night of the Proms, because it’s not about that kind of jingoism. It despairs of an England that uses the old legend of the young Jesus visiting England with his uncle – which Blake actually did believe to be true – to bolster an idea of itself as ‘special’ and destined to conquer its earthly enemies.

But maybe, just maybe, it points to another Jerusalem – the ‘Emanation of the Giant Albion’. The living spirit of freedom, beyond the flag-waving. Something in all of us. And that hope, nobody sums up like Billy Bragg: