This weekend saw us celebrating Mothers’ Day in the UK. The Magpie hasn’t raised any fledglings of her own, and my mother passed over some years ago, so this was mainly an occasion for spoiling my mother-in-law (who’s a sweetie). But it’s not a bad time to look beyond the flowers, chocolates and cards with cute kittens on them. Because motherhood is a lot more complicated and messy than that.

While the US has its own version of this festival later in the year, ours is much older, and didn’t originally have its modern connotations. Mothering Sunday was, in Christian tradition, when you went to visit your ‘mother’ church, the one you were baptised at. While you were there, it was logical that since you didn’t get much time off work, you’d pop in on the woman who actually gave birth to you, if she was still around. It became traditional to take her a posy of flowers, or a cake – the Simnel cake, topped with marzipan and often eaten at Easter a few weeks later, became associated with Mothering Sunday in England. The greeting card industry didn’t get in on the act till a lot later, but here we are now, with floral sausage dog baskets and pink spa products coming out of our collective ears.

‘Mother Church’ – more often for Catholics, the organisation itself – is only one way motherhood has been used as a symbol. A Mother Superior heads a convent; a matron (from the Latin mater, mother) oversees (or used to) a hospital ward. Your Alma Mater, ‘dear mother’, is the school or university you attended (if it was a posh one). Your motherland is where you were born; your mother tongue is your native language. In biology, a mother cell splits to produce daughters; a mother culture is used to brew fermented products like kefir. Metals come from a mother lode, and precious stones are embedded in a matrix of base rock. Ideas of origin, containment and nurturing authority are all summed up in this way.

Human motherhood is often lauded as the pinnacle of relationships. After all, you can’t get more intimate than having literally grown inside someone. As mammals, and as primates, an intense physical and emotional mother-child bond was what enabled us to survive. We’re told that mother-love is pure, unconditional. We talk about a ‘face only a mother could love’. Our culture used to deify maternity in the form of Mary, the immaculate and ever-loving Mother of Jesus and by extension, of all believers. These days, we more often see perfect mother-and-baby shots in celebrity magazines: the babies contentedly snoozing, the mothers perfectly coiffed and beaming, the surroundings invariably spotless. You almost expect to see cherubs fluttering around with swags of flowers.

There are two snags to this idyllic picture, though. One is that motherhood is, as I’ve observed from watching many of the women I’ve known go through it, damned hard. Neither statues of the Blessed Virgin nor celeb photo shoots give any indication of stretch marks, vomiting, the literal bloody mess of childbirth itself, pacing up and down at 2 am desperately longing for sleep, screaming meltdowns in supermarkets, homework, puberty…and that’s in the best case scenario, assuming no complications like divorce or disability or extreme poverty or any of the other random shit life can throw at us.

And yet, she persisted…and the human race goes on. But painting a pretty, idealised picture of motherhood makes light of just what hard work it is.

And from the other side, idealising mothers themselves isn’t great either. It’s rightly been argued that we shouldn’t expect anyone to be a ‘perfect’ mother – such a thing does not exist, and couldn’t – but being a ‘good enough’ mother is a worthy goal. What does that mean? Hard to define, but if your kid has reached adulthood passably happy and reasonably healthy, is doing something good for society, and hasn’t taken up serial killing or eaten Tide pods, you probably did OK.

But there are mothers who fall short of ‘good enough’. The obvious ones, who beat their kids to a pulp, or look the other way when their partners abuse them, or scream at them non-stop. And the less obvious, who manipulate the child, who see them as a status symbol, or a carer, or a fan club, or a sticking-plaster for a bad relationship, or a burden, or…anything, really, except a small human being who’s utterly dependent on them for love and support. We don’t like to accept that there are mothers like this – so, every Mothers’ Day, we sweep them under the carpet and keep up the ideal. We forget that that maternal word matrix is also the name for a series of movies in which people were deceived into thinking their world was real. And that many mammals eat thir own young. 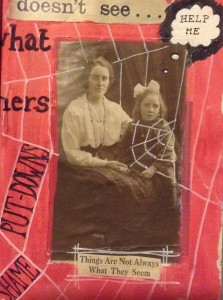 So, this day leaves out a lot of people. Kids, who were abused, who grew up in the dubiously named ‘care’ system, whose mothers died, or left, or were mentally ill, or addicted, or just assholes. Who were adopted, or raised by their grans or aunts or older siblings, or by their dad, on his own. And mothers, or not-mothers: those who couldn’t conceive, whose longed-for babies died in the womb, or were stillborn, who terminated pregnancies for whatever reason, who were forced to give babies up for adoption. Or whose versions of motherhood don’t fit society’s template: the woman who chooses to have a child by donor and raise them alone, the lesbian mums, the trans mum, the woman who chooses to be a surrogate. Not to mention women who consciously decide that having children just isn’t for them, thanks.

Paganism often sees the Goddess as having three aspects: Maiden, Mother and Crone. Letting aside that Goddesses, and women, have many more aspects than that, it’s perhaps significant that we don’t have the equivalent of a Maidens’ Day or a Crones’ Day anywhere in the calendar. Our culture loves young women as long as they’re cute and don’t act too liberated, and it fears and loathes powerful older women. In between, however, the only real role it has for us is the nurturing role, and heaven help us if we step outside that stereotype. They hate it when mothers get uppity and start asking for things like rights. But that, as anyone who knows anything about mammals knows, is part of the deal of motherhood: fighting like hell against anyone who wants to harm your cubs, whether that’s big business or rape culture. There have been more and more women on the recent protest marches toting babies or with kids in tow. They know it’s the future they’re marching for.

On the other side, what of those of us for whom the slew of cards praising those loving mothers we didn’t have, leaves a bad taste in our mouths? There are ways to cope. A counsellor said to me, a few years back: ‘You have to be your own best mother now.’ That’s sensible advice for anyone who feels the lack of good mothering.

So how do you mother yourself? You look at what good mothering involves, and do that for yourself.

Nurturing: Babies have to be selfish or they’d never survive, and a good mother knows she has to drop everything and attend to that wailing bundle. While our adult needs aren’t quite so urgent, they can be equally basic. Have you been eating regularly, something other than takeaways? Are you getting enough sleep? Staying hydrated? Taking any meds you need to take? Gently make sure you’re looking after those things before you attend to anyone else. (This also applies if you have kids of your own, on the oxygen mask principle: if you look after yourself, you’re more able to look after them.)

Protecting: Here’s the mother-bear stuff. You need and deserve boundaries. Good mums make sure let their kids don’t run out into the road; you, as an adult, can make sure you don’t do things that have a greater than average chance of actually harming you (and as an adult, you may be a better judge of what those things are). Where you can, learn to say no to the things (and people) you know aren’t good for you.

Loving: Do you actually love yourself? Many of us don’t show it often enough. Do mirror work – actually look into your own eyes in a mirror and tell yourself those loving things you want to hear. This takes practice; don’t be surprised if you laugh, or cry, when you first do this. It’s powerful stuff. It takes some of us a very long time to learn that we’re worthy of love; use any therapy or self-help techniques that help you towards this.

You might even consider – whether you normally receive Mothers’ Day cards or not – buying yourself one when it next comes round. Maybe some flowers. Or chocolates. Or whatever tells you that you’re someone special. Because if you’re taking the time, as an adult, to give yourself the mothering you didn’t receive earlier on, then, dammit, you are pretty special. And that’s also something worth celebrating, right?