Symbols are powerful. Anyone who was at the Norwich Pride Parade last weekend – as I was – and witnessed a 50-metre rainbow banner being paraded through the streets, could tell you that. Anyone who’s been at a Trump rally and seen the sea of red baseball hats knows that that power can be used (and misused) in many ways.

But I’m also thinking here of more basic, graphic symbols.  We all use these every day,  You’re using them right now; the Roman alphabet, like its many fellow writing systems, is a series of symbols for vocal sounds, which in themselves are symbols for things or concepts. You use symbols in another form when you express your delight, disgust or disbelief on that Facebook post with an appropriate emoji. If you drive, you use the symbols on road signs to help you stay safe.  And again, there are some simple signs that have an immediate impact and power.  Think of the cross, the Star of David, the CND symbol.

Practitioners of magic, the esoteric art of changing reality, have long used symbols for their own purposes. One thing you can do to express an idea in a concise way is to make a sigil.

If you’ve ever tried to create a monogram, you already know what a sigil is. Basically, it turns a set of ideas, or a sequence of words (like your name), into one concrete, identifiable symbol. In magic, you do this with the letters of a phrase – like ‘find a new car’ or ‘smash the patriarchy’ – that represents your aim; you then remove duplicate letters and condense it down into a doodle-like design that embodies that aim.  You can then use the sigil as a focus for your mental and physical energy to bring it about.  The best known proponent of this method was the celebrated twentieth-century artist and occultist, Austin Osman Spare, but in recent times it’s been enthusiastically taken up and refined by the practitioners of the post-modern, eclectic field known as Chaos Magick.

You don’t have to use the regular alphabet. Prince, while not a magician in quite the usual sense, created a powerful sigil of his own philosophy on life and music in the symbol he used in place of his name.  Back in history, at a time when being able to write at all was esoteric, Norse and Saxon magic-makers combined the angular, incised letters of their own writing system, the runes, to create sigils – known as bindrunes – for various purposes. (In Iceland, where the most direct descendants of the Vikings live, they’re still popular – and still on a rock star theme, one Bjork Gudmundsdottir has a striking tattoo of one, a protective symbol known as the Vegvisir.)

You can also make sigils from basic symbolic shapes, and this is the method used by Laura Tempest Zakroff, a Pagan writer who blogs for the religious site Patheos. Zakroff recently created, with her workshop participants, a series of sigils designated to support the efforts of activists against the current US political regime and its abuses. She’s given permission for these sigils to be shared as widely as possible under a Creative Commons licence, and used in whatever ways anyone sees fit. This is her sigil for building community: 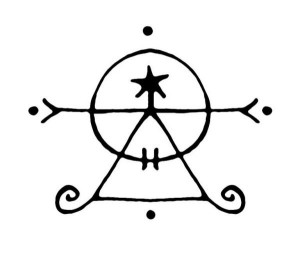 She describes here how it was created, and exactly what the different components mean. There are also links to the other symbols and the story behind the series. (If you can get hold of it, her book on the subject, Sigil Witchery, is well worth a read.)

And here’s a version I copied and filled in with my own doodles and colours. This is one good way to empower a symbol, and it’s the simplest method to try yourself. (If you draw it on a postcard, you can always leave it in a library book or in another public place for someone to pick up.) 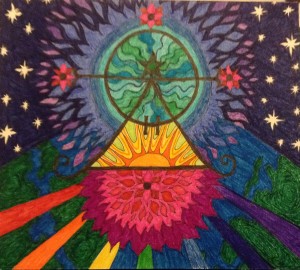 There are lots of other ways to put the energy of a symbol out there. Here are some possibilities…

– Chalk it on a sidewalk or other flat public surface.
– Delineate it on the ground in flower petals (from the local area, and gathered, not plucked), twigs, or wild bird seed.
– If you have access to a garden or plot, sow flower seeds or bulbs in the shape of your symbol.
– Use makeup or body paint to draw it on your skin.
– If you’re near a beach, draw it on the sand and leave it for the waves to wash it away.
– Outline it in tea lights. (Never leave lit flames unattended! This one is more suitable for protests or other events where people will be constantly in attendance.)
– Get people to stand in the shape of the symbol. If you can, photograph this arrangement from a high vantage point and share it on social media.
– Cook food in the shape of the symbol – maybe ice it onto a cake or cookies. Then share it around so the energy can be consumed.

You can probably think of your own ideas.  Stay within the law, don’t harm the environment, but apart from that, use your imagination.   Because changing times demand new symbols, and new ways of expressing them.