The Magpie is back! With a nice little historical mystery for the darkening time of the year.

Mr. Magpie and myself recently spent a week in Edinburgh. He has family up that way, and after going there for a wedding in August and having just one day during the first week of the Fringe to look around town (do not try this at home, kids!), we decided to go up for longer, at a somewhat calmer time.

Edinburgh is a city I might like to live in, if circumstances were different. It has all the qualities I like in a city: lots of different levels and fascinating nooks and crannies, a new bit with all the regular chain stores and an older bit with bookstores and vintage clothes and artsy little shops, tons of history and folklore, great public transport, interesting outskirts, easy links to elsewhere, and it’s a stone’s throw from sea, mountains, and some of the most spectacular scenery you could wish for. I could very happily ensconce me and the hubby in one of those fifth-floor flats in Morningside or Stockbridge.

(Disclaimer: This ad was not brought to you by the Tartan, Greyfriars Bobby and Haggis Flavoured Everything Marketing Board. Although there’s that, too.)

One of the fascinating bits of folklore around the city concerns something we saw in the National Museum of Scotland. This place is a treasury of history, natural history and culture from Scotland and elsewhere, including an actual T Rex, the world’s weirdest chiming clock, and the famous Lewis Chessmen. (As well as being a great place to shelter from the rain and get a decent cup of tea.).

But this exhibit is tucked away in an upstairs gallery on the subject of death.  Among the Victorian mourning cards and the jet jewellery are these wee coffins. 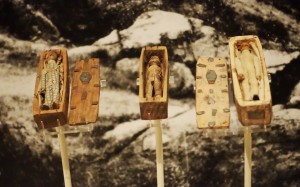 According to written records of the time, seventeen of these things were found in 1836, by a group of young lads playing in the parkland around Arthur’s Seat, the largest of the basalt volcanic plugs that dominate the Edinburgh landscape. A boy found a cubbyhole protected by sheets of slate, lifted them aside and found rows of miniature coffins, each complete with a tiny carved corpse-doll in carefully stitched clothes.

The coffins changed hands through several private collectors before some of them made their way to the Museum. But mystery has always surrounded who put them there and what they were for.

First, and perhaps obviously, were they an act of black magic? Scotland has a sorry history of trying and burning ‘witches’, some of whom may have practised forms of folk magic. The fires were thankfully out by the 1800s, but the magic was still alive and well. And placing an effigy of someone you didn’t like in a coffin, and ‘entombing’ them, might be seen as a way of hastening their death – much the way medieval ill-wishers might have paid a priest to say a Requiem Mass for someone who wasn’t dead…yet.

Then there’s the shape and posture of some of the figures, suggesting they were repurposed from wooden soldiers. A kid’s imagination in creating an honourable burial for their toys, after long and faithful service? But that doesn’t explain the clothing, clearly made by someone who had sewing skills beyond a child’s.

One intriguing explanation attributes the figures to textile workers who were involved in strike action in Edinburgh in 1820, some of whom were punished by being made to build a road round Arthur’s Seat. A tribute to their fallen comrades by those forced labourers – or perhaps, a curse on their oppressors?

But the most popular theory concerns a famous macabre episode in Scots medical history. Edinburgh has always been a place where would-be doctors go to be educated. These days, the cadavers students dissect to teach them anatomy are left posthumously by willing donors. Back in 1828, they could only legally use the bodies of executed criminals, suicides, and paupers – but supplies were never enough, and there was a roaring trade in digging up respectable townsfolk from fresh graves. Enter William Burke and William Hare, who took to actually killing people for the anatomy theatre. They were eventually caught, and Burke was hanged and ended up on the slab himself; Hare escaped, and his fate is unknown.

Maybe, it’s been proposed, someone felt sympathy for the poor souls – literally, they were some of the poorest and most vulnerable people in the massive, miserable slum that was the Grassmarket area at the time – who’d been deprived of a proper Christian burial, and decided that burying these dolls was a fitting substitute. There’s just one problem: Burke and Hare’s tally of victims only made it to sixteen. (Unless someone suspected there were more?)

Regardless of the truth, there’s something about this idea of a substitute burial that appeals to me. Even without foul play, there are often times when people die in such a way that the usual closure of a funeral isn’t possible. 9/11 springs to mind, or some of the worse plane crashes, or natural disasters – tsunamis or floods – where a body may never be found. There may also be instances when someone once close to us dies in a less traumatic way, but time, distance, personal circumstances or family rifts prevent us paying tribute as we’d wish to.

Why not, then, follow the lead of whoever created those tiny coffins? At this time of year when the imagery of death is all around us, it’s pretty easy to find little papier-mâché coffins for Halloween crafting. A little ingenuity with fabric and wood – or clay, or whatever (preferably biodegradable) material you find easiest to work with – can produce a symbolic replica of anyone you want to commemorate.

And then, it’s up to you. You could have prayers or music, or you could just go out and dig a small hole in a quiet place. Under a tree, perhaps. Or out on a hill, like the unknown maker did on Arthur’s Seat. Because even the lost and forgotten deserve to be remembered, somehow.