Grayson Perry is a national treasure, and one of my favourite artists. From his initial winning of the Turner Prize back in 2003, he’s continued to be use and delight the art world with his classically shaped and glazed pots layered with images of modern life and pop culture; his branching out into tapestries depicting a contemporary Rake’s Progress of status and class; his fetishisation of his muse and travelling companion, his childhood teddy-bear Alan Measles; and (most enjoyably enraging to Daily Mail readers and their ilk) his sporting of a blonde bob and embroidered frocks as his female alter ego, Claire.

Recently, Grayson has been exploring a perennial fascination of his, the human need for rituals, in a series of programmes for Channel Four. The series ended last week, but you can still view it here. In the episodes, he looks at four of the most basic of rites of passage in human life – birth, coming of age, marriage and death.

First, he witnesses traditional examples of how those passages are handled in various cultures, from a raucous and rude puberty rite in an Amazon village, to a meticulously choreographed Shinto wedding. Then, he gets together with people in secular England facing those transitions, but in ways that are less than traditional: families with premature babies spending time in an NICU, a man with motor neurone disease contemplating ending his own life, a couple divorcing, an Alcoholics Anonymous circle finally facing sober adulthood. For each, he finds out what those transitions mean to them emotionally, helps to organise a ceremony that embodies those feelings, and creates a piece of art (mostly ceramic, since that’s his area) that’s incorporated into the ritual and serves as a lasting memento of the occasion. The process is fascinating, and some of the resulting rituals are deeply moving.

Ritual is one of my obsessions, too, and watching this started me thinking about how we could more widely apply the sort of method he uses.

Think about what rituals we actually have in our culture, if we’re not of any particular religious background. Before a birth, we have baby showers (which, OK, are a US thing, but they do seem to be catching on this side of the pond). After the baby’s born, we have, or used to have, a christening – or baptism – which was often treated as an excuse to ‘wet the baby’s head’ in quite another sense. Then, a ‘coming of age’ party when you reach eighteen or twenty-one (or fifteen, if you’re a Hispanic American and the Quinceañera is part of your cultural background). If you meet the right person, you might get married: in church, or in a secular venue. You and your partner might have parties to celebrate numerically significant wedding anniversaries. There’ll be another party when you retire. And then, at some point, a funeral. And between all these, there’s the annual ritual of birthdays.

Weddings – with tweaks to the law – are slowly becoming less stereotyped and more individual and meaningful to the couple than they maybe used to be. And of course, the opening of marriage to same-sex couples means the ritual has had to adjust itself. This is a good thing. Rituals that no longer mean anything to the people involved are pointless.

Funerals are going the same way; I’ve been to several Humanist funerals, and the freedom from religious strictures led to much more personal ceremonies. Baby namings are probably doing likewise, but I haven’t been to many in recent years. But coming of age still has little real acknowledgement (aside from your teenagers going out and ‘proving’ themselves by doing things you really would rather they didn’t do). Neither does ageing, birthday card jokes about wrinkles aside.

(We also have some new rituals appearing in our culture that we’d maybe be better off not celebrating. I’m thinking of things like purity balls in the conservative parts of the US. Or gender reveal parties, which not only help enforce the pink-blue, boy-girl stereotype of expectations before the poor fetus is even decanted, but lead to baked monstrosities like these. Rituals that enforce an agenda, be that of commerce, patriarchy or fundamentalism, are perhaps worse than those that no longer mean anything at all.)

But there’s also the first time you fall in love…or get dumped. For LGBT people, coming out and/or transition. Leaving home (a bigger, and later, deal for today’s young people). Not unusually these days, coming back home, and establishing a new relationship with your parents. Losses: redundancy, divorce, losing body parts to surgery, the loss of a wanted pregnancy. The choice not to bear children, right now or ever, by abortion or sterilisation. The decision to bear them by alternative means, by IVF or surrogacy or adoption. There’s a long list of life passages we don’t officially mark.

During a conversation about this subject on Facebook, I was reminded that it’s mainstream culture – meaning, largely, WASP culture – that doesn’t celebrate these things. Various Native American peoples have for centuries had ceremonies to celebrate ‘two-spirit’ people, to mourn the death of a little one lost before birth, or to honour elders – for example. Many non-Western cultures have rituals for other passages we overlook. We shouldn’t forget that.
But, neither should we be taking their rituals – which are theirs, and only really make sense within the context of the culture that created them.

Rituals – to use an analogy Mr Perry might understand – are containers for the emotional impact of the crucial points in our lives. If we steal other people’s pots, that’s colonialism. But what we can and should do, is look at their underlying form for inspiration, then take the raw clay of our own lives, and shape it into something that will hold our particular experience. 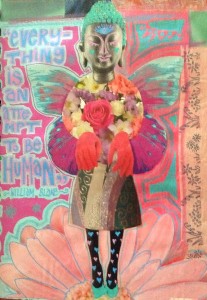 Try it yourself. Look at whether there’s any unfinished business around a transition in your life, past or present (because just as it’s never too late to have a happy childhood, as the AA folks showed, neither is it ever too late to celebrate your maturity – or anything else). Look at how that, or something like it, has been dealt with by other humans.

Then, working on that structure, ask yourself what you can make of it. Literally. We’re symbolic creatures, and we need to get our ‘stuff’ out – in the form of visible actions, or tangible objects – to deal with it properly. Ritual comes, as Grayson says, out of our bodies and emotions; it’s something we’ve been doing for a very long time. Let’s take it into our own hands and make it meaningful for us, today.