It’s been too long, I know. As is common in winter, I’ve been struggling with the Black Dog again. A raise of my medication dose, plus a bit of CBT and a lot of TLC, seems to be doing the trick, so bear with me.

We’re not long past Valentine’s, and rather than look at the overpriced, clichéd array of chocolate (not that there’s anything wrong with the substance itself), flowers, booze, cuddly animals and other tat that’s supposed to make out that a romantic partner Really Loves You, I want to talk about another kind of love. An everyday kind, that undoubtedly plays a greater part in many marriages than the slushy stuff, but which can also be applied to family, friend, workmates, pets and even total strangers.

Among the authors whose books have been helping me in my hour of need is one Susan Calman. You may know her from her standup shows, from various comedy panel shows on radio and TV, or from her participation in Strictly Come Dancing (a show I rarely watch, and then only for the costumes, but whatever floats your boat). She’s a very funny lady, an advocate for mental health and LGBTQ rights, and the author of Cheer Up, Love and Sunny Side Up.

While the former book, on the subject of depression and how to deal with it, was immensely helpful (and gave me a good few giggles along the way), it’s the latter I want to talk about here, because that one is about things we often neglect, but which are so, so important in our lives: joy, and the art of bringing a little of it to other people by being kind.

Kindness has become something of an overlooked virtue in recent years. Our culture seems to have raised unkindness, meanness, nastiness, to a fine art. Mr. Magpie blames the Internet, where it is indeed much easier than it used to be to make total strangers feel awful about themselves and life, should you want to do that. But I don’t think it’s the full story. Rather, the past twenty years or so have seen a rise in a more general meanness.

British readers of a certain vintage may remember a TV quiz show called The Weakest Link. Where older quiz shows had involved contestants straightforwardly competing against each other, alone or in couples or teams, this show had a new twist: everyone answered questions to win money that went into a shared prize fund, but at the end of each round, everyone voted off whoever they thought had been the worst at answering said questions – hence the title.

But it was also presented by the acidic Anne Robinson, whose spiel with each contestant would focus on their supposed shortcomings – not just on the actual questions, but on the information she’d been given about their backgrounds and hobbies (heaven help you if you admitted to a musical bent, because you’d then be asked to sing, to Robinson’s icy glare), and on their appearance. If you were wearing anything striking, if you had unusual hair on your head or face, or especially, if you were fat (Robinson once admitted in an interview that she wanted to be remembered for ‘being a size 8’)…there would be no mercy.

(It speaks volumes about my late mother that she loved this show, applauded Robinson for her ‘honesty’, and was forever urging me to apply to be a contestant. No, thank you very much.)

It wasn’t the first TV show based on humiliating people, by any means. But I think of it as when the rot set in. ‘Reality TV’ since then seems to have particularly focused on making people do things that set them up for mockery and derision, or on the lives of people already in ‘othered’ groups, whether that’s unemployed people on benefits, fat people, people with facial disfigurements, Travellers, or people with OCD or hoarding disorders (assumed, it seems, by some producers, not to be complex mental illnesses so much as opposite attitudes to housecleaning).

It’s not OK. And it’s not OK that it being not OK now needs to be explicitly stated. And sadly, such encouragement to mock seems to have rubbed off on the real world.

I like to think humans are better than this. So I welcome Calman’s book, and the tour that precipitated it, in urging people to use a little more kindness in their lives. And I’d like to urge anyone reading this to do the same. Heaven knows, in the current climate, we could do with a bit of simple humanity.

Here are some routes to look at:

Common courtesy. ‘Etiquette’ and ‘politeness’ sound a bit cold, but what I mean here is, basically, the art of being considerate to other people. Open the door for that person struggling with a pile of parcels. Heck, offer to carry a few of them. Help a harassed parent up or down stairs with a baby stroller. Say ‘thank you’ to the customer service person who helps you out with your broadband subscription (theirs must be one of the most thankless jobs).

Compliments. Most of us don’t get enough of them, and they can sometimes be backhanded or misguided (comments on someone’s actual body are fraught). So we need more of the no-strings-attached type. Stick to chosen traits of appearance or style: tell someone their hair looks awesome (people with funky coloured hair always seem to be delighted to hear this), or that their shoes are cute. Or point out skills: that you love their singing, or that they have an admirable way with houseplants, or that they did a great job on your car or plumbing or manicure. (If you paid them to do whatever it is, tips don’t hurt either.)

‘Thinking of you’ gestures. Especially in situations where people are often forgotten about. Flowers for the person who just lost a much wanted pregnancy. A card for someone who’s had to have their beloved old dog put to sleep. A friendly note to the work colleague who’s off with depression. The greetings industry tends to forget circumstances like these, but we shouldn’t.

Charity. I agree with William Blake that ‘Pity would be no more/If we did not make somebody poor’ – in other words, that much charity is only necessary because we live in a system that neglects, and sometimes deliberately harms, its most vulnerable people. But while we work for change, those people are still out there needing help. Food banks need your contributions, and your volunteering, if you can spare the time. Homeless shelters need help. Your local Big Issue seller (or look up your local equivalent street newspaper) would love you to buy a copy, and would probably be even more pleased if you also bought them a tea or coffee. Check out organisations in your area.

Guerilla tactics. Think anonymous. Things like paying in advance for the coffee of the five next people behind you, or buying a box of doughnuts for everyone on the cleaning roster, or surreptitiously planting daffodil bulbs along a neglected city verge. Or just encouraging messages, maybe in library books, or as Post-it notes on public bathroom mirrors. 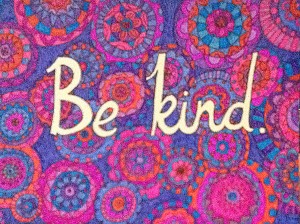 Standing up against the hate. Sit next to that Muslim lady in the headscarf who’s being insulted by some dickhead on public transport. Give someone who’s being trolled online a supportive comment. Clean racist graffiti off a wall. The people suffering from this kind of hate need to know that not everyone approves of it, and that they’re not alone.

It doesn’t necessarily have to be heroic or huge, but sometimes the small things are what count. And maybe, just maybe, a lot of small actions can turn the tide in a big way. I think it’s worth trying.