Fifty years ago this week, the human race did a remarkable thing, something no other species on Earth has done. We managed to send a few of our number across airless, lifeless space to walk on the surface of our nearest neighbour.

There has, naturally, been a lot of Apollo 11-based programming this week. Even the conspiracy theorists, who claim the Moon landings were faked in a studio somewhere, seem to have quietened down for once. Although, even faking such an event would have been a remarkable feat of human creativity back in those pre-CGI days. And as Mr. Magpie pointed out, some have said that Stanley Kubrick, who’s rumoured to have directed the fake footage, was such a perfectionist he’d probably have insisted on actually filming it on the Moon anyway!

Earth’s natural satellite has intrigued humans since we’ve been human. Probably before – the Egyptian god Thoth, who ruled the Moon, was depicted as a baboon because his worshippers had noticed how their local primates responded to a Full Moon by howling, gesticulating and generally appearing to be worshipping the big round silver thing in the sky. The human female menstrual cycle may, in the absence of artificial lighting, have been triggered by exposure to moonlight. Certainly the people who built Stonehenge, and many other prehistoric stone monuments of Europe, arranged them to correspond to the movements of the Sun and the Moon, and probably to festivals on their calendar. The very word ‘Moon’ comes from a root meaning ‘to measure’ – from which we also get words like mensurate, metre, mental, and unsurprisingly, menstruation.

The biological connection has led to the Moon often being viewed as female in cultures worldwide, although there have been plenty of prominent Moon gods – Thoth in Egypt, Sin in Sumeria, Tsukiyomi in Japan, and Mani in Scandinavia, to name a few.  Europeans saw the markings of the craters as a Man in the Moon – sometimes identified as the Biblical first murderer, Cain – but in China, they told a story about a man who discovered the elixir of eternal life, but his wife stole it from him, absconded to the Moon, and because immortals can do what they want, turned herself into a rabbit.  Chang-O, that’s her name, can still be seen on the Full Moon’s disc.  Someone obviously remembered this in 1969, because Houston Control can be heard telling the Apollo astronauts to ‘look out for the rabbit’ as they’re about to touch down.

To the Greeks, the triple Moon goddess, Hecate, was the goddess of witchcraft par excellence – witches, like the Moon’s other acolytes, thieves and lovers, preferring to do their business at night, by her light. And magic and mystery have always been associated with the silver orb, so much so that the Moon became the border between earthly (‘sublunary’) and unearthly things. From the Moon onwards, anything might happen.

The notion of it as a place, apparently so close yet unreachable, played on the human imagination down the centuries. Dante, in his Paradiso, allotted it to nuns who broke their vows (inconstancy, again). In Ludivico Ariosto’s 16th-century epic poem, Orlando Furioso, the knight Astolfo flies to the Moon in a chariot drawn by hippogriffs, to find the valley where all the lost things of the world ended up. And William Blake, in a little book of emblems, made it the epitome of human desire: 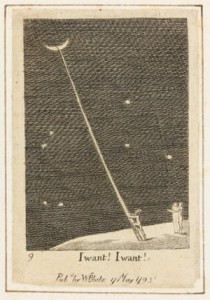 More recently, the Moon has inspired science-fiction writers from Verne to Wells, from Heinlein to Arthur C. Clarke, to imagine their own versions of lunar exploration. When George Méliès made his pioneering 1902 film, Le voyage dans la Lune, he was paving the way for Kubrick’s 2001: A Space Odyssey, of 1968. And there have been more songs written about the Moon than any other heavenly body: musicians have seen it as blue (Billie Holiday), begged to be flown to it (Sinatra), wished to be it (Neko Case), warned of a bad one rising (Creedence Clearwater Revival), walked on it (The Police), and made a whole album about its dark side (Pink Floyd).

Amidst all this poetry and symbolism, it’s easy to forget that there was a very political reason why the US began its lunar programme: it was about beating those damned Russkies. Yup, the Cold War was behind it all, with Yuri Gagarin’s successful orbit of Earth in 1961 putting the wind up the Americans, who couldn’t bear to be outdone by Communists, resulting in JFK’s pledge the following year to put a man on the Moon by the end of the decade. He didn’t live to see it, sadly, but it happened.

It’s become common, in recent years, to hear the cynical complaint: If we can send a man to the Moon, why can’t we (insert solution to the terrestrial problem under discussion)…..?

Maybe what we should be saying is: If we (meaning, here, the human race collectively) can send a man to the Moon…we could do anything.  Anything we really put our mind to. Solve climate change. Cure cancer.  Overthrow injustice. Abolish racism, misogyny, homophobia and all the other hatreds that plague the world and hold us back. If we really, collectively want to.

So let’s keep the poetry and mystery and sheer courageous absurdity of the attempt. Because maybe that’s exactly what the world needs right now, and always: for us to look seemingly impossible things square in the face and say: heck, yeah, let’s do this.

I leave you with one of my favourite pieces of lunar music, and one that refers directly to that reckless daring. Here’s Tasmin Archer.  Go do impossible things…and look out for that bunny rabbit.