It’s what Christians refer to as Holy Week, leading up to the grand climax at Easter. But before that, comes the anticlimax of Good Friday.

In the Christian story of this week, Jesus enters Jerusalem on Palm Sunday. Here, he makes himself unpopular with the authorities, and on Thursday night, after a final celebration of the Jewish Passover feast, he’s betrayed by one of his disciples, arrested, summarily tried – and on Friday, put to death by crucifixion (the Romans’ preferred method for slaves and other people they wanted to publicly humiliate, and a nasty and slow way to die). He’s entombed in a borrowed grave, and left for the Sabbath.

And then he ‘descends into hell’ as the Nicene Creed later put it. Medieval paintings show Christ victorious, wielding a cross banner, entering the dragon-mouth of the underworld to grasp the hand of the naked and bearded Adam, the first man, followed by his wife Eve, the patriarch Abraham, and the rest of the virtuous Old Testament characters. Horned devils look on in outrage. The whole scene, known as the Harrowing of Hell, was essential to medieval mystery plays, with diabolic farting and fireworks adding to the spectacle. 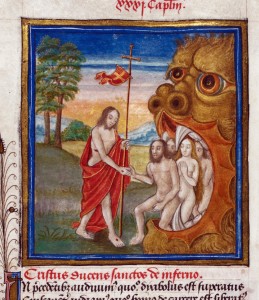 And on Easter Sunday, of course, Jesus rises from the dead, and that’s why we gorge ourselves on chocolate bunnies. Shurely shome mishtake!

Christ is not, as sometimes claimed, a carbon copy of other dying-and-rising gods. That said, there are an awful lot of deities who do die – literally or symbolically – and come back to life in some way. In Egypt, Osiris is killed by his brother Set and chopped into bits, and his widow Isis searches for the pieces and brings him back to life so she can conceive her son Horus. In Greece, when Zeus blasts his lover Semele, he takes his son, the fetal Dionysus, from her ashes and sews him into his thigh so he can be carried to term, resulting in the god being referred to as ‘twice-born’. Persephone is taken captive into the world of the dead, causing winter to descend upon the world until her mother Demeter secures her release. In Sumer, Inanna ventures down to the underworld to see her dark sister, Ereshkigal, and ends up as a corpse hanging on a meat-hook, until she gets her spouse Dumuzi to take her place. In Japan, the sun-goddess Amaterasu retreats into a cave, and the other deities have to lure her out. In Scandinavia, Odin hangs in sacrifice on Yggdrasil, the World Tree, to gain the secrets of the runes.

Christianity has treated these stories as either demonic imitations of its own story, or (as C. S. Lewis did) as divine precursors, to prepare pagans for ‘the real thing’. Carl Jung would say that death and rebirth is an archetype, one of those basic psychic patterns that the human mind keeps dredging up from its depths. It’s embedded in the nature (literally) of the world we live in. The Sun ‘dies’ at night and comes back each morning, the Moon wanes and waxes again, plants die off in the autumn and come back in the spring, many animals hibernate in winter and emerge when the weather gets warmer. So humans assume that the divine powers behind nature do likewise.

What about us? Actual, physical resurrection isn’t going to happen anytime soon for anyone but cryogenic enthusiasts and the most ardent literal Christians. But humans from very early times have believed in smaller rebirths during this life.

Some are voluntary. Joining a religion or group, it’s usual to go through a ‘swearing-in’ ritual. The cults of deities who’d passed through a death and rebirth required initiates to go through an initiation where they, themselves, were ‘reborn’ – these were the mystery religions, some of which flourished at much the same time as early Christianity (which may itself have been more like a mystery cult in its early days; adult baptisms traditionally took place, and sometimes still do, at Easter, with the candidate – from candidus, pure white, the colour of the robes they wore – identifying with the resurrected Christ).

The ordinary, chosen transitions of life – leaving home, starting a new job, marriage, having a child, are all initiations in themselves. But there are other, less voluntary experiences that leave us as different people from who we were before. Puberty, menopause, bereavement, the loss or leaving of a home or job or relationship, serious physical or mental illness, addiction (there’s a reason reaching ‘rock bottom’ is an important turning point), are all passages that are no less momentous. But often, they go unmarked or even unspoken.

There’s huge pressure in our culture to ‘get on with life’ – but paradoxically, unmarked transitions tend to leave us…well, stuck. And stuck halfway down the birth canal is, as any obstetrician will tell you, not a good place to be.

The artist Alex Grey, and the gender rebel Kate Bornstein, as I mentioned in an older post, have both suggested that maybe the notorious suicide rate among creative people has to do with this. Artists have a need to regularly re-create themselves, to ‘die’ and rise from their own ashes in a new form; unable to find ways to do this psychologically, some, tragically, kill themselves physically. We obviously need a better way.

Traditional initiations – for religious groups or life passages – were usually dramatic, incorporating imagery of actual death and birth. Physical pain and ordeals, sometimes enhanced with psychotropic drugs. Darkness and confinement – spending time alone, maybe bound or blindfolded, or in a hut or cave – it’s believed, given their relative inaccessibility, that the painted caves of prehistoric Europe may have been used for this purpose. And then, re-emergence, coming into light and noise and celebration, being introduced as a new member of the community. Coming down a passage – one tribal initiation, copied by modern Wiccans, had the person crawl between the legs of the lined-up women as they groaned and yelled in imitation of labour. A new name, often. Special foods – in early Christianity, newly baptised adults were offered a cup of milk and honey.

We, too, can acknowledge the unresolved transitions of our lives – not necessarily with the sometimes excessive and dangerous methods used by ancient cultures, but in a way that engages our deeper minds. It doesn’t have to involve a lot of planning, money, time or even other people (although it can involve all of those, if you want). It just has to be something that makes an impression on you, that helps you incorporate the change.

Here are some ideas:

Undergo a vigil, retreat, or wilderness quest. You could use an actual cave if you have access to one (do pay attention to safety if you’re going to be alone in any wild outdoor place), but you can also do this in a room in your own home. You could even make yourself a literal cocoon of blankets to incubate in, and eventually, emerge from.

Take a new name that reflects your changed self. Not necessarily by deed poll, and it’s totally your choice whether you choose to go by it everywhere, in certain groups, online, or keep it private. Create a naming ceremony for yourself.

Modify your body somehow. Change your hair colour. Cut, or if you’re brave, shave it off. Or if you feel a little safe, controlled physical pain would be cathartic and appropriate, look into a tattoo or piercing. Or just adopt a totally new style or look. (If you need guidance, look to people like Bowie or Madonna. Those are creatives who have been successful in rebirthing themselves, multiple times.)

Walk a labyrinth. There are a few of these around, or you can mark out your own. Walking to the centre, and out again, is a meditative journey in itself.

Immerse yourself in water, ideally in a lake or the ocean (again, take care with safety). Be naked if you can do so comfortably. Have brand new clean clothes to put on when you come out.

Give yourself a gift – find an object that symbolises the change in you. A piece of jewellery would be appropriate – new or secondhand – or find an appropriate object in nature.

Give yourself a ‘second childhood’. If your first childhood lacked anything – love, security, education, freedom, fun – find ways of giving the child in you a new start, right now, whatever your physical age.

You may have other ideas, and that’s fine – what matters, is what it means to you.

There’s a quote I like – often attributed to David Bowie, that arch-self-recreator, although it may not have originated with him:

If you’ve ‘been there’ and made it back to the light, it deserves marking in some way – and celebrating, now or whenever seems appropriate.

Here’s a Pink Floyd song that resonated with me when I was going through divorce, back in the 90s…