That’s a question I’ve been asking myself this week, while listening to the radio at work, or picking up the windfalls and the horse-chestnuts from Mr. Magpie’s mother’s driveway. It seems a good time of year to consider it, as the days and nights balance and we enter into the astrological sign of Libra, symbolised by the scales.

Humans are concrete creatures, and we like to symbolise, and indeed, personify, concepts that seem abstract to us. If I were to ask most adults in the Western world to depict what Justice would look like if Justice were a person, they might, with varying degrees of skill, come up with something like this: 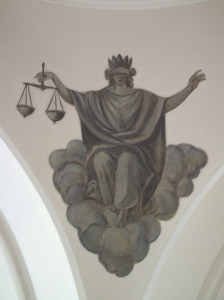 This is Justice as she’s depicted at law courts worldwide, and as she was known to the Romans: Justitita. The scales are to weigh up the evidence; the blindfold is to show that she’s impartial; and she’s usually also shown with a sword, to punish the guilty.

She herself derived from the older Greek figure, Dike, who was also seen with scales. Dike was the daughter of Zeus and Themis, and her mother was also a goddess of justice; but where Themis represented divine justice, Dike was the kind humans used to judge one another’s behaviour. One suspects a lot of early court cases may have actually involved weights and measures, but it’s an apt symbol for the balancing of events and motives that happens over many different issues in law courts to this day.

In Egypt, it was the weighing of something even more serious: the soul, represented by the heart. Famously, papyri of the Book of Going Forth by Day – better known as the Book of the Dead – depict the dead person being led before Thoth, the ibis-headed god of measurement and writing, to have their heart weighed against a feather. If your heart was lighter, you passed the test and got to dwell with the gods; if it was weighed down by evil deeds, you were eaten by the monster Ammut.

That feather on the balance – specifically, an ostrich feather – was the insignia of another goddess, Ma’at. She was said to have been produced by Ra, the sun-God, at the beginning of time – or to have existed even before him – and she was what enabled him to make everything else; she represented cosmic order, the kind of law that held the universe together and regulated the passing of the seasons. She was the wife of Thoth, which makes sense, because wisdom and justice go together.

Is Justice always female? Not necessarily. Shamash was the Babylonian god who had charge of the scales, Mul Zibanu, that formed the original constellation of Libra. The Inuit have a god of justice called Issitoq, who’s basically a giant flying eye – not unlike the all-seeing eye of God that terrified the young Martin Scorsese, painted on the ceiling of his bedroom in New York. And Norse warriors relied on the powers of Forseti, the ‘stiller of strife’, who was especially good at mediation.

But they also had the goddess Syn, who had a rather different take on justice: she was the embodiment of No. She was all about telling you that This Stops Here And Now. She was originally one of the Disir, the collective goddesses of fate.

It may seem odd to our culture that the deities of justice tend to be female, and no soft touch either. Aren’t women all about mercy and compassion?  Sometimes.  But it’s mothers who have to keep tabs on unruly children, and the female collective who’d once have had to keep order when the males were off hunting.  And men (usually the more childish ones) tend to still be a bit wary, even as adults, of what might happen when Mom finds out what they’ve been up to.

We might remember that in the Middle East, before there was Shamash – also the Sun god – there was Inanna, or Ishtar. She’s supposed to have stolen the me – the clay tablets bearing the laws of civilisation, or sometimes the laws themselves – from the male gods. But did she, or were they originally hers anyway? It was Ishtar who’d descended to the underworld, so she knew all about the dark side of life. (Back in Greece, Praxidike, the more vengeful form of Dike, was also known as Perspehone, who’d not only gone there but ended up living there.) And she’d also, in one version of her story, been raped by the gardener, Shukaletuda, and wreaked terrible revenge on him.

Which is perhaps where I come to the point. Because for me, right now, and for millions of other women, I believe Justice may look a lot like this: 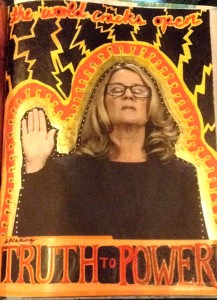 And we need Justice wearing the face and voice of Dr Christine Blasey Ford. And other women like her. Standing up and speaking the truth of their experience, in the face of sneering and hostility and victim-blaming and slut-shaming and all the other outrage the patriarchy puts on, when one of their supposed possessions dares to name what they really are.

Because too many men are still too much like Shukaletuda. Or like Zeus, grabbing at every female thing in sight without so much as a by-your-leave. Which is why Astraea, another Greek goddess of justice, fled back to the stars in disgust, because gods are no better than the men who create them.

Because the Negative Confession that dead Egyptians were supposed to speak to the assembled deities included the words:
I have not uttered lies.
I have made none to weep.
I am not a man of violence.
…and this was the standard you had to pass to be worthy to live among the gods .

Because while the magician Aleister Crowley was no paragon of virtue, especially not in the context of gender politics, he did have the wisdom to rename the Justice card in his Tarot pack ‘Adjustment’. When the balance has swung too far one way, it needs to be pushed back. Re-centred. And perhaps those whose side it’s been stuck on will whine a little, but they’ve had it their way for too long.

So here’s a question. What does Justice look like…to you?