If you believe Spirit is everywhere, all places are sacred. That’s the enlightened viewpoint. Meanwhile, in the real world, we techno-monkeys need to give things a local habitation and a name, as Shakespeare put it. So we find places that feel connected to the sacred. Or we make them. Or, we do a bit of both.

Altars (or shrines – technically there’s not much difference between them) are the most personal sacred spaces, and the oldest, going back at least to the Neolithic. The altars of organised religions tend to be the territory of the clergy, but ordinary folks have always gone off and done their own thing, which is why you find household altars in traditions from Hindu to Catholic, Buddhist to Wiccan, Shinto to Santeria and many paths in between.

(You also find them being made almost instinctively, without so much as a whiff of spirituality being involved. That corner of your desk where you keep family photos and vacation souvenirs, is an altar, of sorts. So are those piles of flowers and toys that spring up at the site of tragic crimes or accidents. And the collections of photos, graffiti, cigarettes and booze left by fans at places associated with the fallen stars of rock. Cynics may call it weird, messy, or sentimental, but it’s a very basic human impulse.)

Altars are basically about connecting to what’s meaningful in our lives. That can be for various purposes – to celebrate a seasonal or personal passage; to honour a specific deity, person or group; to promote a quality, like peace or justice; to give energy to a project…there are lots of possibilities. Since my own altar, in the spare bedroom, was long overdue for a revamp (because the mundane forces technically known as Life And Stuff do have a habit of getting in the way of this kind of thing if you’re not careful), I decided to use it as an example of one way to set up a personal altar.

A shelf or the top of a bookcase, as here, is a good place to start. You can leave it ‘as is’ or give it some sort of covering; for altars of this size, a scarf makes a pretty good altar cloth. (Hint: the Magpie finds thrift stores a great source of miscellaneous altar gear.). I also covered an area of the wall behind with self-adhesive cork tiles, which make a good base for pinning up fabric, paper, postcards and other light objects.

Next, you need some representation of Spirit. This can be an abstract symbol, a personalised figure, or anything in between. I have a cluster of deity/spirit pictures and statues that includes Brighid, Persephone, Kuan Yin, Tara, Saraswatiji, Thoth and Ganesh, which represent those aspects of Deity that feel most relevant to me and my creativity.

With the spiritual goes the material, which, in pagan traditions is symbolised by the four ancient elements – Earth, Water, Air and Fire. While you won’t find them in the periodic table, they stand for the four functions in the human psyche – sensation, feeling, thinking and intuition (if you’re into the Myers-Briggs system of personality analysis, this will sound familiar). To invoke the elements is to aim for balance in yourself and the cosmos, which is no bad thing. As with anything here, it’s not an obligatory feature, but here’s how I’ve done it:

Earth: various crystals and stones. I have aquamarine for clear communication and guidance, Botswana agate for creativity, lapis lazuli for connecting with the Divine, raw emerald for hope and insight, moonstone for intuition and imagination, and ammonite fossils for growth and development. 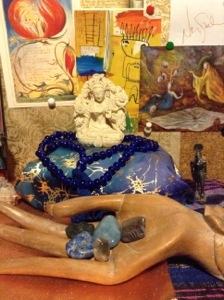 Water: bowl of water for snuffing out candles, and a shell given to me at a ritual art workshop.

Air: incense – I use the stick type. I also have peacock feathers (for vision), and a string of Tibetan prayer flags.

Fire: candles. I like plain white tealights – the colour serves any purpose, plus, they’re harder to knock over. (Safety warning: use fireproof candle holders, and never leave a lit candle unattended!). If you can’t have naked flames around, some form of electric light will do – purists may sniff, but hey, you do what you can, and it’s the symbolism that counts.

What else you have on your altar depends on its purpose. This being a general creative altar, here’s what I chose:
Images of some of the art I love and the artists who inspire me.
Tools of the trade – pencils, brushes, and an assortment of guitar picks.
Tarot and other divination/inspiration cards. I have Crowley’s version of the Temperance card, which is actually called ‘Art’).
Inspiring quotes and messages.
Representations of animal allies (spot the magpies!).
Bits of my own art – collages, a print and a brooch I made.
It’s also OK to have stuff you just happen to like. The Magpie likes Shiny Things, of course, and has to be restrained from buying quantities of festive bling in the New Year sales, so a few of those finds have made their way on there. And hearts, stars and angel wings have their own meaning beyond anything Christmassy. 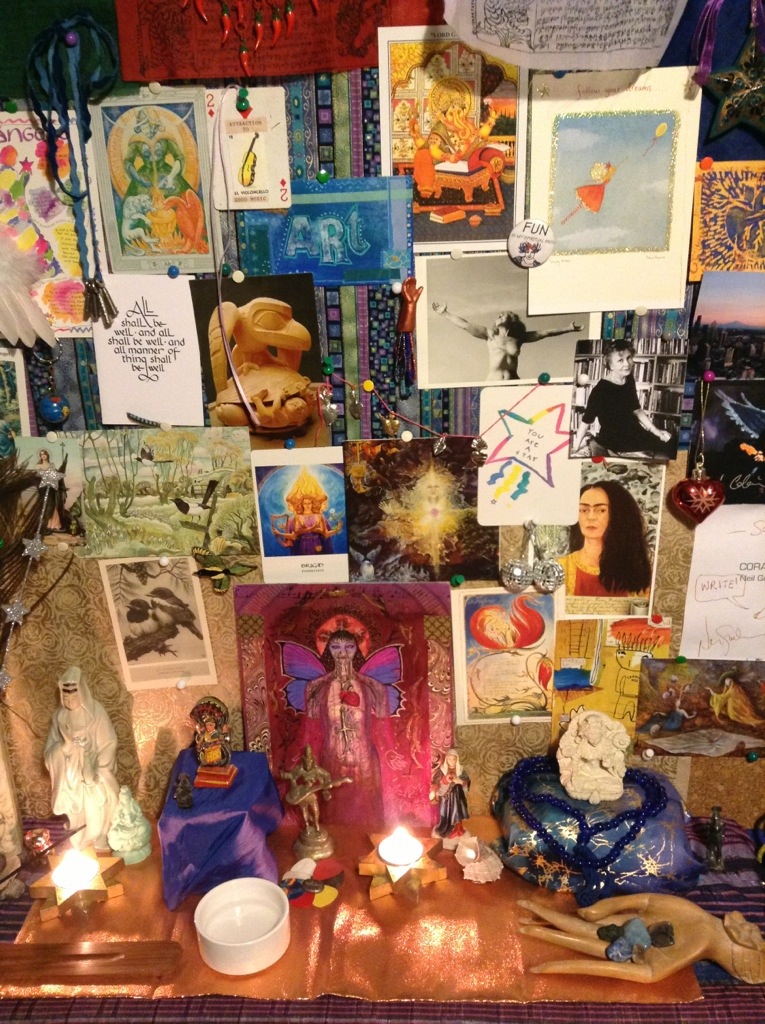 Remember, this is just one example of how to ‘do’ an altar – there are many other ways to do it, and I’ll be looking at a few of them later on.

So, what do you do with, or at, a personal altar? There are many answers to that one, too…but I’ll take that one up in the next post.