When April comes, bringing his showers sweet
To pierce the drought of March down to the root,
And flooding nectar into every vein,
Its vital spirit bringing flowers again;
When the West Wind also with his sweet breath
Has brought to life in every wood and heath
The tender green shoots; and the youthful Sun
Has in the sign of Aries halfway run;
When all the little birds burst into song,
And sing with open eyes the whole night long,
As Nature in their hearts encourages;
Then all folk long to go on pilgrimage,
And travellers go to seek out far-off strands,
And visit shrines well known in foreign lands.
And specially, from every shire’s end
Of England, off to Canterbury they wend,
The holy blessed martyr for to seek,
Who helped them in the past when they were sick.

The opening words (very roughly translated from Middle English by yours truly) of the Prologue of one of the most famous poems in the English language: Geoffrey Chaucer’s Canterbury Tales. It was one of most of my generation’s set texts at school. Mr. Magpie’s class did the Pardoner’s Tale, a solemn fable about the dangers of greed; my lot did the Miller’s Tale, a dirty romp involving a student, his landlord, the landlord’s lovely young wife, a gormless cleric, and a lot of buttocks. That gives you some idea of the variety of tales Chaucer’s pilgrims came up with, and why the cycle is still a classic.

Despite climate change, and a notable lack of rain this year, April has had more or less the same effects on the English countryside: flowers coming out, everything budding, and the birds going bonkers in a frenzy of, well, making more birds. (And still chirruping, as the poem notes, long after dark.).

And folks longing to go on pilgrimage? Well, after lockdown after lockdown, they’re longing to go anywhere at all right now. Non-essential shops have re-opened. You can get a haircut, although good luck trying, as bookings are full for months ahead. You can meet your friends outdoors, and the weather is actually co-operating right now. There’s a sense of cautious optimism.

Pilgrimage is, though, a special kind of journey. Nobody, I hope, goes on pilgrimage to Primark.

Back in Chaucer’s day, Canterbury Cathedral held the fabulously wealthy shrine of St. Thomas à Becket, who’d died a notoriously gory death, right at the altar, in 1170. But other destinations were also popular. I live not too far from the Norfolk town of Walsingham, where a visionary called Richeldis built a replica of the Virgin Mary’s house in Nazareth; in the Middle Ages, the Milky Way was actually known as ‘Walsingham Way’ – the heavens reflecting the earth. The shrine was shut down at the Reformation, but later revived, and is still popular today. Further afield, for those who could spare the time and money, there was Jerusalem, Rome, or the shrine of St James at Compostela in Spain, where pilgrims still ‘walk the Camino’. Christian shrines were at either the tombs of saints, or the sites of their miracles – often holy wells, which had probably been held sacred long before Christianity came along.

What did people go to these places for? As Chaucer notes, requests for healing, or thanks for healing already granted, were common reasons. (It says a lot about human nature that when the Black Death arrived in Suffolk, many people’s first response was to head for Walsingham…taking the disease right along with them.) Penance for sins was another. Many people, in days when travel was a lot harder, welcomed the chance for a not particularly spiritual break from the daily grind; Chaucer’s Wife of Bath, five times married, cheerfully admits that she’s on this pilgrimage to find a sixth husband!

Obviously, taking journeys to sacred places is not exclusive to Christianity. Muslims try to make the journey to Mecca at least once in their lifetimes. Jews visit the Western Wall in Jerusalem. Hindus travel to a variety of sites around India and beyond. Buddhists go to the places in Nepal connected with the Buddha’s life, notably Bodhgaya, where he attained enlightenment. The ancient Greeks went to Delphi to consult the oracle. And long before any of these faiths, the archaeology of trade goods shows that some humans covered long distances to make their way to the sites they held sacred – our own Stonehenge may have been one such place.

The instinct isn’t even necessarily religious, though. Think of places that are ‘sacred’ to people for other reasons. Home is the obvious one, and visiting your childhood home after years away is that kind of meaningful journey. To some football fans, grounds like Old Trafford or the Kop are indeed ‘hallowed’, and some do treat their journeys to a big game in that sense. Readers of James Joyce’s novel Ulysses meet in Dublin every 16th June, Bloomsday, to retrace the steps of the character Leopold Bloom.

Then there are rock stars, the ‘gods’ of a secular culture. The urn containing the ashes of Prince went on public display for the first time recently at his Paisley Park home in Minnesota, marking five years since the star’s death, and fans journeyed to pay their respects. Graceland is famous for being the central shrine of Elvis devotees. As a teenager, I travelled to Liverpool to visit Mathew Street, where The Beatles first played the Cavern Club (the site was just a car park back in the 80s, but it’s since been rebuilt). And as an adult, every time I’ve been to Seattle, I’ve visited Viretta Park, next to Kurt Cobain’s old home, to pay my respects. Those are pilgrimages of a sort, too. 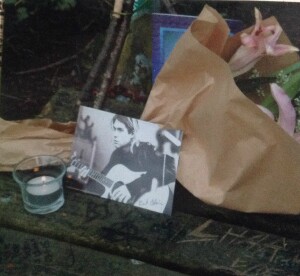 What makes a journey a pilgrimage, in this sense?

It starts before you set off, with the purpose of your journey – what you’re really heading for, besides the place. It could be any of these:
– To ask for healing, blessings, or some other desire – for yourself or others
– To give thanks for benefits received
– To remember or honour a person
– To honour the Earth
– To mark a change in your life (menopause, divorce, getting sober, etc.)
– To find an answer to a pressing question or issue

You may not actually know the real purpose of your journey, and be warned: what you think is your purpose, may change en route. That’s OK. Just know that you’re travelling with a deeper aim in mind than just taking a trip.

Walking or horseback were the traditional means of pilgrimage. Today, and for journeys further afield, we may use more frenetic and less leisurely means of transport. But if the logistics interfere (as when, some years ago, Mr. Magpie and myself journeyed to Kildare, and the bus from Dublin took two convoluted hours through tiny villages!), try to treat that as part of the experience. Be open to what happens to you, generally. And watch out for chance encounters with people along the way; they may have something to teach you.

The same applies when you get to your destination. Some sites expect particular actions of you: prayers, walking around a labyrinth, drinking well water, tying a ‘clootie‘ to a tree, leaving a flower or pebble or similar marker on a grave. Do whatever you do mindfully and with reverence. If there’s no such set action, just be there. Experience the place. Watch, listen, and take everything in. Be present.

When the time comes to leave, people have always desired mementoes. Traditional pilgrimage sites sold special lead or pewter badges to pilgrims, and modern ones still sell replicas. The Chalice Well at Glastonbury provides bottles for you to take the water home (check first if the water from any well you visit is actually drinkable). At sacred places in nature, though, the old ‘take only photos, leave only footprints’ dictum applies, although you could maybe make an exception for the odd found feather or fallen leaf.

(A note: At some modern rock n’ roll ‘pilgrimage’ sites, a little good-natured vandalism, while strictly speaking illegal (and the Magpie takes no responsibility, yada yada) is quietly tolerated – like the graffiti-covered benches at Viretta Park, or the lipstick-smeared grave of Jim Morrison at Père Lachaise in Paris. But the Victorian ‘gentleman’ traveller’s custom of carving your initials into ancient stones, trees or buildings – or, gods forbid, chipping bits off to take home! – is definitely best left in the past.)

The way back is the way you came…or is it? Not exactly. Quests in myths or fairytales often involve bringing back a precious object or person; on a pilgrimage, the thing you bring back is yourself..,but changed, hopefully in a good way. Only you can tell what that change may be, and how it plays out in your life over the weeks and months that follow.

One way to ‘take in’ this experience, like many others, is to make something of it – literally. Write a poem or song – or even maybe a series of stories, like Chaucer? – about it. Paint or draw or sculpt the feelings it brought up. Make a special piece of jewellery, a pilgrim’s badge – or staff, or cloak, or some other symbolic accessory.

The change we’re going through, and have been through in the past year or so, is one of the biggest many of us can recall in our lifetimes. We need to process this. And as we’re venturing out into the world, maybe some kind of pilgrimage is what some of us need to help that along?

May your journeys be meaningful this spring. And may you bring back something more significant than pewter badges, well water, or even a sixth husband. (I’ll just stick with the one I have now, thanks…)