One evening a couple of weeks back, going down the rabbit-hole of links that is YouTube, I chanced upon a song I hadn’t heard in some years. Canadian songsmith Gordon Lightfoot was best known in my youth here in the UK for the love song ‘If You Could Read My Mind’. But in his own country, his most famous hit concerns a historical event:

The legend lives on from the Chippewa on down
Of the big lake they call Gitche Gummee;
The lake, it is said, never gives up her dead
When the skies of November turn gloomy…

So begins ‘The Wreck of the Edmund Fitgerald’, the story of a cargo ship lost on Lake Superior on November 10th, 1975, with the death of all twenty-nine crew members. The exact cause has never been found, but it remains the worst tragedy on a body of water that’s claimed many lives over the years.

(The line – from an actual First Nations proverb – about the lake never giving up her dead isn’t just a poetic way of saying that Superior demands human deaths. It’s an observation of a local quirk of forensics. Drowned bodies usually float to the surface of the water after a short while, because of the gases released by decomposition bacteria. But in the chilly depths of Lake Superior, the bacteria can’t survive, and the bodies remain submerged. And dives made to the Fitzgerald, before the Canadian government banned further exploration, did indeed spot bodies in the wreckage.)

Listening to the song, I was reminded of something from my schooldays. A much older poem, about another shipwreck:

Half ow’r, half ow’r to Aberdour,
‘Tis fifty fathoms deep,
And there lies good Sir Patrick Spens
With the Scots lords at his feet.

Those are the closing lines of the sixteenth-century Border Ballad, ‘Sir Patrick Spens’. The King of Scotland, it relates, decides he wants to marry ‘the King’s daughter o’ Norroway’, and calls on the knight of the title to be his ‘skeely skipper’ and sail to fetch the promised bride. As you can gather, it doesn’t end well.

Whether Sir Patrick existed, and which King wanted him to sail, is far from certain, but that’s the way with folklore. Some of the Border Ballads were even older and more mythic, like ‘Thomas Rhymer”, the tale of the semi-legendary poet, Thomas of Erceldoune, and his abduction by the ‘Queen of fair Elfland’ – returning to mortal lands after seven years, blessed – or cursed – with ‘the tongue that can never lie’. ‘Tam Lin’ has a similarly magical tale of a young woman, Janet, who becomes pregnant by the eponymous hero and has to rescue him from captivity among the Faerie.

A ballad, in the Middle Ages, meant a song to dance to (from the same root as ballet). From the 1950s onwards, it’s often referred to an impassioned love song (as in power ballad). But its proper meaning is a song or poem that tells a story. Strictly, it tells that story in the traditional format of stanzas (in the metre called common metre – like ‘Sir Patrick Spens’, above) without a chorus, although there are perfectly good ballads that don’t fit that mould.

Examples? The folk song ‘John Barleycorn’. Coleridge’s ‘Rime of the Ancient Mariner’ – the Romantic poets were fond of the form. The Victorian parlour protest, ‘In The Workhouse: Christmas Day’. W. B. Yeats’ ‘The Ballad of Moll McGee’, which tells the story of a woman in rural Ireland stigmatised for a terrible accident. The Beatles, in less traditional form, have the cheerful ‘Ob-la-di, Ob-la-da’, the dark ‘Maxwell’s Silver Hammer’, and the small Liverpool tragedy of ‘Eleanor Rigby’, among others.

Many ballads focus on tales of death, injustice or vengeance, which is probably why there’s a sub-category, the murder ballad, beloved of traditions like blues and country. A wonderfully enigmatic example is ‘In the Pines’ – also known as ‘Black Girl’, or in its best-known modern incarnation, as sung by the blues legend Leadbelly and later covered by Nirvana, ‘Where Did You Sleep Last Night?’ That one has a convoluted history that goes back to who knows where and when – the Appalachians? Ireland? – with guilt, infidelity and a horrible railroad accident (or is it?) thrown into the mix.

Ballads, by their nature, give the cast of folklore to real events, but they also evoke memory. The traditional form is designed to be easy to recall, and sing, if you have a tune. It’s a form that could do with reviving for more recent events, perhaps – maybe you can think of some suitable subjects.

We’re in a time of year when we’re still remembering the dead. The war dead, over this coming weekend, in particular; the drowned, if you live near Lake Superior; but there’s another anniversary today that we shouldn’t forget. So here’s my own attempt at a ballad…

There lived a man in Germany,
Of hated memory there,
With cruel heart and cruel eyes
And stupid facial hair;

And bitter at the war’s defeat
And unemployment queues,
In prison cell he wrote a book
That pointed at the Jews.

He rose to power, and sealed his laws
Upon the written page,
Forbidding them to hold a post
Or earn an honest wage,

And many hid themselves away,
And many upped and fled,
For all could see those laws implied
That they were better dead.

Young Herschel lived in Paris then,
And he received one night
A postcard from his Polish kin
That told him of their plight.

He bought himself a gun, and to
The Embassy did go,
And shot a German diplomat,
That all the world might know.

The Führer left his dinner guests
On hearing of the news;
His propagandists rose to call
For vengeance on the Jews.

‘Make no official word,’ they said,
‘For rioting today;
But make no move to stop it
If it happens anyway.’

That night they burned the synagogues
And ripped the Torah scrolls,
And rounded up for labour camps
Some thirty thousand souls;

And glass was smashed on Jewish shops,
While many stood to cheer;
And word was sent to the police
They weren’t to interfere.

And when it all was over
In the cold November dawn,
They fined the Jews a billion marks
To add onto their scorn. 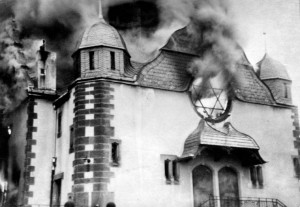 That later times should not forget
What after came to pass,
History names it Kristallnacht,
The Night of Broken Glass;

For where hate leads to broken glass –
This warning should be spoken –
Will human souls, and bodies too,
By that same hate be broken.