(CONTENT WARNING: This post contains discussion of sexual assault.)
If you’re been watching the news for the past couple of weeks, you won’t have been able to remain unaware of Harvey Weinstein. The Magpie wasn’t exactly au fait with the machinations of Hollywood, but now I’m all too familiar with his name (and face – I wish news agencies would realise that once a story like this breaks, it makes the image of the alleged perpetrator triggering for many of us).

Activist Tarana Burke came up with the suggestion that women should tweet or otherwise share the phrase #Metoo if they, themselves, had been the victim of sexual harassment, abuse or rape by men. And women did exactly that – in their millions. My Facebook feed has been full of it all week. Women from all walks of life, of all races, all religions, straight, gay, trans, young and old, of all appearances, wearing all kinds of clothing at the time, have been preyed upon by men – and again, men of all kinds, from teen boys to grandfathers, household names to next-door neighbours, boyfriends and husbands and classmates and work colleagues, teachers and bosses and strangers on buses.

It’s depressing enough, even if it hasn’t happened to you personally, to know that this kind of abuse is virtually ubiquitous. That’s part of the idea of the hashtag: to confirm to our sisters (if we were under the illusion that we were alone – and by not talking about this, we perpetuate that myth and keep ourselves isolated) that no, this is not an anomaly. And to show the men in our lives, including the good ones who wouldn’t dream of doing such things, but who remain unaware because it doesn’t happen to them – exactly what women are going through, every day of our lives.

And it’s time for this Magpie to lay my cards on the table. Because, yes. Me, too.

I was fourteen when I ended up semi-drunkenly making out with a much older man on a coach trip. My parents, who’d taken me on the trip with their social club, were sitting further up in the coach and didn’t see anything, but a friend alerted them to what was going on. They said nothing until we got home, then laid into me for ‘letting’ a man do that to me. Wasn’t I aware that he was married, a truck driver with a girl in every town? How stupid was I? And so on, and so on. Despite my painful naivety and almost complete lack of any guidance on sex (except ‘don’t’) I was considered big and ugly enough to take care of myself, so it was clearly my fault. It took seeing the Rotherham abuse case, in the news relatively recently, before I realised exactly how wrong it was. Whether I thought wanted it at the time or not, whether I’d been drinking or not, a man in his 40s does not do that to a fourteen-year-old girl. Ever.

Some months later, at a holiday camp, I was chosen as the eldest member of the kids’ club to help out one of the ‘uncles’ (note to anyone unfamiliar with such places: that’s the title commonly given to the children’s entertainers on staff) with a magic act. Lulled into false security by getting to handle a real live rabbit, I didn’t realise what was happening until he stuck his tongue down my throat backstage. I ran – but I didn’t tell anyone. Why would I? I knew, now, what the reaction would be.

There were other, later incidents that I won’t go into – including some that happened during my first, failed marriage (and the issue of men who sexually abuse their wives is a whole other can of worms). But I think you get the picture. 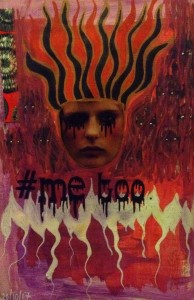 It would be easy to say that other women have had it a lot worse than me, but to compare incidents would be to discount the real damage all these things do. Being catcalled in the street, groped on the Tube, having someone make crude remarks at the office, having your drink spiked at a club, waking up in a bedroom after a college party to find a friend of a friend on top of you…they all have their own peculiar horror. They’re all part of the worldwide, millennia-old assumption by one half of the species that it has the absolute right to the bodies of the other half.

And today? We’d love to think this is historical. That now that there are women (not enough, but some) in boardrooms, colleges, laboratories, law courts and parliaments, this doesn’t happen any more. But it does. It’s happening to a woman, somewhere, right now, as you read this. And it will keep happening. As long as we tell ourselves that ‘boys will be boys’. As long as we tell little girls that boys hurt them ‘because he likes you!’. As long as our media and advertising profit from the notion that what a woman looks like is more important than anything she says or does. As long as women are seen as the prize men get for being heroic, or even semi-decent, or for simply existing. As long as groups made up entirely of men dictate whether or not women have a legal, safe choice as to whether they become, or remain, pregnant. As long as – yes, let’s not be afraid to say it – as long as a man who boasted about grabbing women by the pussy is the head of the most powerful country in the world.

This is a world that cannot continue. We can’t let it. As the heroine Promethea said in Alan Moore’s comic book series: ‘I say end this filthy mess NOW.’

We’re going to need new rituals. For healing ourselves and each other (and here’s where exorcism, which I discussed in this post, could be helpful). But also, and vitally, for change. And asking ‘could we please?’ clearly isn’t going to work any more. Not in this world.

You could interpret what follows as a curse. You could. Or you could look at it as a prayer to the Goddesses – to the archetypical female energies of the universe in all of us – to destroy, not individual men, but the idol of false toxic masculinity. The whole edifice of the patriarchy, which harms most men just as it harms women, if in different ways, yet from which many of them continue to benefit without realising it.

So with that in mind, I say:

If you stalk and harass women,
may the Furies hunt you down.
If you assume your entitlement over women,
may Lilith drive you into the desert.
If you refuse to listen when women say ‘no’,
may Skadi freeze your bones.
If you use drink or drugs to abuse women,
may Sekhmet eat your heart.
If you treat women as things for your consumption,
may Inanna hang you upon a meat-hook.
If you force your will upon women’s bodies,
may Macha curse you with the pains of childbirth.
And if you carry on
abusing us
degrading us
denying our full humanity…

…may Kali dance upon your corpse.

May patriarchy fall. But it won’t fall unless and until all of us – women and men – are willing to come together and work for it.