Now, singing as she always must,
A refugee from a love burned black,
Open-eyed through the rising dust
Goes the dust-coloured girl with a child on her back.
– Adrian Mitchell, ‘The Dust’

It starts with a young couple in a car parked overlooking Sheffield, the cheery strains of Chuck Berry singing ‘Johnny B. Goode’ on the car radio. A Phantom jet from a nearby RAF base roars overhead. The young man twiddles the dial, looking for the football results; the girl berates him, he absolves himself by getting out of the car and plucking her a sprig of heather, and the camera pans discreetly away as they start doing what young couples tend to do in parked cars. Cut to a couple of months later, and Jimmy and Ruth, for those are their names, are heading into a hurried marriage, and their respective parents are, more or less willingly, getting used to being future grandparents. It could be any gritty British Northern drama from the 1980s; and as the writer is Barry Hines of Kes fame, you’d expect it to deal with small, personal crises.

But in the meantime, sinister typed captions and a stern voiceover tell us that the USSR has invaded Iran. The USA issues an ultimatum – which is ignored. Ordinary people flee for the country, empty supermarket shelves, and try to follow government instructions on how to build makeshift shelters. But the situation escalates…until 210 megatons of nuclear weaponry fall on the UK. Sheffield, like most of society, is vaporised.

Ruth leaves the shelter of her parents’ cellar to find a devastated world. Amid falling temperatures and rising martial law, she flees to the Peaks, gives birth alone in a barn, and struggles to raise her child (in scenes that remind me of the Adrian Mitchell poem above, which I first read at school). Thirteen years later, after Ruth dies, we see her daughter Jane – ragged, barely articulate, and quite possibly brain damaged – stealing food with two boys, one of whom…but some things are better (or worse) watched than described.

This was Threads, a TV film that haunted the teenage years of every British person of a certain age. An online friend mentioned it again a short while ago, and I looked it up. You can, if you really want to, watch it here. Some of its impact is lessened by it now being a period piece, complete with the Rubik’s Cube, an open Woolworth’s store, and the half-penny still being UK legal tender. But not all. The USSR may be defunct, but there are other, perhaps more dangerous powers in the world now. And the reason a more modern update of Threads hasn’t been made is probably that the more powerful bombs now wouldn’t leave any survivors to even have a story.

As an angry teenage fledgling, this Magpie wanted to join the Campaign for Nuclear Disarmament, but my parents (staunch conservatives who reckoned that ‘if we didn’t have the bomb, those Russkies would walk all over us’) wouldn’t let me. But I read their literature and told anyone who’d listen that, famously, the survivors of a nuclear war would envy the dead. Much of my proof was drawn from the only times nuclear bombs have been used, at Hiroshima and Nagasaki in 1945, which brought up another problem. I had an uncle whom I never knew, because he died in a labour camp in Java in 1942 – leaving my mother with an implacable, burning hatred of all things Japanese. She couldn’t be convinced that every person in those cities didn’t deserve to be vaporised. (Let’s not even mention the rows we had in my house when I dabbled in Nichiren Buddhism…)

Watching Threads as an adult, I’m struck by little dramatic nuances I didn’t notice before. One in particular was the symbolism of birds. Jimmy’s great obsession is raising zebra finches in a back shed. Ruth later comes and finds the place in ruins, but takes his scorched bird book as a memento of him. Later, Jane and the other feral kids watch a battered video on a TV wired to a generator: the English programme for schools, Words and Pictures (familiar to many of us kids watching), with a jolly, prim presenter exhibiting…a bird’s skeleton. In this wasteland, you wonder, are there any birds left?

We’re familiar in the West with doves as a sign of peace – drawn from the Bible, but ultimately also from them being the creatures of Aphrodite and other ancient love goddesses. In Japan, where, understandably, there’s a strong peace movement, they have their own bird symbol. The crane is an ancient symbol of long life, of good fortune, and of fidelity between married couples; but since 1945, it has another meaning.

Sadako Sasaki was two years old when the bomb fell on Hiroshima. She was blown out of a window, but was apparently unharmed. Ten years later, however, she developed leukaemia from her exposure to radiation. In hospital, a friend told her about an old custom, in which anyone who uses the art of paper-folding, origami, to make a thousand cranes, will be blessed with good luck. Sadako proceeded to cadge all the paper she could find, from nurses, visitors and school friends, to fold her thousand cranes. Versions of the story vary as to whether or not she completed the number before her death; but her friends folded many more cranes that were buried with her. Funds were raised for a statue of her in the Peace Memorial Park in Hiroshima; another exists in the Peace Park in Seattle, and both are festooned with strung paper cranes by visitors.

It’s not hard to learn how to fold origami cranes – see here for instructions. There’s something contemplative about the act of folding them – and this particular creation requires precise folds, or it won’t work – something that makes you focus on the moment. On your breath, the paper, the fact of being alive, here, now. Perhaps that’s the aim of the exercise. 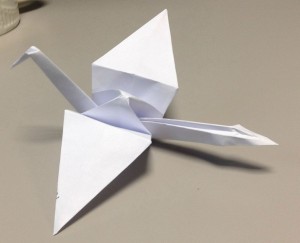 The threads that bind civilisation together are still fragile and frighteningly, easily broken.  In this week, the anniversary of when the bombs fell, maybe take a moment to fold a crane – or two, or ten, or a thousand, which may take you slightly longer – and be mindful. Because in this world, where sabres (and other, more dangerous toys) are still being rattled, someone has to create rather than destroy, and someone has to keep a place for things that fly and sing.

The passing of the year is an odd thing in modern society. Venture into any supermarket right now and you’ll see an array of notebooks, pens, lunchboxes and other paraphernalia, emblazoned with Back to School signs. Now, when yours truly was a kid back in the days of yore – aka the Eighties – this stuff wasn’t promoted till September, when the flowering of purple Michaelmas daisies (our school flower) meant Founder’s Day, and therefore, the start of the new school year, was depressingly close. I think it must be a massive bummer for any kid today to be confronted with the spectre of the autumn term when they haven’t even broken up for the holidays yet.

Some things, though, haven’t changed quite that much. Climate change notwithstanding, the wheat fields are golden and ripe about now, as they have been for centuries in England at about this time of year, and that means Harvest Home, for those of us in the Northern Hemisphere.

The Christian church used to call the beginning of August Lammas, from the Old English for ‘loaf mass’. Modern Pagans sometimes call it that too, or give it the title of the old Irish festival at this time, Lughnasad. The Irish still refer to the month of August as Lúnasa.

Lugh, known as Samildanach – the Many-Skilled – was a god of the arts in their broadest sense. He became associated with the harvest after his foster mother, Tailtiu, died – apparently of exhaustion, after she organised the clearing of the plains of Brega, in the Boyne Valley, for agricultural use – and he held a funeral feast for her at that time. It was commemorated, year after year, well into Christian times, with what became known as the Teltown Games, Irish wakes have traditionally been rowdy, and this one involved bonfires, drinking, feasting, marriages (which were provisional, lasting for a year and a day, and were called Teltown weddings), and athletic contests.

But whatever the story behind it, in all its forms, Lughnasad/Lammas has mainly been a festival of the grain harvest.

It’s become fashionable in recent times to demonise grains, especially wheat. Aside from the people who have actual celiac disease, which is a pretty serious business, lots of people today are shunning gluten because they claim to be ‘sensitive’ to it. Now, I’m all for not eating things that don’t agree with you personally, but all too often this ‘sensitivity’ seems to be code for ‘I’ll be thinner if I don’t eat this’. Giving up common staple foods does tend to have that effect on people, although it may not be either permanent or healthy.  (And some gluten-free or wheat-free products are made more toothsome with suspicious quantities of refined sugar, and weight loss or none, that’s probably not healthy at all.)

The Magpie, thankfully, has no such digestive issues. I’m also sceptical of people who insist that our Palaeolithic ancestors Didn’t. Eat. Grains.  Here’s at least one piece of evidence to the contrary.  Hunter-gatherer diets are and have been incredibly varied depending on where the people in question live, and many of them have involved whatever the local grasses yielded by way of seeds. Also, we humans simply couldn’t have spread and created civilisations as we did without grain-based agriculture. Whether it’s wheat and barley in Europe, rice in Asia, millet in Africa or maize in the Americas, much of the world’s food has been and still is based on grains, and that’s a good enough reason to be thankful for this harvest.

But at its simplest level, in times when most of us buy our food ready-made, really getting back to basics helps us to reconnect.  To this end, over the weekend I got baking, and here’s the result! 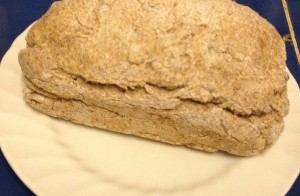 This is beer bread, and it’s the most incredibly easy bread you can make. You don’t even need to leave it to rise, which is handy for those of us not blessed with an airing cupboard. All you need is:
3 cups of self-raising flour – it MUST be self-raising or it won’t work.
1/8 cup sugar.
1 12oz can of beer – any good beer will do, but avoid ‘lite’ brews. A good real ale is the best.

Simply mix it all together till you get a good stiff dough. Give it a bit of a knead – always great for de-stressing – pop it in a bread pan, and bake it for 35 minutes at 180C or 350F. You get a fairly dense loaf with a slightly beery taste, which is good with butter and jam or strong cheese.

(This recipe, incidentally, comes from the book To Walk A Pagan Path by Alaric Albertsson, which also has basic instructions for a great many other practical hands-on skills to get you back in touch with the natural world, not just for Pagans.)

It’s also not a bad time to consider a more personal harvest. What’s come to fruition for you this year? What seeds to you want to sow for the future?  What needs weeding out of your life to allow a richer crop to come through?

Whether you bake, or brew (beer is another grain product, so a the advice of William the Omneist is also perfectly valid here), or make like our naughty Prime Minister and frolic in a wheat field, take time to think about that. And here’s hoping your harvest is a good one.