The Fourth of July is a strange thing for those of us on this side of the Atlantic. Britain is, after all, the country the US attained its independence from on this date in 1776. So the rigmarole around the anniversary has, naturally, always struck many of us as dashed impolite, chaps. Plus, there was an incident that involved wasting good tea, which is a crime tantamount to treason in itself, even without the political implications.

But we also got the help of our US pals in World War II, and among the remnants of that alliance in the Magpie’s parts of the world are a smattering of remaining USAF bases. So round here, there are barbecues on this day, no matter what the British weather throws at us. And our unfortunate pets get the bejeesus scared out of them by the traditional flashes and bangs. And there have even been whispers of red, white and blue baked goods in some local shops. Mr. Magpie thinks it’s not quite right, but as someone who’s kind of treated as an honorary American by my circle of buddies from across the pond, I find it fascinating to observe. (And take part in, if invited. Hot dogs? I’ll have cream cheese and sauerkraut on mine, thanks, but hold the ketchup.) 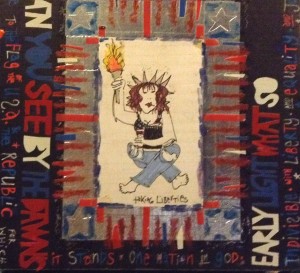 Once, many moons ago when I was writing short stories on a more regular basis, and was catching the dissatisfaction of some of my US friends with the Bush administration then in power, I started writing a modern fable in which the rest of the world decided to give the USA its much-vaunted independence for real, totally isolating it from the rest of the planet….by building a wall round the country. I can’t think why I didn’t complete it, but there you go…life is strange sometimes. (Never, ever say any fictional idea is too far-fetched to happen.)

But every time this day comes round, I think about the whole notion of independence. Autonomy – which is more or less the prerequisite for life, liberty and the pursuit of happiness – is an essential right for every human being, or should be. But there are places and times where people stress their own autonomy at the expense of other people’s, which was surely never the intention.

And more than that, none of us really are independent in any real sense of the word. We’re all the product of billions of years of physics, millions of years of biology,and thousands of years of human culture. Alan Watts rightly noted that we don’t come into the world, dropped into it from somewhere outside; we grow out of it, as leaves grow out of a tree. We’re inextricably part of it all. From birth, we rely on a vast network of people to feed us, clothe us, educate us, care for our health and well-being and provide us with all the necessities of life, not to mention its luxuries if we can afford them. Not just humans either, because all of us, even the strictest of vegans, feed on other living beings, use the products of the natural world, tread on the same earth and are, ultimately, given energy by the same star.

As individuals, we often forget this. As nations, we’re unfortunately even more prone to isolationism. And when we are aware of our dependence on other people, we’re all too ready to dismiss what they do. The more basic the service, the less likely we are to acknowledge it or reward it – hence the shitty pay and conditions given to people who do things like care for little kids and elderly people, nurse the sick, pick our crops and clean our homes and workplaces.

A few centuries ago, the nation celebrating today imported human beings from Africa, and made them do backbreaking labour that made a few white people stupidly rich (and here I’m not just looking at you, US, because Britain made a pretty pile off the back of slaves too), while dismissing the people who did that work as less than human. These days, slavery is rightly illegal…but it’s been said that we in the Western world have simply exported it, to the dangerous and poorly paid sweatshops of India, China and the Philippines (not to mention the large amount of unpaid work done in American prisons, which have an inmate population larger than any in the developed world, and which disproportionately incarcerate people of colour for minor offences). Out of sight, out of mind…except that as environmentalists say now of throwing away our waste, there is no ‘away’ any more. 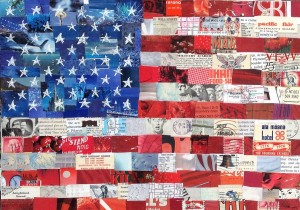 There is actually now an Interdependence Day – on September 12th – but now seems as good a time as any to think about how we depend on others, on a personal and political level. So maybe think about who provided the meat that made that hot dog (OK, maybe not while you’re eating it, but welfare in farming is kind of a big deal). Who grew the wheat that went into the bun. Who picked the salad, brewed the beer, made the T-shirt you’re wearing. Who’s hoovering your office while you have the day off. Who’s going to take care of your trash tomorrow. And while recognising who we depend on, also think of who depends on us. Because if we don’t think anyone has any right to depend on us (which is where all those debates about healthcare and welfare come from, wherever you live), we probably don’t have a right to call ourselves a society at all.

None of this means that we need to put a damper on celebrations. But do it mindfully – and remember that while independence is a great thing, the networks that connect and sustain us, are also something to celebrate and defend. With S’mores, if that’s what floats your boat…