Some people like to argue that we live in a post-feminist era. To which the classic answer is: I’ll be post-feminist when society is post-patriarchal. Sadly, it simply ain’t so. Not only are women in some parts of the world having a pretty shitty time of it with lovely things like child marriage, enforced pregnancy, female genital mutilation, dowry murder, and being kept illiterate, poor and powerless – still – but women right here, in the countries we like to think of as ‘civilised’, are threatened with the erosion of many of the rights we’ve taken for granted in the last few decades.

It’s the job of artists to be the prophets of our secular age, and one prophet who famously spoke out about this years ago is the author Margaret Atwood. The Hulu adaptation of her classic dystopia, The Handmaid’s Tale, has come to the UK courtesy of Channel Four, and is rapidly becoming even darker than the book.

In case you haven’t encountered it before, the basis of the plot is that after taking over the USA in a military coup – renaming it the Republic of Gilead – religious fundamentalists solve the problem of plummeting fertility rates by allocating fertile women to rich, childless couples.

These women are referred to as Handmaids, from the Old Testament story of Rachel and Leah, the two sisters both married to the patriarch Jacob. Gutted that she doesn’t seem to be able to pop out sons like her sister, Rachel gets her ‘handmaid’ – aka female slave – Bilhah, to have sex with Jacob and conceive on her behalf.

And this is exactly what happens in Gilead: once a month, the man of the house rapes the Handmaid while she lies between his wife’s legs, in the hope that she may conceive a healthy baby – who’ll be treated as their child. Handmaids wear distinctive red clothing with headdresses that hide their faces in public, are forbidden from reading, and don’t even get to keep their names: the narrator of the story is one Offred, literally ‘of Fred’, from the name of the man who owns her. The only other approved roles for women in this brave new world are as Marthas, servants who carry out housework and menial tasks, or Aunts, older women who train the Handmaids and wield a mean taser for anyone who steps out of line. Women too old to breed or work, ‘gender traitors’ (LGBT people), and other dissidents are executed, or sent off to distant colonies to clean up toxic waste until they die. 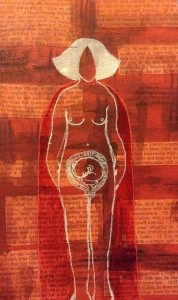 Atwood has famously said that she didn’t put anything in The Handmaid’s Tale that hadn’t happened somewhere in the world, at some time. In online discussions, people like to turn attention to what’s happening to women in countries under fundamentalist Islamic rule. But all fundamentalisms are alike, and we now have people in our own culture who believe the world would be best run along Old Testament lines, propping up both the Trump presidency in the US and the Tory government in the UK. We have men ruling that women shouldn’t be able to obtain contraception or abortion, not even if pregnancy would kill them. We have men who won’t be alone in a room with a woman they’re not married to. We have men who refer to women as ‘hosts’ and pregnancy by rape as a ‘blessing from God’. Like it or not, Gilead is closer to home that we’d like to imagine.

This Magpie read the book when it was first around, in the 1980s. Probably the most chilling moment is one that was slightly tweaked in the TV series: the moment where, at the beginning of the pre-Gilead crackdown, June and her friend Moira go to get money out of an ATM and find their accounts emptied – allocated, it turns out, to their male next of kin. Every now and again, when I’m waiting in line for cash from the hole in the wall, depending on exactly how dystopian the news has been, I find my mind drifting to that moment, and ask: what if? Which is what the best speculative fiction should always make you wonder.

Reviewers have commented how much actor Elizabeth Moss, the Offred of the TV series, can convey by looks, when she’s often forbidden to speak. It’s also been noted that the little power she clings to lies in her tiny acts of rebellion. Spitting out the macaroon given to her by the super-patronising lady of the house. ‘Accidentally’ showing a bare leg in front of her Commander’s male driver. Throwing back a line of scripture at Aunt Lydia, showing that while God may bless the meek, he also sure as hell overthrows the mighty. Little things can be powerful.

In our own culture, we need to fight back on the large scale, true. But there’s also room for the smaller acts of defiance, in our own lives.

Look at Gilead’s ideal of womanhood. Look at it closely, because it’s also the ideal of every fundamentalist ideology, everywhere. Then ask yourself how you can defy that stereotype…

They want us silent. So speak out. Talk to other women about how your lives are, what your hopes and fears are. Blog or vlog your thoughts. Respond to posts on social media. Call out unacceptable behaviour or lies. Get involved in politics, if that’s your thing. Sign a petition or make a speech or share a post. Support organisations that fight for free speech. Or like the former Offred – who left the joke-Latin admonition of this post title scratched into the wall of her closet – leave your mark somewhere where it can be found by chance. Maybe not graffiti, but a Post-it note on a bathroom wall works just as well.

They want us obedient. So rebel. Do the unexpected. Be unladylike. Break a stupid rule (if you can break it safely and without causing harm to yourself or others). Question the ones you’re not sure of. Stand up to authority. Practice saying No to small things, and remember that No is a complete sentence and you don’t have to explain yourself.

They want us modest and self-effacing. So stand up. Brag a little. List the things you’re proud of, and own them. Claim your ideas at work. Be noticed. Wear what you want, where you want. Be that rainbow-haired, tattooed, pierced, unshaven, outspoken chick the men’s rights activists love to hate.

They want us de-sexualised and dedicated to a biological function. So own your sexuality and body. Say no to unwanted touch and comments, coercive or merely blah sexual encounters. Say yes to pleasure. Experiment with toys and erotica, alone or with a partner. Visit your local clinic, get a Well Woman exam and sort your contraception. Donate to Planned Parenthood, if you’re in the US, or another women’s health organisation. Volunteer.

They want us ignorant. So learn. Read! Read Atwood’s book, first and foremost, if you haven’t. Read other feminist authors, magazines, websites. Learn to love your library. Support education for girls. Donate feminist books to a local school. Make and share zines.

They want us powerless. So claim your power. Decide what your own bottom line is as to what you will and won’t accept. Draft your own Bill of Rights. Make decisions. Own your own life, in whatever ways you can. And if you’re in a situation where that’s hard right now, for reasons beyond your control (because not all of us have the privilege of being able to control our own lives)…remember that there are others out here who are fighting for you. Hold onto that, if nothing else.

You’ll notice that many of these actions overlap, and that’s as it should be – every act we take, no matter how small, reverberates in varied and sometimes unexpected dimensions of our lives. And in other people’s, too. The Post-it that urges a sister to love herself may spur her to support a friend in leaving an abusive boyfriend, which in turn gets her teenage niece interested in women’s issues in politics, which… There’s no knowing where a small action may end up.

And even just scratches on a closet wall, seen by one person, can change that person’s world. Just by letting them know that they’re not alone, and the bastards – however abrasive they may be – can’t grind us down forever.