A belated Happy New Year! Says the Magpie, ever the optimist, in spite of…everything.

Like the remains of that Stollen you didn’t eat at Christmas but didn’t want to throw out, the events of the last week are sitting heavily with me at the moment, and will take some time to digest. We’re in unexplored territory – not the good kind, but the kind marked with ‘Here be monsters’ written in letters of what we hope isn’t, but looks uneasily like, blood – and we haven’t yet worked out how to navigate our way through it.

So I was uncertain what to write for this post. Turn to one of the things I’d planned to write about anyway, or try to comment on what’s happening in this scary new world?

In the end, neither. The Magpie is a BBC Radio 4 addict, thanks to a predecessor at the day job who listened to it, and who on her retirement bequeathed me a battered old radio cassette player that gets hopelessly lost if you try to change the station, so sits on my filing cabinet and regales me with Woman’s Hour, The Archers (the only soap I have any time for), and anything interesting in between. And the last couple of days have brought a couple of examples of what I mean when I say creativity has power, real power to change us and our world.

First, a form of creativity that doesn’t often get recognised as such, but which has results that can be appreciated by absolutely everyone: cooking. Yesterday’s episode of The Food Programme went to New Orleans – a city on my bucket list – and visited the famous restaurant, the Dooky Chase, a place that has connections not just with many of the greats of jazz and blues music (Ray Charles mentioned it in his song, ‘Early Morning Blues’ ), but with the Civil Rights movement. Leah Chase, the proprietor, is a remarkable lady who demonstrates the basic truth that food – not just physical sustenance but, some anthropologists believe, the means by which humans became socialised – is a powerful way of bringing people together. Especially when as in her case, it’s Cajun soul food. She, and her establishment, survived Hurricane Katrina, helped rebuild their community, and are set to survive whatever comes next…although, having fed two Presidents at her table, she seems to be unsure about welcoming a third.

And from today, Tunes from the Trash, a fascinating look at how some of the world’s poorest people, forced to eke out a living by scavenging in the rubbish dumps of Asuncion, the capital of Paraguay, are turning the trash into not just a bare living, but something else that makes their lives worth living – music. The Recycled Orchestra of Cateura not only makes classical instruments out of materials salvaged from the landfill – pipes, scrap metal, shoe heels, even X-Ray film – but take them on tour all over the world. In a country where, for people in the lowest social strata, there are very few options for getting on in life that don’t involve crime or drugs, the Orchestra has given pride, hope, purpose, and a sense of community to the young people of the slums.

Take a listen to either of these pieces (they’re each about half an hour long). Because Goddess knows, we could all do with some positive inspiration at the moment, and these are just a couple of examples of how the urge to create, to make something out of whatever we have and wherever we find ourselves, can help us find a sense of ourselves and others as human beings in the world. And because when the alleged leaders are more shifty and venomous than ever, it’s down to us, the ordinary folk who live and love and create, to do just that, in the face of whatever they can throw at us. 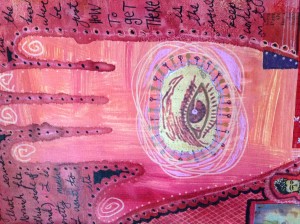