So, it’s New Year’s Eve, and the introspection that usually overcomes people at times like this has descended. I suspect it’s why this night of the year can get so…raucous. Humans, as T. S. Eliot once pointed out, cannot bear much reality; for everything else, there are various fermented fruit products to make December 31st comfortably numb and January 1st the realm of Bilious, the Oh God of Hangovers.

For ourselves, 2016 hasn’t personally been too bad here at Magpie Towers. Not spectacular, but not horrendous either.

For the world in general…hmm. How long have you got?

We had Brexit. We had the growing prominence of far-right parties in Europe. We had the fiasco that was the US election, culminating in the man the website Jezebel has been brilliantly describing all year becoming the leader of the free (?) world. We had a general rise in the cruelty, hate and ghastly smugness of racists and bigots who now saw themselves as having public approval.

We witnessed the city of Aleppo (a place I, until recent years, associated only with the hapless sailor, the ‘master o’ the Tiger’, mentioned by the witches in Shakespeare’s Scottish Play) being ground to a pulp, and the people of Syria fleeing by any means possible, only to come up against the perennial, depressing suspicion of the Western world towards anyone with brown skin and an Arabic name.

And then…it probably isn’t actually statistically true that more celebrities have died this year than in other years, but it felt that way.

David Bowie. Alan Rickman. Prince. Victoria Wood. Leonard Cohen. To mention a few of the names whose passing meant my world was suddenly a little less rich and creative.

And then, in the past week, perhaps the most gutting for those of us who are geeks of a certain generation: Carrie Fisher, known and loved to so many of us as Princess Leia of the Star Wars universe, and as a tireless advocate for greater recognition of mental health issues, was taken into hospital after a heart attack on a plane, and despite all our pleading with this crap year (which seems to have taken on a malevolent personality of its own) to spare her…has now gone to a galaxy far, far away. And then, within twenty-four hours, her grief-stricken mother, the actress Debbie Reynolds, followed her. Heartbreak is a real thing, and you can indeed die of it.

Mr Magpie and I have a tradition of seeing a movie on Boxing Day, and this year, there was no contest. I won’t give spoilers for Rogue One in case anyone out there hasn’t yet seen it, but there was applause at the end for a very good reason. At the time, Ms. Fisher was in hospital and we were still all rooting for her to make it. Sadly, we now know she didn’t (although it appears that thanks to filming already completed, General Organa will appear in Episode VIII next year). It felt like one more blow.

But a line from the movie continues to resonate with me now. The heroine of Rogue One, Jyn Erso, tells us that ‘Rebellions are built on hope.’ (In fact, she has some telling words on rebellion throughout the story.)

Someone else tweeted a post on how we can best honour the memory of Carrie Fisher in a way the Princess – and her younger Alliance comrade – would have appreciated.  And here’s a cartoon (from Twitter user David S Peppermints) that said much the same thing (with a nod to the rise of the so-called ‘alt-right’, and its smarmy amphibian mascot)… 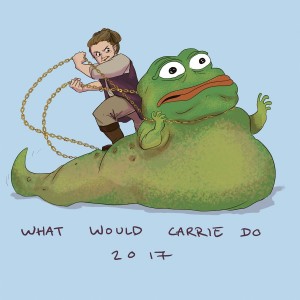 We live in a world now where there are very good reasons for rebellion, and where mindless obedience could take us down some very dark paths. There are real-world Darth Vaders, addicted to an ideology of pure power; real-world Palpatines, outwardly supporting democracy while scheming for their own ends; and real-life Jabba the Hutts, who don’t care who they harm as long as it contributes to their own gain.

And on our side? We have our share of flesh-and-blood role models – and in fighting the very real dark side of addiction and bipolar disorder, Ms. Fisher was one of those herself. But George Lucas (taking his cue from Joseph Campbell) knows the value of mythology to inspire real-world hope. And Leia – who, let’s remember, was never tempted by the Dark Side, for all that happened to her, unlike the men in her family – is an apt symbol for the fight against those enemies.

Yes, it’s been a crappy year in which a great many ugly things came scuttling out of Pandora’s box. But something else was always in that box…hope. Enough hope to build a rebellion on? Any hope is enough.

May all our 2017s be better than 2016. May we form our own Rebel Alliance against the Empire of hatred, and may we create new and amazing works of resistance in its name. And let there be hope. Because rarely have we needed it more.