As a British person, the US election result has been a bit like turning up for a friend’s engagement party, to find her new fiancé is a frat-boy bully who gooses her sister, spits at her gay cousin, locks her ailing grandma in the outside toilet, lets his rich college pals eat all the food, and hands everyone a wedding list consisting of guns, bricks, barbed wire and donations to the KKK. You’d wonder whether you wanted to be her friend any more…but you’d also feel the need to stick around because you’re now really, really scared for her.

What I did on the day after the Great Pumpkin became President-Elect of the USA:

I commiserated with US friends on Facebook.
I finished reading the late Terry Pratchett’s novel, Interesting Times. (Ah, the irony.)
I did some quilting.
I made a donation to the local foodbank (because the UK still has its own problems).
I made a pot of chilli and froze half of it for later.
I took my frustration out on a current art journal. 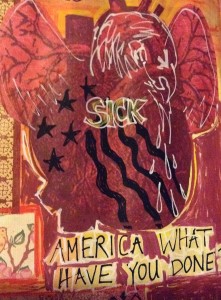 The Magpie hasn’t done the month-long novel-writing challenge that is NaNoWriMo in a few years. Nevertheless, I still keep an eye on the Facebook group where its current participants hang out, to socialise, swap ideas, and help out with research when I can. But over the last few days, a sort of creative paralysis has descended on the group. Understandably. Many people are now very afraid: for themselves, for their families, for friends in the US if they themselves are elsewhere in the world.

I’ve been feeling stuck myself since Wednesday morning, about blogging here. I knew I had to make some response to the situation, but I couldn’t think what to say. Then I woke up with this in my head. You know how inspiration happens like that sometimes?

I still love the US. I’d still like, one day, if circumstances allow, to live over there. Under the current regime, that’s likely to become rather more difficult. But I stand, as far as I practically can, with the people who know that hate and prejudice are not what the USA really means, deep down. And who are fighting it, even as we speak.

Because while we can speak all we like about coming together, as the Trumpkin himself did in his hypocritical travesty of an acceptance speech, there can be no reconciliation with people who negate your existence. Who see you, a black person, as less worthy. Who see you, a Hispanic person, as a rapist and drug dealer who should be walled out. Who see you, a gay person, as a sickness to be ‘cured’. Who see you, a disabled person, as only fit for mockery. Who see you, a woman, as a decorative object with no say over your own body. Who see you, a liberal, as an SJW, PC crybaby who should quit whining already and get a job. Who will use verbal and physical violence to show you that they mean what they say. And who, if they don’t do any of the above, turn a blind eye to them and vote for someone who advocates this behaviour, who wants this kind of world. As a hopefully decent human being (and not incidentally as a woman, as a Pagan, and as a person with mental health issues), I refuse to be ‘reconciled’ to those kind of people.

It’s not long past Samhain, when we remember the Mighty Dead. Today is Veterans’ Day, when the US remembers those who fought for freedom in the past; this weekend is Remembrance Day, when we in the UK do likewise. We’re still in the season when the veil is thin, when those no longer in the material world seem closer to us. And it’s ironic that November 9th, the day we learned what the US had chosen was also the anniversary of the day in 1989 when the Berlin Wall was torn down; and of the terrible night in 1938 when supporters of the Nazi regime took out their hatred on Jewish homes and businesses: Kristallnacht, the Night of Broken Glass. We shouldn’t forget the times in the past when humans chose freedom, or its opposite. The ancestors are watching us especially closely at those times, I believe.

What would your grandmother think? was for some of us, the standard reaction to bad behaviour when we were kids. What some of our immediate ancestors personally thought is perhaps best consigned to history. But the collective pool of genetic wisdom surely looks on appalled at what’s going on right now. (I’m told the people of the Isle of Lewis, off Scotland, the home of some of the distant ancestors of the new POTUS, don’t think much of him either.). We owe them, not to mention our own collective descendants, better than this.

A litany is a prayer with a repeated refrain. At this time, the refrain we need is a reminder to get back up, back on the horse, back to the fight we haven’t yet lost.  For the ancestors, then, and for all who are hurt and scared and questioning today, these words.

Litany of the Ancestors

Rise up, children.
You are not alone,
you are never alone.

For this one nation,
with liberty and justice for all: