I read something a few weeks back that annoyed me intensely.

The ‘your questions answered’ page in a recent edition of a certain popular New Age magazine (mentioning no names) featured a letter from a concerned reader that went roughly as follows:

I always thought that as a spiritual person, you had to not be concerned about your appearance. Yet when I see publicity photos for esoteric writers or speakers, they all seem to look very glamorous. Am I wrong to think the way I do?

The advisor replied with a well-known quote from Marianne Williamson (which I’ll come back to later) and argued that no, there is no rule that says you have to dress down to be spiritual, and why not try focusing on your looks more and see what happens? And the original correspondent wrote back to say, yes, actually, she’s feeling more confident about looking good while still being spiritual now, so thank you.

Except that this is, pardon the bird her words, bullshit.

OK, maybe it used to be true that spirituality in the West had a really rather unhealthy emphasis on neglecting the physical body to the point of punishment. The early Christian fathers were scathing about young women’s ‘vanity’; there are numerous tales of virgin saints defacing their own looks to show pagan suitors that their bodies were just a temptation to lust. (Although, one feels they might have just been trying to avoid a life of marital rape and continuous pregnancy, which is understandable.) Anorexia isn’t a modern phenomenon either; lots of pious women starved themselves (Catherine of Siena reputedly ‘miraculously’ lived on one communion wafer a day in her later years). 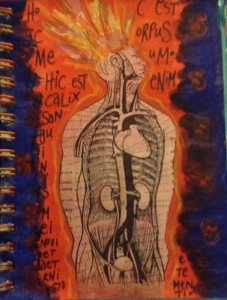 This wasn’t in any way healthy, obviously. But today, the pendulum seems to have swung the other way. Look at the major proponents of popular spirituality and you tend to find that they are indeed, as the writer noted, pretty glamorous. Or their publicity shots would have you believe that. What’s it all about, then?

Partly it’s our culture in general. If you want to sell books, it’s become imperative these days that you look saleable, and that means, for women especially, being what we Brits call ‘totty’. Add to this that many New Age authors hail from, or mostly work in, California, home of the movie industry, and you can see why they’re as image-conscious as they are. It comes with the territory.

But there’s a paradox. Lots of New Age thought derives from Eastern roots, and asceticism, suffering for the sake of purification and detachment, is a very strong strand in Hindu and Buddhist thought (even if the Buddha tried to curb its worst excesses). And while your modern esoteric practitioner doesn’t meditate in cremation grounds or stick spikes in unpleasant places, she does practice a glossy, modern form of discipline. The kind that comes in the form, often, of that insult to the perfectly capable human liver and kidneys – ‘detox’. The (medically unnecessary) gluten-free, carb-free, caffeine-free, fun-free diets. The penance that is the kale smoothie.

Now, you may like kale. If so, great, your call, but the point is that….liking whatever you’re doing is not the point in any of this. The point seems to be ‘being healthy’…which always, in this context, means ‘very thin’. ‘All life is suffering’ seems to veer perilously close at times to on faut souffrir pour etre belle.

And here we are back to image again. Because nowadays it seems, pretty often, spirituality means having to be concerned about your appearance. In a spiritual kind of way. (A phrase once used in a book by a favourite writer of mine who was, at the time, poking fun at the worst hypocrisies of the New Age movement. Who’s since written a diet book of her own. Sigh.) It means using cruelty-free makeup, without stopping to ask if you need a ton of slap on your face. It means buying expensive ‘ethical brand’ clothes online (assuming they even come in your size) before considering whether you could get something similar in your local charity shop. Sometimes, it means blathering on about pseudoscience and making unsolicited Facebook posts to tell a plus-size celebrity how to lose her belly fat (again, mentioning no names, but let’s just say this guy’s antics have almost – but not quite, thankfully – put the Magpie off guacamole for life…)

So while the advisor in our original query may just have meant that it was OK for the letter writer to choose to look good…..you can’t quite view it that way, in a magazine whose income, to a large part, depends on promoting products and treatments that have to do with enhancing one’s looks. In that context, it’s not a neutral statement.

The real question perhaps isn’t, can she look good, but should she have to?

There’s a whole massive industry out there telling women that how we look is more important than who we are. And all the affirmations in the world don’t cut it if you’re told you’re ‘less spiritual’ because you don’t fit the thin, white, able, conventionally ‘hot’ mould – think every photo you’ve ever seen of a female participant at Burning Man – of the ‘spiritual’ woman. (It is also, of course, a deeply privileged idea of spirituality, because this shit often costs serious money. And while their looks haven’t historically been quite so big a deal, it affects men too.)

This is not to say that gussying yourself up precludes being spiritual, or vice versa. Appearance can be powerful. The clergy and/or congregations of organised religions don robes, turbans, veils or skullcaps, shave their heads or mark their skins, for, to them, important reasons. And on a personal level, wearing symbolic items of clothing or jewellery, dyeing your hair or having tattoos can be potent dedications, affirmations or initiations.

But they’re not the heart of it. Actors can play Shakespeare in jeans and T-shirts; it’s the power of the Bard’s words that make the play. The Magpie did a stint in fringe theatre once, and trust me, if the costumes ever become a bigger deal than the action on stage, something’s wrong with the way the company’s being run. And as with drama, so with the dromenai (the Greek root of the word, meaning the ‘things done’ as part of the religious rituals which spawned theatre).

Ideally, playing with our appearance to express different roles for ourselves would be just that – play, the way it is for little kids playing dress-up. But too often, these days, it’s something you have to do, as a woman. Which kind of takes the fun out of it – and a lot of the magic.

Yes, you can be ‘hot’ and high-maintenance and follow a spiritual path (although, on the subject of the maintenance, it’s worth remembering a certain rabbi’s words about camels and the difficulty of using them in a sewing context). But you can also be plug-ugly and sling-on-any-old-thing and equally follow such a path. And any number of options in between. But remember that the gussying-up (I love that term, probably because it sounds faintly rude, in a good old British nudge-nudge wink-wink kind of way) is not what ultimately matters. Old-fashioned spirituality may have thrown the baby out with the bath water; the New Age version seems to have reinstated the bathwater (hand-drawn from Guatemalan mountain springs, heated over a cedarwood charcoal fire and scented with oil of tuberose and goji berries) and not noticed that the baby’s gotten fed up and crawled away. Not a mistake you want to make, really. 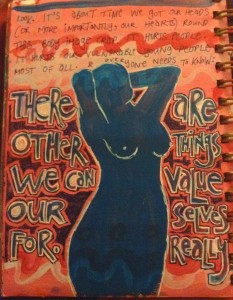 Here’s that Marianne Williamson quote in full. And note, that while the word ‘gorgeous’ does appear in this, it’s one word in a much larger and more expansive invocation of who we’re meant to be.

Our deepest fear is not that we are inadequate. Our deepest fear is that we are powerful beyond measure. It is our light, not our darkness that most frightens us. We ask ourselves, Who am I to be brilliant, gorgeous, talented, and fabulous? Actually, who are you not to be? You are a child of God. Your playing small does not serve the world. There is nothing enlightened about shrinking so that other people will not feel insecure around you. We are all meant to shine, as children do. We were born to make manifest the glory of God that is within us. It is not just in some of us; it is in everyone and as we let our own light shine, we unconsciously give others permission to do the same. As we are liberated from our own fear, our presence automatically liberates others.

If we shine, it’s going to be from the inside, first and foremost. And how we shine on the outside will, or should, develop from that.