(Note: I wrote this post several weeks ago. But when I was on the verge of putting it out there, this happened.

And then this, and…

Like many of you out there, I’m still struggling with a world in which people can be this ugly. There are no simple solutions. And we can’t always paint our way out of corners. We need activism and politics and passion and grit and real, hard changes in the real world.

But we also need inner change. And art and creativity are as potent ways of provoking change as I know of.

So I’m going to leave this post relatively unchanged. Because Goddess knows, maybe we do collectively have some demons that seriously need exorcising right now.)

Sometimes, Mr Magpie gives me book recommendations. Sometimes, I actually listen to them – although it may take a while, as I’m an old hand at the venerable Japanese art of tsundoku.

I am currently, at his urging, four books into Phil Rickman’s series of supernatural thrillers starring Merrily Watkins. Merrily is a somewhat unusual heroine: a female Church of England vicar in a Herefordshire village close to the Welsh borders, and, thanks to events in the first book, also the diocesan Deliverance Minister – read exorcist. She does battle otherworldly entities and energies in the books, but she just as often deals with religious prejudice, family rivalries, sexual predators, mental illness, and other complications of human nature. Oh, and to add to the fun, she’s also the widowed mother of a teenage daughter.

Exorcism is a tricky word; anyone familiar with a certain movie thinks of spinning heads and green vomit. (I like the story of the Greek friend of the late Peter Redgrove, who when taken to see The Exorcist in London on its release, told him ‘I don’t know what all the fuss is about. Little girls growing up in Greece always behave like that…’) The concept is something that, as the Rev. Watkins finds, the Church of England likes to play down these days, in real life as in fiction. One suspects it’s not quite British to believe in demons.

Evangelical churches, meanwhile, love the concept, and have forceful, sometimes physically violent ceremonies to ‘cast out’ every personal issue from mild guilt, through gambling, Internet porn, alcoholism, all the way to schizophrenia – with sometimes tragic results. ‘Jezebel’, a coverall name for any tendency in women towards independence, leadership and asking awkward questions, is an especially popular ‘demon’ with male pastors. And of course, anything even vaguely connected to another religion or spiritual path, real or fictional, from Dungeons and Dragons and Harry Potter, through New Age pursuits to mainstream faiths like Hinduism and Buddhism, has to be a sign of infernal infestation.

It’s a cunning tactic – demonise, thus eliminate any curiosity about, the competition. Not so effective in these days of the Internet, but still depressingly common. The more fearful people are of anything outside their comfort zone, the less likely they are to investigate for themselves and find that, hey, the world is not entirely a Daily Mail hotbed of crime, cellulite and cancer-causing immigrants after all. And as for the everyday world, so for the spiritual: most people, and beings, are not out to get you.

But whether or not you believe in other realms of being, possibly the most powerful demons are inside people’s heads. And those most prone to see demons in other people are the ones you want to watch. Carl Jung, who knew that we project our shadow-aspects onto others, would have had something to say about all this. As would W. B. Yeats, who as a member of the Golden Dawn occult order, bore the title Deus Est Diabolus Inversus – God is the Devil reversed.

In ancient Greece, a daimon was any accompanying spirit. (Some thinkers believed everyone had two, the chaotic kakodaimon and the kindly agathodaimon. Remember cartoons where a character’s being urged to do something bad by a little devil sitting on their left shoulder, while the angel on their right shoulder admonishes them to resist temptation? That’s a perfect modern depiction of those two.). Spirit guides would be the modern equivalent. Jung, again, had conversations with the kingfisher-winged sage, Philemon – who he admitted was part of his own psyche, although he acted much like an independent entity.

I suspect the most constructive way to view it is how we speak when we refer to people with addictions or mental illness ‘battling their demons’. Mental constructs, complexes, that take on a life of their own. Which can be positive, like Philemon, but can also be negative. No external diabolical nasties needed; your own guilt or fear or self-loathing can paralyse you just as effectively. And as anyone remotely sensitive knows, the vibes of other people, or society in general, can also glom onto you and wreak havoc. And if you’re weighed down by those nasties, it’s hard to help other people up.

How to get rid of them? Ritual, even if you don’t have a formal belief system, can be quite effective. Note that this is NOT recommended as a substitute for medical or psychological treatment, including medication; if you have any disorder that’s amenable to qualified help, go get it, pronto. But alongside that, some kind of exorcism can speak to the parts of your brain therapy can’t reach. Bell, book and candle not strictly necessary – although light, sound, and words may be good elements to use. Here are some ideas.

When I was in counselling, a few years ago, dealing with emotional fallout from a person in my past, my counsellor suggested writing an unsent letter. She had me read it out to her during a session, then took it away and destroyed it. You could burn yours, or shred it, or dispose of it by any method you choose. This is especially good if you’re still suffering from the effects of someone else’s actions. Not so much banishing them, more the mental image of them that’s still in there controlling you, and the feelings connected with that. (I always advise against using anything to symbolise an actual person, or group of people, for this purpose, because of the tendency to demonise people I mentioned above. We need to dig deeper.) 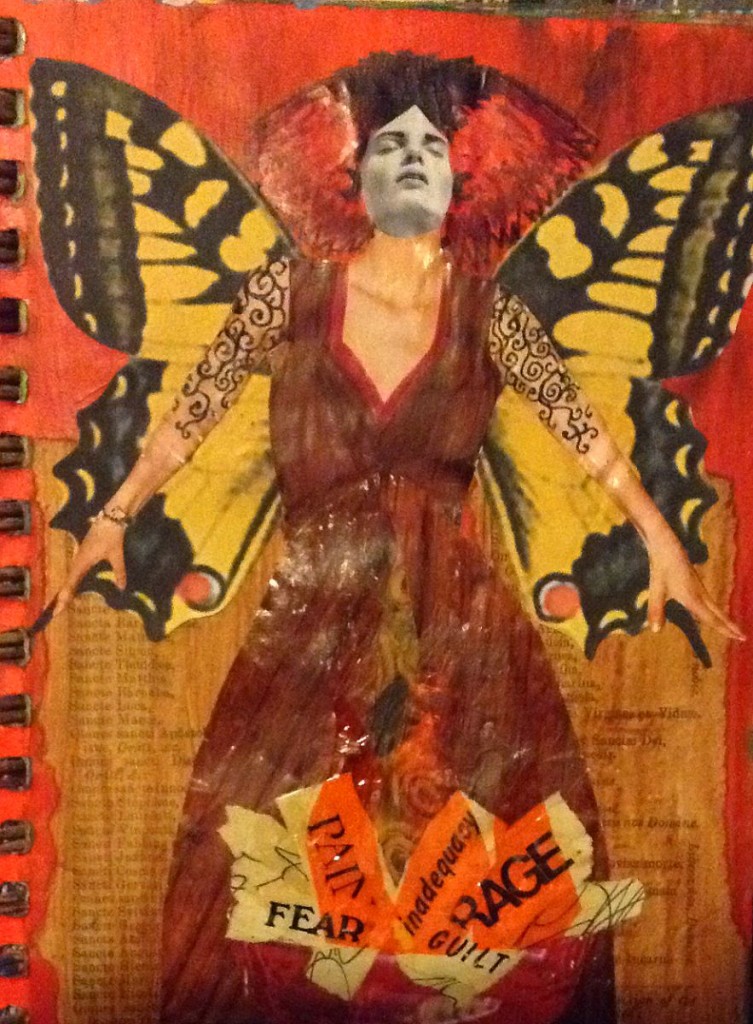 Another version was something I did back in the 90s when my first marriage was on the verge of breakup. I was staying the weekend with a good friend in Poole, Dorset. One night, we wrote out all the stuff we wanted to be rid of – in my case, the frustration and pain of being in a relationship with someone who no longer wanted to work to save it – went to the beach, tied our notes round largish rocks, and lobbed them as far as we could into the sea. I wouldn’t now recommend leaving paper out in nature – it doesn’t biodegrade as quickly as you think – but you could scratch words or a symbol of what you want to be rid of into wood, chalk or some other natural material before abandoning it in water, or burying it in the soil. And you can always just focus on the rock or whatever and will your negative emotions into it.

There are also down-and-dirty urban methods. Write or draw on toilet paper and then flush it. (This works best if you’re connected to the sewers; Chez Magpie has a septic tank that gets emptied once a year, so those bad vibes would be hanging around a while.) Or, write on a glass jar or bottle, then take it to your nearest recycling bank and chuck it in. A good resounding crash of breaking glass really does help to ‘break’ emotional stasis. Even regular old recycling is pretty cathartic for that reason.

Basically, your aim is to give yourself something concrete to focus on as the form of your ‘demon’, then destroy or get rid of it. Try ripping up that letter and making it into a papier-mache positive symbol. Or make a painting of the nasties and cut it up to incorporate into a collage of a brighter future. Or make a ‘monster’ out of natural materials, then destroy it. Or build an image from sand on a beach, and let the tide come in and wash it away. Get creative. And ideally, as in some of these examples, use the residue or results of your destruction to make something new – because while nothing is ever really destroyed, it can be transformed for good.

Our big monkey brains like to think they respond to logic and reason. But as religions and advertising executives are well aware, what they actually respond to is bells and whistles – a bit of drama: psychodrama, if you like. So if you want to throw a cardboard monster on a bonfire while you stomp, yell and parp a bicycle horn, go ahead. Only, um….you might want to let the neighbours know. You don’t want any stray vicars coming along and getting the wrong idea….