To Christians, it’s the festival commemorating the death, and resurrection, of Jesus.

So…what’s with the eggs? I mean, the Magpie approves of anything involving tasty treats – especially if they’re wrapped in foil (Shiny Things!) – but seriously, what’s the connection between a saviour who died on a cross, and eggs, or chocolate imitations thereof?

Well, since humans first kept poultry, and possibly as hunter-gatherers raiding nests before that (I mean, us eating eggs had to have started before we realised exactly where they come out of, right?), we’ve have been fascinated by the idea that life can emerge from something that, externally, looks featureless and non-living.

Of course, we worked out, much later, that we come from eggs ourselves, but as we’re mammals, those eggs are somewhat unimpressive to anyone outside of an IVF clinic. And since the eggs of other creatures aren’t particularly tasty – with the possible exception of caviar – it’s bird eggs that have been a focus of myth and magic down the centuries.

In some creation myths, the universe itself hatched from an egg – as opposed to science, where it hatched from a singularity, which in symbolic terms may not be that dissimilar. (But have you ever tried to buy a chocolate singularity?) Eggs have been used as emblems of life, as good-luck gifts for babies and brides, and as vectors to take away disease in healing charms. Fairytale villains have kept their souls in them, magical geese laid golden ones, and the jeweller Faberge made exquisite jewelled eggs for the Russian court.

Oddly, nobody’s linked the Easter egg to the one egg that would have been involved in the original Easter story: the traditional roasted egg of the Passover Seder meal (which is what most scholars agree the Last Supper was). Considering that this egg symbolises both the not-yet-emerged life of the Jewish nation, and the Temple sacrifice – which Christians would say was the forerunner of Christ’s own sacrifice – you’d think that connection might have been made. All we do know is that the first mention of Christian Easter eggs was from Mesopotamia; that since eggs were banned during Lent, eating them again was seen as an Easter ‘thing’; and that some Christians have seen them as resembling the stone rolled away from Jesus’ tomb.

Of course, plenty of explanations also go round involving eggs as a pagan symbol of rebirth, which they were, and as an attribute of Eostre, Saxon goddess of Spring – which we have no evidence of. While there are traces of a European dawn goddess called Eostre, or something similar, we know little about her rituals, and they probably didn’t influence Easter aside from the name (for which we can thank the Venerable Bede, who may have noted it while he was collecting Saxon folklore in Kent). Neither is there much evidence that bunnies were her sacred animals, although hares (rather than rabbits, a comparatively late import to Britain) have been seen as sacred signs of lust, magic and the Moon since ancient times. But this is one more myth that, having been widely circulated, refuses to die. And if it’s seen as myth, rather than as historically proven belief, and if it helps people celebrate the season in their way, why not? 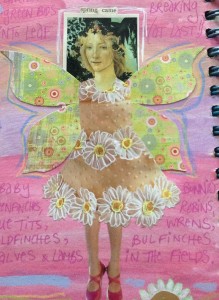 Eggs, however they came to be used this way, are still a powerful symbol. Spring is a good time to take stock and ask yourself: What do I want to develop in the coming months? Here’s a project to give some springtime energy to those goals.

It’s pretty easy to get hold of hollow eggs right now, the kind that come in two halves, in plastic, card or papier mache – lots of craft shops have them, and some chocolate companies package their wares in them. (You only need the egg, so I leave to you the tiresome and gruelling task of disposing of the contents.) You can decorate them however you want; try paint (sanding and a layer of gesso first will help, especially on plastic eggs), glitter, decoupage paper, beads and other bling, artificial flowers – whatever you like.

(Note: My ‘galaxy’ egg in the picture below was painted with the help of this tutorial.)

Then, fill your egg with small objects that symbolise the things you want to ‘hatch’. I won’t reveal what went into mine, but try things like crystals and polished stones; beads or buttons; small feathers, shells or seeds; milagros, religious medals or other charms or jewellery…use your imagination. You might like to create a ritual for naming what each item stands for as you place it in the egg. 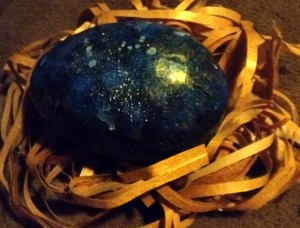 When done, put your egg together and keep it in a safe place. And then…leave it to incubate. Because like the contents of eggs, like seeds in the ground, things tend to grow when we’re not looking…

The Magpie has, somewhere back in the family, Irish blood. While this may give me a few things – an auburn cast in my natural hair colour, a tendency to sunburn, a taste for soda bread and Guinness and W.B. Yeats and all manner of other good things, it does not make me particularly amenable to St Patrick.

For starters, he wasn’t even Irish. For another thing, there’s this legend about him driving out the snakes… 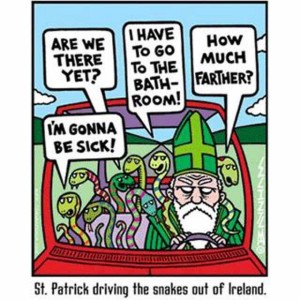 Bad jokes aside, it’s a biological fact that Ireland has never had its own native reptiles, so there’s not even the faintest possibility of this being a literal story. And while parts of the country have Jurassic rocks and the ammonite fossils commonly found in them, they never led to pre-Darwinian stories that St Patrick turned snakes to stone, as St Hilda’s supposed to have done in Whitby.

As snakes are, per the Garden of Eden, a Biblical symbol of evil, it’s been speculated that the legend is a symbolic account of St Patrick – or at least, his followers – ousting paganism, and its priests and priestesses, from the country, a process which was probably less peaceful and more coercive than Christian authorities have made it out to be. And while I may be biased, religious persecution is not cool. Not even if you commemorate it with parades and shamrock cupcakes.

(Although, if you want to celebrate anything at this time of year that involves booze and revelry, it’s been pointed out that the Roman festival of Bacchanalia fell around this date.)

One thing St Patrick is reputed to have left us that isn’t all negative is the poem attributed to him, known as The Deer’s Cry. This stems from a legend in which Patrick and his followers had to travel in the territory of a hostile pagan king, and the protective prayer created the illusion that they were nothing more than a passing herd of deer. Here’s an extract:

I arise today
Through the strength of heaven:
Light of sun,
Radiance of moon,
Splendour of fire,
Speed of lightning,
Swiftness of wind,
Depth of sea,
Stability of earth,
Firmness of rock…

You can read the whole thing here.  The poem is still popular in the Irish Catholic Church, and has been turned into several well-known hymns. It’s also known as the Breastplate of St Patrick, and this derives from the name of the poetic form itself: lorica.

Lorica is the Latin word for ‘breastplate’, and the military metaphor comes from early Christianity (which drew on so much military imagery that non-Christians eventually became known as pagani, ‘civilians’) – especially, from the ‘armour of God’ passage in Ephesians 6:11. The lorica was a form of protective chant that became popular in early Christian Ireland – around the 8th century CE – and was attributed to several saints apart from Patrick.

Patrick’s version is robustly, and you could say militantly, Christian.  But the form may derive from earlier, pagan forms of incantation. (There are similar ‘shielding’ chants in the collection of Scots Gaelic prayers, the Carmina Gadelica, which clearly do have more pagan roots.) And the form itself can be used with any belief system, because it’s basically a request for protection from Spirit, and from the natural world, endowing yourself with its qualities. Which you have in you already, so it’s really an acknowledgement of yourself as part of nature.

If you want to give it a try, look around you at what’s happening in your part of the world right now. Nature, after all, isn’t homogenous; you might be in a different climate or ecosystem or (if you’re in the Southern Hemisphere) a different season from where I am now. And even in the same location, at the same time, as Tolkien said: ‘In every wood, in every spring, there is a different green’ – and you may not be seeing the same colours.

I call to shield me this day
The threefold power of the worlds:
Stability of the green earth,
Freedom of the airs above the earth,
Yielding of the waters about the earth.

I call to shield me
The powers of the year’s turning:
Beauty of frost,
Cunning of ice,
Secrecy of moist soil,
Warmth of sunlight,
Purity of meltwater,
Persistence of green shoots.

I call to shield me
All power of growing things:
Modesty of snowdrop,
Exuberance of daffodil,
Bravery of crocus,
Joy of trees in bud,
Joy of all things greening.

I call to shield me
All powers of fair creatures:
Cheerfulness of goldfinch,
Grace of swan,
Pride of robin,
Watchfulness of hare,
Ubiquity of rabbit,
Community of rook,
Bluster of crow,
Dignity of deer,
Eccentricity of lapwing,
Care of ewe,
Resourcefulness of magpie,
Powers of beast and bird,
Powers of all living things,

From the cruel words of strangers,
From the meddling of the careless,
From the fists of bullies,
From the tongues of politicians,
From the stilling of songs,
From the eye turned from suffering,
From all ill will,

May I be shielded and guarded
This day and night
And this day to always.