Hoping Valentine’s Day found you happily coupled, or contentedly single, and regaled with whatever constitutes romance to you, be that roses, toy bears, or reruns of cheesy old comedy on Netflix. (The Magpies flitted off to a local Tex-Mex for an excellent dinner.)

Most people forget that it’s actually Saint Valentine’s Day – much less that the eponymous saint was allegedly a bishop (rather charmingly, he was Bishop of, among other places, Narnia – yes, it’s a real place, a town in Umbria, alleged to be the geographical centre of Italy) who secretly married couples when it was forbidden because of the military draft, incurred the wrath of the Emperor Claudius and was martyred as a result. Or sent love letters signed ‘your Valentine’ to his wife from prison. Some people have suggested he was derived from the Gnostic teacher Valentinus, who taught that the Divine was a male-female dyad. You choose – the Catholic Church took him off the canon (Vatican-speak for ‘he probably never existed’) in 1969.

The celebration the greeting-card industry knows and loves originated in the Middle Ages, and was probably not derived from the Roman purification festival of Lupercalia (although if whipping each other with goat sinews is your thing, who am I to argue?). The date was traditionally the time when birds chose their mates, and it came to be a time for declaring your love to your chosen sweetheart. It was the Victorians who really popularised the cards, and it all just escalated from there.

Hearts are everywhere as the symbol of lerrrrve, and it’s a symbol that bears looking at more closely. 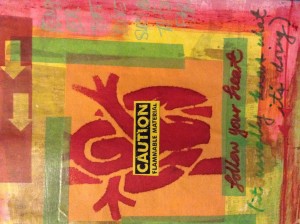 The heart – the anatomical kind – is a fascinating organ. In our own species, it forms from two parallel vessels in the embryo, and twists itself into a little nubbin that starts beating three weeks after conception (although to be fair, isolated heart cells grown in a Petri dish will beat spontaneously – it’s just what they do.) The number of hearts varies in some animals: octopuses and their relatives have three, the hagfish possesses four, and Time Lords, of course, have two.

The symbolic heart, though, has had a bizarre history. In Egypt, ancient China and India it was considered the seat of the soul and feelings; the Egyptians believed the heart-soul, the ab, depicted as a little jar, would be weighed against the feather of truth to determine your destiny in the afterlife. (They didn’t have a clue that it pumped blood – the priests who mummified corpses, finding the arteries empty, assumed they carried air.). Indigenous shamans often had their hearts removed and replaced on initiation. And the Aztecs interpreted the command to ‘open your heart to the light of the Sun’ a little too literally.

In Europe, the symbolism of the heart got really interesting in the 1600s. St Margaret Mary Alacoque, a French nun who punished herself by eating dry bread, sleeping on broken crockery and doing other gruesome things we might today call self-harm, had a vision of Christ showing her his Sacred Heart – flaming bleeding and crowned with thorns – and requesting special devotion to it. St Jean Eudes, not long after, popularized the cult of the Immaculate Heart of Mary, pierced by swords as described in Luke 2:35 and wreathed with roses. Both have been beloved, if gory, symbols in the Catholic Church ever since. 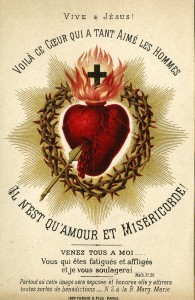 The heart we use on Valentines, though, isn’t quite so innocent. Some anthropologists think it’s not based on the anatomical heart at all, but on the female buttocks! Others have pointed to the shape of the seed-case of a now extinct plant, silphium, renowned in the ancient world for its ability to prevent the act of love from having…unwanted consequences, and also bearing a resemblance to certain parts of the male anatomy.

Whatever the origin of the symbol, no other organ has been quite so evocative. Hearts in music can be warm, cold, wooden, glass, get broken, stolen, lost, or left in San Francisco. Hearts get carved on trees, thrown as confetti, cut into tombstones and printed on playing cards (the hearts suit was originally the suit of cups in the Tarocchi – in modern Tarot, appropriately, the suit governing emotional matters). In fairytales, they can be hidden outside the body, like a detachable soul. The wicked Queen demands Snow White’s heart (appropriately, because as a classic narcissist, she doesn’t have one of her own) and is given a substitute by a quick-thinking woodcutter. And Edgar Allan Poe tells of a heart that betrays a murder…or is it just the murderer’s guilt, playing that da-dup, da-dup in his ears?

A heart can be an interesting thing to create, be it in clay, wood, fabric or paint. (If you want to save time, many craft stores sell paper mâché or polystyrene hearts you can decorate.). What do you think your own heart, symbolically, looks like? If you wanted to give a heart to someone, how would it look? How does the idea of the heart resonate with you?

Try playing with the idea. Here’s Charles Trenet with an onomatopoeic tribute to this pesky, wayward vital organ. Meanwhile, if you’ll excuse me, somewhere round here there’s chocolate with my name on it…