And so, once more, it’s Samhain, Mischief Night, Punkie Night, Hollantide – Halloween, if you will. And once more, the argument ensues about What It All Means.

Is it the ancient pagan Celtic festival of death and the Otherworld? A Christian Catholic remembrance of the souls in Purgatory? A popular festival of dressing up and letting your alter ego out? An insidious American import that should be banned from the UK along with the Hershey bar wrapper it came in, a whoop-de-do for the capitalist purveyors of all ghoulish things made of plastic, or a dangerous trick to lure people into the occult, spike their toffee apples with razor blades and sacrifice them to Satan? Or is it, as people staggering to load their car boots with litres of brandy will tell you about Christmas, ‘for the kids, innit?’

The answer is that (with the probable exception of the Satanists) it’s a bit of all of them. Popular festivals come from people, and people make what they will of them – from a diverse pool of ideas.

True, any ‘ancient’ origins for Halloween are complicated by the fact that our ancestors didn’t or couldn’t write much down, and that successive invasions have either incorporated or (usually unsuccessfully) struggled to suppress the customs of the cultures before them.

Ronald Hutton, that meticulous researcher of British folk customs, has written this excellent piece for the Guardian this year. As you can see from the comments, there are some who refuse to believe that Halloween has any pagan elements, such is their fealty to the idea that nothing good or interesting or significant can have come from paganism.

It’s true that some modern Pagans have been somewhat – let’s be kind and say, creative, in reconstructing our history. We now recognise that Margaret Murray‘s ideas of a persistent, organised witch-cult were, to say the least, flawed; that nowhere near nine million witches died in the ‘Burning Times’, that (in Britain at least) most of them were hanged, and that almost all those who died would have identified themselves as Christians (even if, like much Christianity through the ages, their formal belief went alongside an informal body of folk knowledge and belief that wasn’t Christian at all, no matter how you gloss it).

So why was this stuff claimed to be true in the first place?

I think, because of the dominant religious traditions. In Western Europe, that mostly means Christianity, which, with Judaism and Islam, is one of the ‘religions of the book’. From quite an early stage, the written word has been how Christianity was passed down. It soon became fetishised, treated as sacred in itself: the Word, the Holy Bible. Alternative written versions were destroyed or hidden; oral versions which emerged as heresies were suppressed. The idea of one authoritative, authentic history has been important to the faith.

So when an alternative belief system emerges…the first thing it gets asked by our culture is: Where does your religion come from? How far back does it go? What’s your Tradition?

Ah, tradition. That bugbear of the hapless milkman, Tevye, in the musical Fiddler On The Roof, as he attempts to reconcile the Jewish traditions of the shtetl with the new world of choices and changes. It’s as hard for him as it is for anyone dealing with a sceptical, questioning culture. We mistrust the new until it’s proved itself. And many people are especially distrustful of Made Up Religions. Think how people deride Scientology (although, its science-fiction origin myth is probably the least disturbing thing about it). Look at how some still mock the Latter Day Saints – although there’s possibly little between Joseph Smith’s visions and those of many other breakaway prophets though the ages, apart from him being historically recent.

So what do you do when faced with the fact that your religion dates, provably, back to about the 1950s? You adopt mythologies. And sometimes, you start believing in their literal reality rather too strongly, just to give yourself the anchor of history. And then you fall foul of the people who dig around in the annals and find out that hey, that’s not how it happened. And that gets interpreted as meaning that the entire edifice of your belief system is Not True.

I think the solution is to have a better understanding of what mythology is. Some of the authors in Goddess spirituality have begun to admit that OK, maybe there’s scant evidence that there was ever a universal prehistoric matriarchy. But, they say, is there any harm in imagining one if it gives us hope that if it wasn’t always this way, maybe it doesn’t have to be in future?

More often than not, the origins of any given tradition or custom that goes back more than a couple of hundred years will range from ‘It could have come from a variety of sources’ to ‘We have no idea’. This applies to everything from Morris dancing to the Easter Bunny. It may be true, as Terry Pratchett’s brilliant Hogfather postulates, that even the concepts of deities themselves arise in response to human needs. And sometimes, customs themselves do the same.

The Northern Irish town of Derry was, in the 1980s, still in the thick of the Troubles, that terrible civil war between Loyalists and Republicans. On Halloween 1985, there was a bomb scare at a bar in the town, which had to be evacuated. The patrons, most in fancy dress, finding themselves out in the street, began walking. They were joined along the way by other costumed revellers out for the evening. That spontaneous unexpected night walk has, thirty years later, evolved into the Foyle Carnival, now one of the biggest Halloween celebrations in Europe, complete with fireworks, river gods and, the modern world being what it is, live streaming online.

Maybe, then, it’s not where the beliefs come from that matters in itself; it’s how we choose to interpret them now. How we choose to use what’s been given to us. To provide for both the primal human needs our ancestors had, and our own, more modern concerns.

So if you want to treat Halloween as a Christian festival, go right ahead. If you see it as an excuse to dress up and party in the face of the coming British winter, feel free. And if you prefer to honour the time of the thinning veil between the worlds, and to commune with the ancestors, however you interpret that – that’s also fine. We all have our own mythologies, personal and communal, and the seasons are big enough and rich enough to encompass all of them.

And as for the fiddler on the roof – who knows what he meant? Maybe Marc Chagall, the artist who first depicted him, knew. For Jews, Purim (which was back in March this year) is the traditional time for dressing up. But an unexpected, ghostly figure like the fiddler of Anatevka seems to suit this season, too. Le’chaim – to life! And of course, to death…which is just another part of it all. 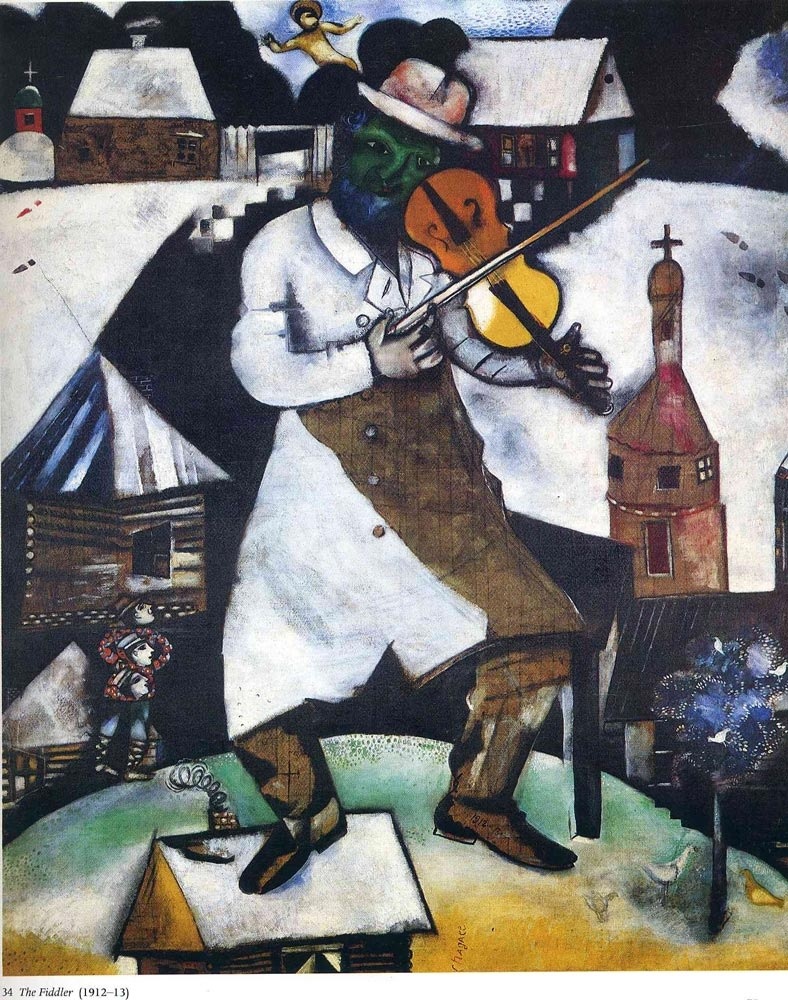