Yes. I know. It’s been…how long? Better not to say.

A professional procrastinator like myself always has a raft of excuses to sail off into the sunset on. This is not that leaky vessel. This is, however, an attempt to regain your attention and interest by sharing a few of the Shiny Things I’ve found, jewels I’ve tripped over on the way to the library, and essential and not so essential tasks I’ve been undertaking over the last…again, let’s not go there.

First off, Mr Magpie has by now just about emerged from his more or less annual bout with the Black Dog. That unseemly beast always seems to strike in the spring,and even for me, trained in Mental Health First Aid, it’s tricky. An online friend has suggested allergies may be a factor, so we’re looking into that. The doctor has directed him towards CBT, which may or may not help.

In more colourful news, two people I know through my day job have given birth in the past year, which resulted in me going on something of a patchwork jag. I’m hoping that two baby quilts may be the start of a growing habit of completing things, which cannot be bad. A set of mug rugs (see below) have made their way to Mr Magpie’s mother, and there’s also a bolster cushion, a Scottie-dog-shaped pillow (because, squares are easy, and because, adorable) and a couple of skirts in the offing. 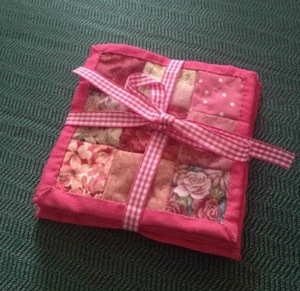 This also means that, not having done any patchwork in a few years, I’m back to salivating like a kid in a sweet shop over the wild array of fabrics, and buying way too many bags of scraps. There may, however, be a solution in sight. During a local quilt fair, I came across the lovely people of Project Linus – a project that aims to give children in difficult circumstances (bereavement, terminal illness, various disasters) a ‘portable hug’ in the form of a quilt to keep. The organisation is active worldwide, so if you’re handy with a needle and would like to make life a little better for kids in need, go check out their guidelines. They also take fabric donations, if you have more fat quarters than you will ever use (like someone not a million miles away from this blog, hem-hem-hem!)

Something else I’ve been doing over the last few months is sorting through old journals. I’m one of those people who never travels without a notebook – a sort of mental Bag of Holding, you never know what you’re going to find in there. Also, for a while, some years back, I undertook the ‘Morning Pages’ exercise from Julia Cameron’s inspirational book The Artist’s Way. That’s a lot of notebooks. Some of what’s in there is stream-of-consciousness babble, as you’d expect – and that’s OK, because that’s what Morning Pages is designated to do: get the crap out so you can get to the gold.

And there is gold. There are insights into my life at the time – where I really wanted to be, whether or not I wanted children (eventual answer: no), and why one destructive person was going to need to play a much less important role in my life for the sake of my health. There are project ideas, song lyrics, lists, rants, and other randomness. Much of this has ended up decanted into to its own permanent notebooks or computer files; pages have been shredded or incorporated into mixed-media projects. It’s a bit long-winded, but it’s clearing space, which is a good thing, right? 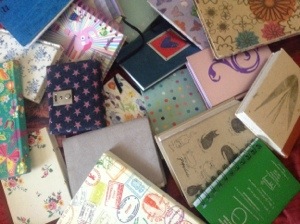 More about journals in another entry soon. But, on a not unrelated subject, the documentary Cobain: Montage of Heck came out a short while ago, and I couldn’t really not see it. Kurt, as you may have gathered from some of my previous entries, was a man after my own heart (or perhaps more appropriately, intestines) in, among many other things, his attraction to the cut-and-paste, bricolage method of doing things. Montage takes its name from one of the taped concoctions of found and stolen sounds he experimented with in his pre-fame days living in Olympia, WA, and its style from his life: a patchwork of live footage, home movies, photographs, interviews, tapes, animation and images from his notebooks, many previously unseen. The result is as close as you’ll ever get to taking a wild roller-coaster ride through a hyperactive, bipolar artist’s brain – and as such, is at times harrowing and heartbreaking – but it’s also a vivid, often darkly funny picture of his life beyond the rock n’ roll hype. It’s coming back into US movie theatres as I write, but it’s also available on DVD, and it’s well worth a watch.

I also went to see Mad Max: Fury Road – mainly at Mr. Magpie’s behest, although I do have a soft spot for Beyond Thunderdome (that scene where all the kids do the cargo cult thing is a little gem of anthropology – ‘Member this?’ – and you can add Aunty Entity to the list of fictional characters I want to be when I grow up). I’m now going to have to go back and watch the previous movies. I reckon if we have to have apocalypses, we may as well have them look awesome. (And I’m going to have to write about the whole apocalypse myth thing in another post, too.)

Speaking of which, if you’re in the UK you’ll know all about how the General Election went. They say you get more right-wing as you get older, but this Magpie just becomes more of a socialist – a term which, like liberal and social justice warrior, seems to have become a stock insult for some people online these days. Given the sort of person who insults me that way, I regard them all as compliments. From my nest of paperclips in the somewhat shaky tree of the public sector, I watch the situation and wonder when the British public will have had enough. This is the country of Thomas Paine and William Blake, and yet we all seem to be sitting back and letting ourselves be taken back to…when? A long way beyond the days when Rik, may he rest in peace in the bosom of Trotsky, declared that ‘Thatcher’ was a useful swear word. (Right, kids?)

Thankfully, art – the kind that makes us feel, and think, and hopefully, act – is still with us. So for now, along with yet another apology for my own apathy, i leave you with an artist I’ve only too recently become acquainted with: the brilliant performance poet and maker of modern mythologies, Kate Tempest. Her album, Everybody Down, is well worth checking out, but here’s a song that particularly rang true for me. Because don’t we all have times like this?