The Magpie is a Lady of a Certain Age – which as Lord Byron once bitchily noted, means ‘certainly aged’ – and it looks as if the fate of all womankind has crept up on me at last. Yes, at nearly 46, my doctor has confirmed that I appear to be starting that journey known medically as the menopause, and in feminist spirituality as ‘croning’.

Some people would say we have a skewed view of the human lifespan, given that we’re so much longer-lived than our ancestors; that forty-five or fifty, middle-aged by today’s standards, would actually be ancient in, say, the Neolithic era. Others would counter that lifespan averages of the past are themselves skewed by the appalling child mortality rate before vaccination and antibiotics; survive till the age of five, and you actually might have had a chance of reaching sixty or seventy.

What is definitely true is that getting older was a tougher business for ancient cultures. A few weeks ago I was taking a much-needed vacation in York, and visited the attraction known as Jorvik. Jorvik is notorious for its ride round a reconstructed section of the Viking city, including animatronics and authentic smells. But there are also more conventional sections showing some of the site finds, including skeletons with details of what kind of ailments their former owners suffered from.

You often hear people these days waxing lyrical about how our ancestors, being physically much more active than we are, didn’t get fat and suffer the physical ill-health that’s supposed to follow on from that (but by no means inevitably does). What you don’t often hear is how that strenuous lifestyle wore them out. Jorvik folk in their thirties and forties had the sort of severe bone wear and tear we associate with people much older. Maybe the shitty drinking water wasn’t the only reason everyone drank beer instead.

Getting older was different for our foremothers in particular. Conservative folk tut and frown about several generations of teen mothers in the same family – but back in the day when girls were married off as soon as puberty struck, a great many grannies would have only been in their thirties when the first grandchild turned up. And don’t forget, before the Pill, how many children the average fertile life might have involved.

Evo psych – which is notoriously tricky – speculates that the complex needs of human children meant the more people around to raise them, the merrier; and it helped if the helpers weren’t still raising their own kids – so fertility waned to free up a cohort of older, knowledgeable women as extra babysitters. The Magpie, however, has no brood of her own to bring grandchildren into the picture. Besides, you really don’t want me babysitting unless you’re prepared to be washing glitter glue out of your darlings’ hair for the next month. And have them pick up some interesting new swear words. (Kidding. Almost.)

So how about the ‘wise woman’ side of the equation? I could see myself in the shack at the edge of the village, furry friends in tow (the witch was, after all, the original Crazy Cat Lady), dispensing cures and advice…if my advice showed any signs of being any use to anyone. (You be the judge!) Witches, however, were mistrusted, accused of ill-doings, and ended up with pitchforks brandished at their doors. And if I moved to a shack in the woods, who would Mr. Magpie rely on to rescue him from deadly house spiders? (Not kidding, at all.)

Face it, our culture still doesn’t really trust the older woman. It tolerates her just as long as she doesn’t really look old, and sidelines or insults her if she does. It derides her if she no longer has an interest in sex, and expresses disgust if she does. It definitely doesn’t like her expressing an opinion. (It doesn’t like her doing that as a woman at any age, but it’s way more likely to respond with abuse if she’s not acceptably young, thin or pretty – not to mention white or straight.). We have distinguished older, greying men on our TV screens all the time, but anchorwoman seem stuck in a pre-35 time warp.

Is it something to do with the fact that while there’s an Old Father Time, there’s no female equivalent? As it happens, there is an Old Mother Time, not in our own culture but in India: Kali, the devouring goddess. She’s dark, bloody, wears garlands of skulls and haunts cremation grounds, and she tramples on the corpse of her own husband, Shiva. Cute she ain’t, but she’s the personification of an essential power of the universe: the destruction that makes way for new life and growth. 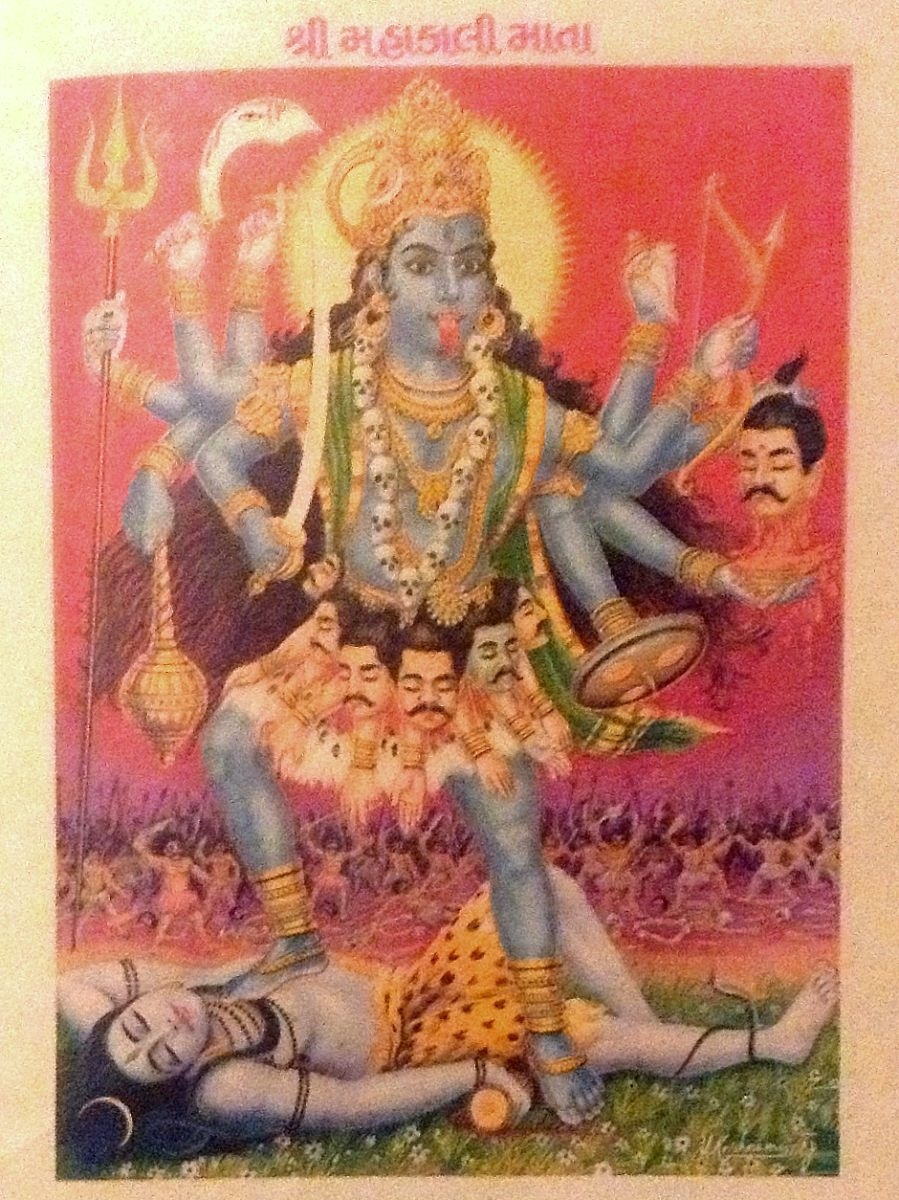 Think about this. Huge numbers of pregnancies are lost in the first trimester – some estimates are as high as 70%. Imagine, if you will, what the planet would be like if there were twenty-three billion of us on it, and you can see why this isn’t as great a tragedy as you might think. In nature, predators keep many species from overrunning the landscape; wipe out a predator species, and you’re pretty soon in trouble. The entropy that makes stars explode, trees shed their leaves and ovaries (ahem) quit the day job is built into our lives, and we attempt to tamper with it at our peril, as every story about the search for immortality makes clear. The gods themselves need Kali to keep the universe going.

Consider some other Crones. Hekate, the three-faced goddess of the crossroads (did the old bluesmen really meet the Devil there, or was it someone darker?), in whose name the witches of Thessaly conducted their dark rites, yet who bore torches as the bringer of light to newborn children. (Some say she was Persephone’s original host in the underworld, and the forgotten third member of the triad with Demeter.) Cerridwen, who brewed a cauldron of wisdom to give her ugly son the kudos he couldn’t win on looks alone, and who flew into a rage when her kitchen-boy Gwion – later the famed bard, Taliesin – pipped her to the post. Sedna, the Inuit mother of sea creatures, scorned and mutilated by her family, who sends the ocean’s bounty to fishermen only if the bravest of shamans dives to her watery realm to comb out her tangled hair. Ereshkigal, keeper of the Babylonian dead, who made Inanna experience her own mortality by hanging her on a meat-hook. Hel, the Norse lady who gave the afterlife’s dark kingdom her name, whose face was half white as fear and half black as gangrene.

None of them could be described as nice, or demure, or obliging, or respectable. What they are is difficult. Obstinate. Uncompromising. And powerful.

Maybe it’s that earlier on in my life, I was even more of a people-pleaser than women are culturally supposed to be, and it’s only comparatively recently I’ve learned to please myself. Maybe that it’s that we’re in a culture that seems, recently, pretty hostile to powerful women, and it’s daunting to take it on yourself to be someone who tries to change that.

Maybe. Whatever happens over the next few years, it’s bound to be an interesting journey…