Children are naturally creative little souls. Actually, so are grown-ups. It’s just that, as Picasso noted, the trick is staying a child as you grow up, and that can be difficult.

Some kids, perhaps a majority throughout human history, have to grow up – in the sense of having to deal with very un-childlike concerns like whether they’ll eat today, where they’ll sleep tonight, and how to avoid being beaten or molested in the meantime – tragically soon. The lucky ones among us were probably, at some point, just told, by parents, teachers or our more sophisticated peers, that we were ‘too old’ for fingerpainting, comics, blanket forts, or imaginary friends. Because kids hate losing face, we conformed.

These days, our governments and their educational policies want children tied to the grindstone of homework and tests as soon as possible, so they can go forth and become good little workers, taxpayers and consumers. That’s a different kind of tragedy.

But humans actually remain kids all our lives on some important levels, and that’s not a frivolous hiccup of development – in fact, it’s vital to our becoming human in the first place.

The secret to our big brains – which, while they may have got us into some complicated messes over the millennia, have also been the source of all our greatest breakthroughs – is something called neoteny. Literally, this means ‘holding onto newness’, and it’s the biologists’ term for an evolutionary tendency to hold on to juvenile traits after you’re all grown up. 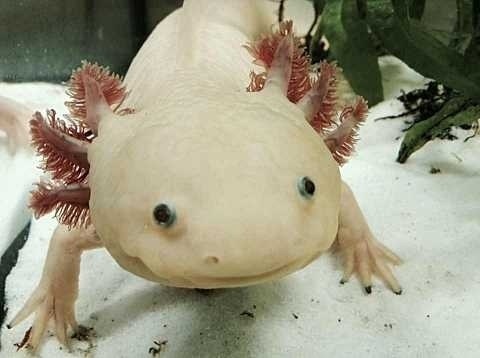 This is one Ambystoma mexicanum, the axolotl. Happy little chap, isn’t he? (Despite being on the endangered list.). These amphibians don’t undergo metamorphosis and live on land, but remain water-dwelling youngsters, with gills, all their lives. It’s believed that this lets them survive harsh conditions in their native habitat, the mountain country of Mexico, because in this form they can get by on less food. A neat tactic.

Humans have done something similar, albeit for different reasons. If we’d let our brains do all the growing they had to do before birth, a human baby’s head would have ended up physically too big to get through its mother’s pelvis. (Let’s face it, many mothers have quite enough trouble in that department as it is.). Instead, we’re born in a fairly underdeveloped state – human babies are much more helpless than their ape equivalents – yet as late as we possibly can be, to give those massive brains of ours a chance to grow even more without the confines of a uterus. And they grow a heck of a lot in those first few years. We also retain, for much longer than our ape cousins, our curiosity, our exploratory nature, our needs to play and innovate. It’s literally made us what we are.

Aldous Huxley, in his novel After Many a Summer, considered – bearing in mind the above – what might be an unforeseen side-effect of the search for eternal youth. Fiddling with biological adaptations tends to have consequences, not all good. Who’s to say that encouraging us to abandon our playful, curious child selves might not have some serious negative consequences?

It’s a good idea to keep in touch with the child who still lives inside you. Yes, she’s still there, however many layers of adult responsibility you’ve piled on top of her, and she wants to be let out and have some fun. Here are a couple of suggestions for a play date.

Safety collage. Children need a few things: food, warmth, love…..Perhaps most of all, they need security. Babies who aren’t cuddled regularly, like the ones in Romanian orphanages, can fail to grow even when regularly fed. It’s as if we need to feel safe in the world before we can get on with even the basic biological processes of living.

For most of us, the people we relied on to feel safe as young children were our parents, or whoever stood in for them. Many parents do a great job of helping their kids feel secure; but sadly, many don’t. Some weren’t raised with physical affection, so can’t give it themselves. Some let their own ideologies or prejudices get in the way of providing real security. Some are good with babies, but withdraw their affection when a child starts to develop a will and personality traits of its own. For whatever reasons, some of us don’t get that reliable base of trust when we’re small, and it carries over into adult life, often in the form of anxiety, self-sabotage, even serious mental health issues.

Children, though, are resilient little animals, and we’re wired to find someone we can feel safe with. Aunts and uncles, teachers, family friends, often provide support and love. But for plenty of us, the ‘someones’ aren’t even flesh-and-blood people. Lots of kids have imaginary friends they confide in. Many find their trusted companions in books, hobbies or interests, toys or special places. Referring to beloved characters as ‘friends’ may be a ploy of the toy marketers, but it’s based on a very real childhood need.

Here’s an exercise in rediscovering that security. First, find a photo of yourself as a child – any age below about ten will do. You’re going to be making a collage, and you probably won’t want to use the original photo, so make a copy or scan. Stick this in the middle of a sheet of coloured paper or card.

Then, surround yourself with images of the characters, places or things you recall feeling safe with as a child. (The Internet makes it a lot easier to track down obscure childhood TV, book or comic characters, although you can cut or copy pictures out of books or magazines if you still have them,or use photos of favourite toys or dolls). Stick them on in whatever arrangement seems right to you. As this is all about the kid in you, feel free to embellish your collage with glitter glue, stickers and any other fun stuff that makes you happy.

This is my version. 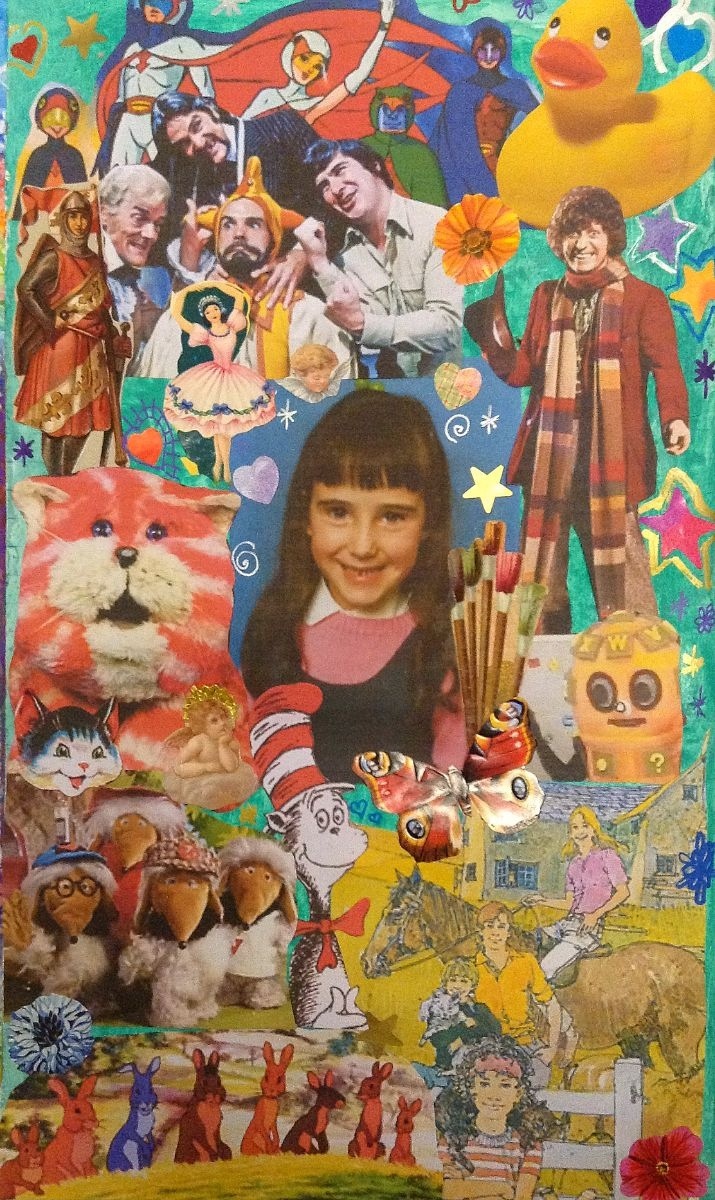 A little explanation may be necessary: Ballet, and the pageantry of the Middle Ages, were favourite forms of escapism at various stages of my childhood. The butterfly is a reference to a particular spot in my grandmother’s garden, surrounded by buddleia bushes, where I could creep in and hide when I didn’t want grown-ups to bother me. The rubber duck was, odd as it seems, the one toy I recall having a real emotional attachment to; I recall acting out his many adventures in the bath. The kids with the big house behind them are the Fieldings from Monica Dickens’ World’s End books, who inherited a run-down country pub and turned it into a sanctuary for stray animals, a lifestyle that seemed idyllic to me. Dr Seuss was how I learned to read, so you can blame him. The rabbits are from Watership Down. And young folks may not recall Bagpuss, The Wombles (surely the root of my DIY recycling philosophy!), Wordy from Words and Pictures, Num Num the cat and his family from Playhour comic, Battle of the Planets, Rentaghost or the older incarnations of Doctor Who, but trust me, the characters mattered to me every bit as much as Peppa Pig or Clarice Bean to today’s small people.

Yours, of course, will vary – we all had different childhoods. Whatever and whoever you choose to include, when it’s done, put it up somewhere where you’ll see it regularly, and see if it doesn’t make the kid in you feel reassured. It might inspire you to dig out your teddy bear or the books you used to love. (And if you want to spend some quality time with any of those beloved retro TV characters, there is always YouTube.)

Not just for kids. Think back to the activities you used to enjoy when you were a kid. What were you like then? What did you most enjoy doing – or would have done, if those pesky grown-ups hadn’t stopped you? You’re a grown-up yourself now, remember, at least on the outside, and you can do what you want (well, within legal limits, anyway), so think back and make a list of those juvenile pleasures.

Reading.
Sorting through boxes of old jewellery, beads or buttons. (I knew a haberdashery shop that had a massive chest of miscellaneous buttons…I used to adore rummaging through it. Shiny things!)
Digging in the garden (you could unearth bits of broken china if you were lucky).
Beachcombing.
Messing around with bits of cloth and paper and yarn. (I once, memorably, got caught by a teacher at my infants’ school trying to smuggle home a bundle of cloth scraps from the collage box. Thankfully, she was sympathetic and, after a little chat about the importance of sharing, let me take a few of them.)

Now ask: how long is it since you did any of those things – or something similar? You may not live near a beach (the Magpie is sadly landlocked in her current location), but how about a trip to a boot fair? Same kind of outlet for the scavenging instinct, whee! As for the cloth thing, I’m surrounded right now by scraps from various fabric stores in the process of being patchworked into something new and fun. Goddess bless that teacher, she knew what she was doing. 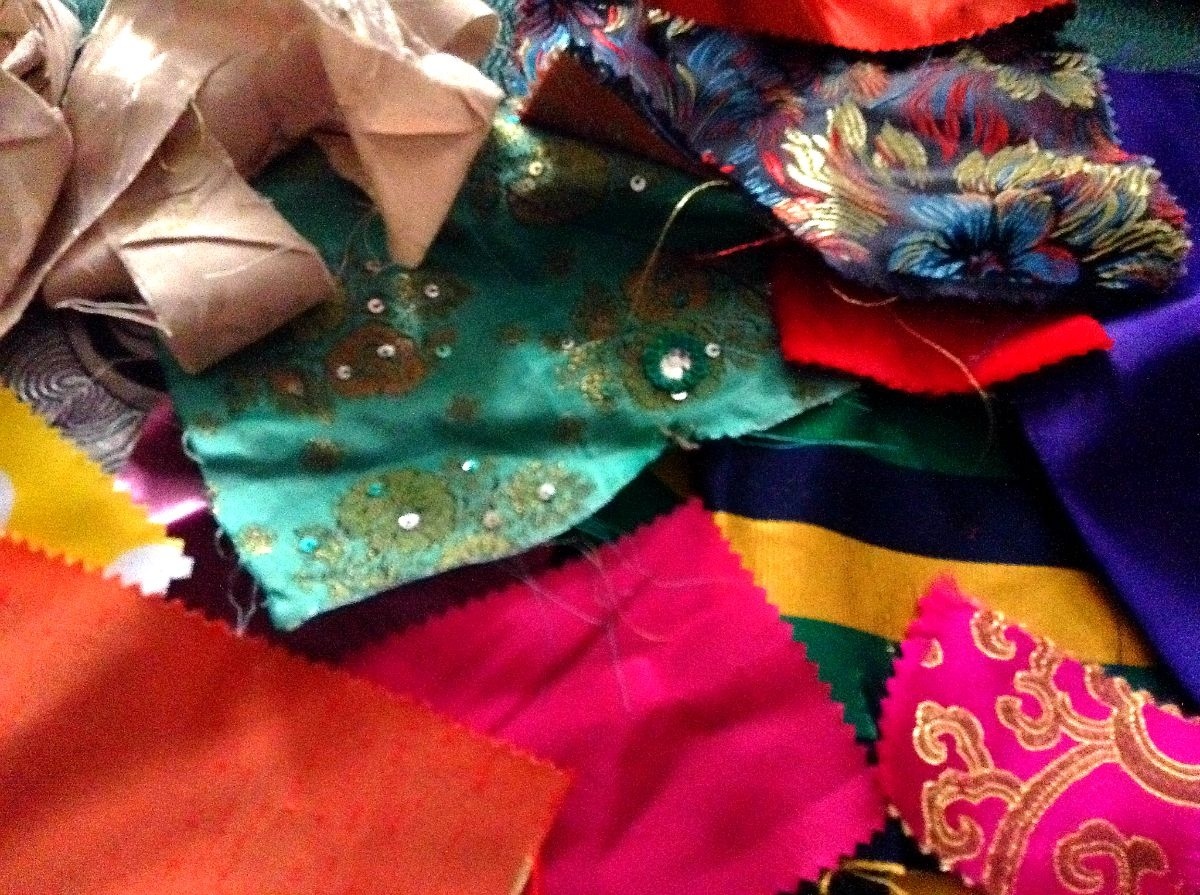 How can you treat your inner kid to some of her favourite things? Whether it means taking her for an ice-cream (with sprinkles, obviously) building a den, or breaking out the finger paints, try to find something that lets your adult self take a break for a while. After all, there’s no point in being grown up if you can’t be childish sometimes. (I leave it to you to work out which of my childhood comforters said that….)