The Magpie isn’t generally one to namedrop. But (this is relevant, honest) it just so happens it’s been my privilege to meet Neil Gaiman. Twice.

The first time, it was at an American Gods signing in Norwich. Mr. Magpie and I had managed to get in near the front of the queue, since we had to dash off to attend a Morris dancing event later in the day (long story). Neil was thoroughly charming. I was thoroughly fangirly and tonguetied.

The second time, it was at a Coraline signing in Canterbury, and it was a ticketed reading, so we got to listen to the master doing his best Scottie dog impression while a thunderstorm raged outside. Now that, my friends, is atmosphere.

On signing my copy, and on hearing that encouraged by his example, I’d been submitting some of my stories to magazines – and getting some encouraging rejection letters (trust me, there are such things) – he gave me the following sage advice. 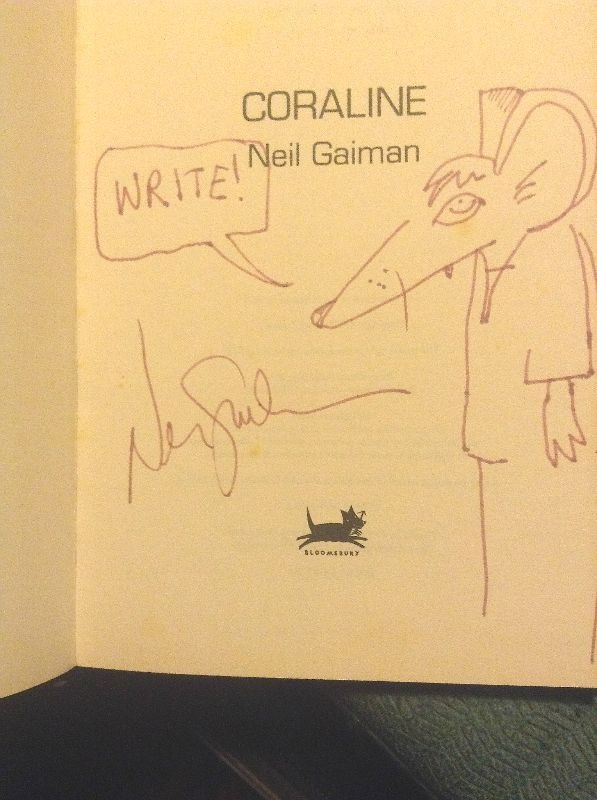 (I don’t always follow this as well as I could, but hey, I try.)

Winding back slightly, I first discovered Mr. Gaiman’s work through picking up a copy of the ‘Season of Mists’ collection during my idle wanderings through Forbidden Planet in London, way back in the 90s. Believe it or not, I was out of touch enough with the comics world that I hadn’t encountered Sandman up till that point.

I’d rather fallen prey to the old notion that comics were for children. And while at nine or ten I’d been a fan of the Beano and some slightly more sophisticated bits of sequential art (the Asterix and Tintin series were mainstays of the children’s library in my home town), over the years I’d grown into books without pictures.

(There’s an interesting question: why do adult books generally lack illustrations? It was adults, after all, who created, and appreciated, the Egyptian tomb paintings, the Bayeux Tapestry, the cartoons of Hogarth, all of which are basically stories told in a sequence of pictures with the addition of a few words. My guess is that the words-only book is a hangover from when authors had to convince the world that fiction, novels, were Serious Adult Business rather than frivolous entertainment. These days, while the Web merrily mixes media, the advent of e-publishing means book artists are playing with the things only hard-copy books can do – whether they’re for reading or not.)

Back to the story…I’d failed to notice that there were things stirring out there that most definitely were not for the kids – until now. This wasn’t the Zap! Kerpow! superhero stuff that most of the comics section was focused on. This was a story about the key to Hell, populated by angels and demons, Norse and Egyptian gods, Order and Chaos (represented by a cardboard box and a giggling little girl, respectively), fairies who weren’t your mama’s Tinkerbell, dead schoolboys…and Dream, Morpheus, the Prince of Stories, a mysterious dark anti-hero with scruffy Robert Smith hair.

(It has been pointed out, over the years, that Morpheus may bear a slight resemblance to the creator of his own story. Having met Neil, I can, however, confirm that he’s a lot less severe, and does indeed, as pointed out in his author bio, have what are generally known as ‘eyes’. His hair, though, has its own alternative dimension – and its own book.)

Over several years, I acquired the other volumes of the series (I’m not a person who can read comics one at a time – I like the concentrated read of a graphic novel), and became better acquainted with Dream: his history, his captivity, the humans and other beings whose fates entwine with his, the unfortunate fate of his son Orpheus, his dealings with the Endless, his family of siblings – who all, aside from his chirpy Goth big sister, Death, seem to make his existence more than necessarily complicated – and finally….but I won’t spoil it. Let’s just say that Sandman is a piece of modern mythology you really need to experience for yourself.

Since then, Neil has written a plethora of books and stories (and a couple of Doctor Who episodes, which even without any of his other achievements has got to be the coolest thing ever), many touching on the essential place that stories have in our lives. I read somewhere that he was once asked, at a con: ‘Do you have any spiritual beliefs?’ He answered ‘Yes.’ It’s something that’s been the subject of much speculation – while he’s of a Jewish background, he also happens to have been raised by parents who were among the UK’s most senior Scientologists, although he’s said he’s no longer associated with the organisation – but perhaps his real belief is in the power of Story itself, and the way it can take on a life of its own.

Anyway. In 2012, Neil was asked to make a commencement speech at the Philadelphia University of the Arts. Procrastinator that I am, I’ve only just gotten around to watching the entire thing. It’s also available as a snazzy little book, illustrated by the graphic artist Chip Kidd, which I just acquired. If you haven’t already heard this speech, I encourage you to do so:

I’m glad Neil mentioned the value of making mistakes here, because I think without that, the idea of making good art might be somewhat intimidating. Good art being the stuff you love, that sets you on fire – not necessarily, as he also points out, the stuff you think will make you money. But to make good art, you have to be willing to make bad art. And you don’t know before you begin which it’s going to be.

So what do you do? You make art anyway.

When your mother dies, and it’s hard, not because she’s died but because you never had the relationship with her all those sympathetic people think you should have had.

When your cat dies, and it’s harder, because she meant way more to you than people think she should have done.

When your landlady suddenly notices house prices are going up and decides she doesn’t want tenants any more.

When your husband loses his job, then gets it back again.

When a relative is diagnosed with breast cancer.

When the local media prints rumours (thankfully, untrue ones) that suggest your own day job may be up the you-know-what.

When you’re blessed with the kind of brain that, sometimes, can’t get hold of enough neurotransmitters to stop you from wanting to engineer a premature meeting with the aforementioned chirpy Goth girl.

When the earth is overheating, and the bees are dying, and Gaza is lit up every night by rocket flares, and people in Liberia are bleeding their lives out of their tear ducts, and politicians smile smugly as they declare yet another group of people to be undeserving of help and support…. 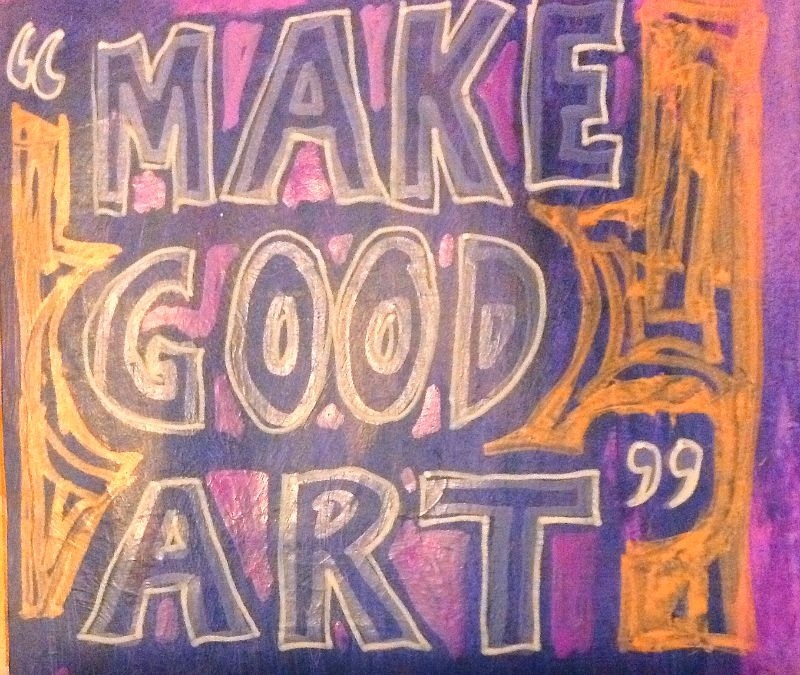 We do what we can, practically. But even if there’s not much else we can do, we can make art. We can put our sorrow and anger and confusion and fear (as well as our joy and gratitude and relief, when things go well, because life isn’t all doom and gloom) into making something.

Sometimes, some of it might even be good. I like to think so. And the more of it you make, the more chance that’ll happen.

And in the meantime, you could always try chicken and telephone ice cream.*