I have a confession to make.

I’m a terrible procrastinator. But I’m working on it.

I think the key to understanding procrastination is recognising that it’s not usually about laziness. OK, we all have moments when we just feel like vegging out; everyone needs down time. But when you desperately want to get on with something creative, but can’t bring yourself to shift your butt – or worse, you can, but only in the direction of the myriad of evil dust bunnies that suddenly call your name from every corner of your home….. those are the times when you know there has to be more to it than just being plain idle.

I think of it as an unholy trinity of Ps: Paranoia, Perfectionism and Procrastination. If it helps, envisage them as the three bitchy friends from that clique who tormented you in high school – because I don’t know about you, but at times like this, my inner creative self seems stuck at awkward teen nerd level.

Paranoia sidles up to you and whispers ‘What do they think of you?’ (News flash: most of the time, people are too busy with their own paranoia to be thinking about you, and the rest of the time, there’s at least a fifty-fifty chance they actually think you’re pretty cool, and if they don’t, they’re not worth your while worrying about. Remind me I said this next time the doubts hit me.)

Perfectionism chimes in with ‘Yeah…your painting style’s not up to much, is it? And your grammar was out in that sentence. And you fluffed a chord in the second verse of that song. And you don’t meditate enough to be really spiritual. Also, your clothes look like you got them off a rubbish dump, and you have a big zit on your chin.’ (Your mileage may vary, but everyone has their own sore points.)

Procrastination finishes the hatchet job. ‘You know you can never get it absolutely right,’ it points out, ‘so why even bother starting? If you don’t do anything, at least you can console yourself with how well you could have done it. Put it off till this afternoon and you’ll be able to fit in another dozen games of Bejeweled Blitz….’ (No, of course I’m not linking to it. That would be tempting fate.)

To banish the power of this insidious trio, you have to start at the root. And to do that, we have to accept the fact that as human beings, we’re not, and are never going to be, perfect. It’s not in our nature to be.

Isn’t that the whole problem with the world? You could see it like that. In Christianity – on which our culture is, after all, founded – the Fall, the moral spoiling of the human race, was traditionally seen as a Bad Thing. You could speculate on what it’s done to our collective self-esteem, to be told for two thousand years that we were collectively responsible for God having to die a horrible death.

But on the other hand, the redemption of humans by that same death was definitely a Good Thing. Yet the second wouldn’t have needed to happen without the first. So maybe the Fall was a Good Thing after all? Some churchmen dared to think so, calling it felix culpa, the happy fault. The medieval carol, ‘Adam lay ibounden’, expressed it thus:

Blissed be the time
That apple taken was;
Therefore we moun singen:
‘Deo gratias!’

The anchorite Julian of Norwich, in about the same era, wrote in her Shewings that ‘Sin is behovely, but…all manner of thing shall be well.’ Mistakes were inevitable, or as we might say, shit happens, but God could bring more good out of them than could have been possible if we’d stayed perfect. Not that you shouldn’t try and relieve suffering where you could – Julian was, like many anchorites, a sort of unofficial agony aunt for people passing by her cell – just that when we screwed up, like a good parent with a little kid who keeps falling over as it learns to walk, God didn’t hold it against us.

Christianity isn’t the only path to point out that the mistakes, the messy human stuff, may be an essential part of the package. In the Jewish tradition of Kabalah, the world couldn’t have been created if the original perfect unity of the Godhead hadn’t been shattered. Seems you can’t make an omelette without breaking the cosmic egg. Buddhism refers to the imperfect nature of life as dukkha – literally, a squeaky wheel (think on that, next time you get lumbered with that supermarket trolley) – and far from its escapist reputation, advocates accepting the imperfection as the way to liberation. Samsara (the ups and downs of life) is Nirvana (ultimate liberation), and vice-versa, says the Heart Sutra. It all depends on your viewpoint.

Speaking of Nirvana, here’s another thing. For many years, I thought I couldn’t play guitar. This wasn’t helped by hanging around with people who were into Steve Vai and Yngwie Malmsteen. Guys whose playing had the sort of spot-on, lightning-fast technical precision that scared me spitless. They may be fun to listen to, but they can make a fumbling beginner feel like your fingers are made of string cheese. 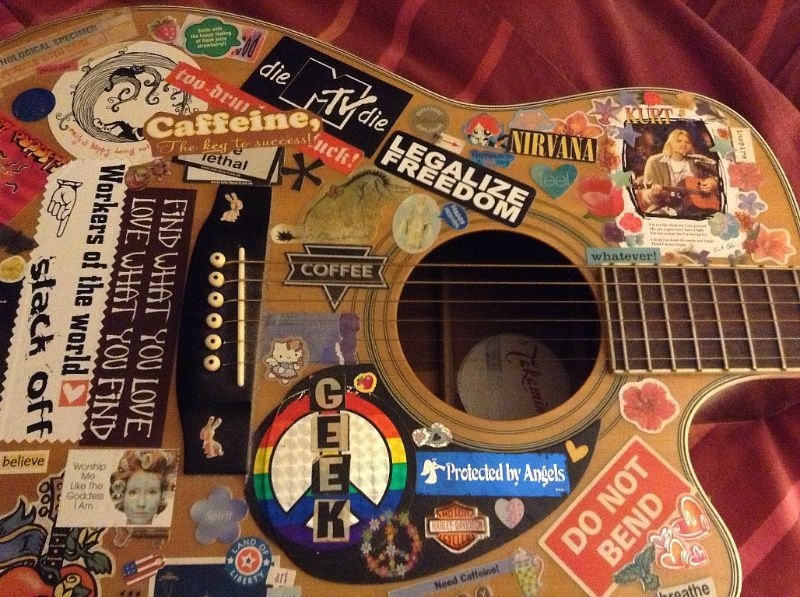 So how did I actually gain confidence? Enter a scruffy little blond guy from Aberdeen, Washington, who didn’t give a toss about precision, but did know how to write a stonking good tune, and how to give vent to emotions in such a way that even if you’ve never spent your teen years living under a bridge (and if you check the facts, neither did he), you get it. Kurt Donald Cobain had been dead for ten years before I woke up to the power of his playing, but I’m not the only person who’s listened to his songs and realised that you don’t have to try to be note-perfect…and that, paradoxically, that frees you to go ahead and play anyway. (Not to mention it not really mattering if you had gotten your clothes off a rubbish dump.). Punk, Kurt pointed out, was about playing what you liked, how you liked, ‘as long as it has passion’. Amen to that.

Traditional Japanese culture doesn’t do grunge, but they do have something called wabi-sabi. This untranslatable term refers to the beauty of impermanence and imperfection, the acceptance of the limitations of earthly life, nature and human creativity. It’s about finding aesthetic appeal in things that are roughly made, simple, or worn by age, use or the weather. A good antidote, I think, to the modern world’s urge to have everything shiny and new and replaced by an even newer model as soon as it starts to look unfashionable. (The Skin Horse, from one of my favourite children’s books, would point out that this applies just as much to people; the most loving souls are generally a bit bedraggled,and no less loveable for it.)

A related term comes from Japanese pottery. Vessels broken in the workshop might be patched back together, visibly and obviously, with lacquer mixed with gold used to emphasise the cracks. It’s known as kintsukuroi. The poet Gwyneth Jones, and the ceramic artist Grayson Perry, who’s used the technique himself, have both seen this concept as a powerful metaphor for the unexpected beauty of the imperfections in our own lives. 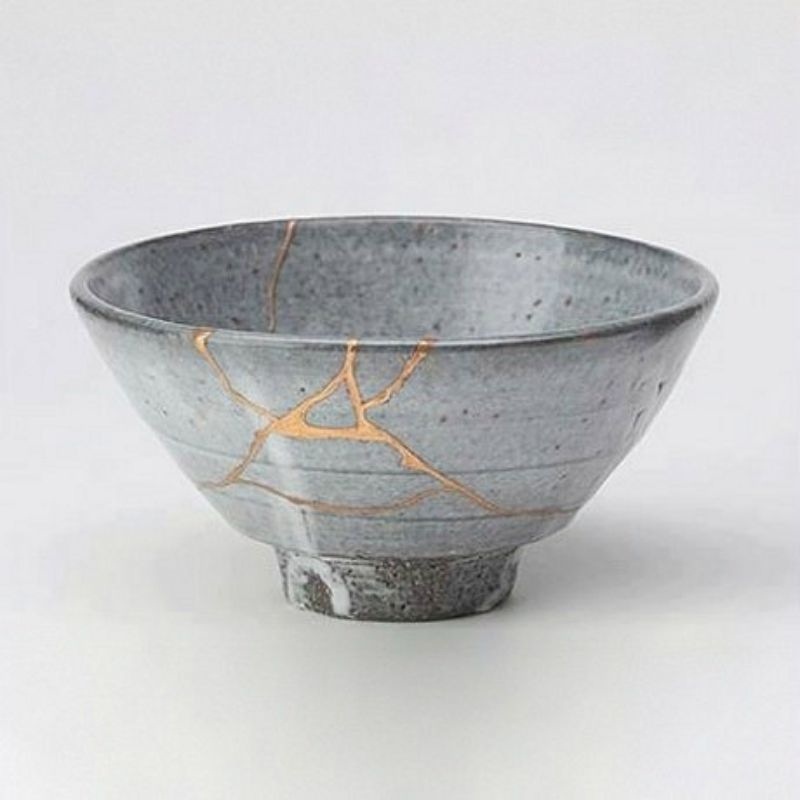 There is, says Leonard Cohen in his classic song ‘Anthem’, a crack in everything; that’s how the light gets in. Maybe the trick is to realise that our flaws and failings, far from making us worthless, are what open us up to the world and to Spirit. If we create from that vulnerability, other people will see the gold where we’ve patched ourselves together, and hopefully see their own human and creative worth.

(And if this post has wandered around in a somewhat haphazard manner…so be it. I could try and make it perfect, but if I did that, I’d never finish it…)